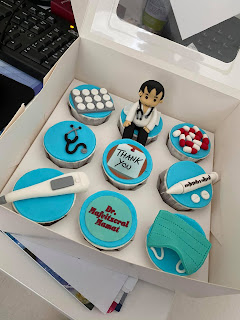 Rare occasion when an anaesthetist is celebrated by the patient. Of course smiles all over, such a warm feeling :) It was a year ago the baby was delivered via caesarean and Alhamdulillah, all is good :) 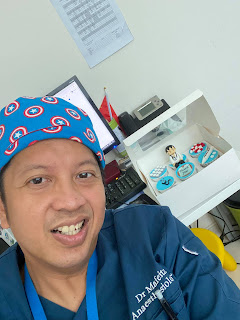 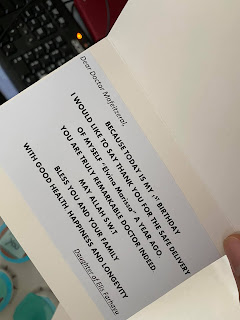 Email ThisBlogThis!Share to TwitterShare to FacebookShare to Pinterest
Labels: private practice, so you wannabe an anaesthetist 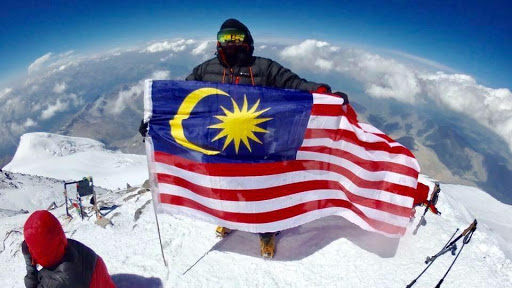 To all my readers out there ( honestly i dont think people read blogs anymore.. haha especially the erratic ones like mine nowadays!)
MALAYSIA DI HATI!! 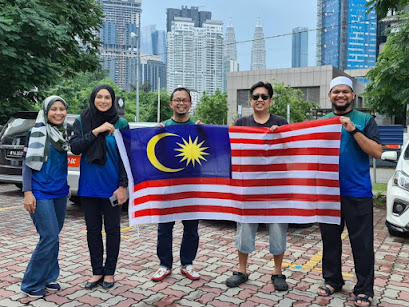 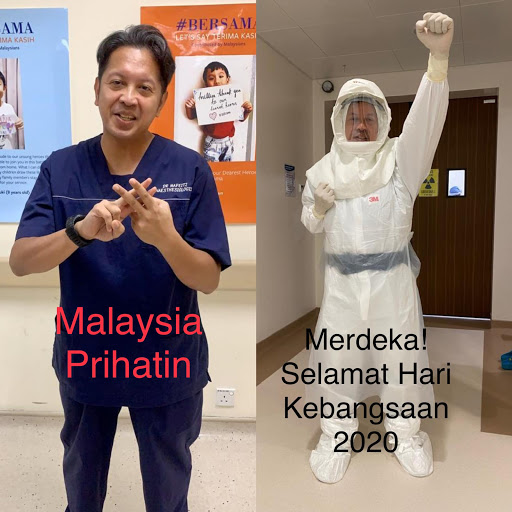 Since the MCO has been extended till the end of 2020, i would reckon there will be no more overseas trip for me this year! Luckily had mine in January and February...
But Insha Allah, there will be summit to be reached in 2020 :)
Posted by mafeitz at 11:55 am No comments:

The cool online workshop we had SIGRA

It was a project where SIGRA approached the industry to have it done. It was the first ever done in Malaysia and preparing for it was not easy. It was the pinnacle to showcase how in private we do blocks too and its a skill which is needed in private practice.
Alhamdulillah it went well with the excellent support of AV which transmitted us live during that weekend. Luckily we managed to get a last minute patient to show instead of the pre recorded version that we did as Plan B.
Certainly enjoyed the stint and looking forward to future online live workshops :) 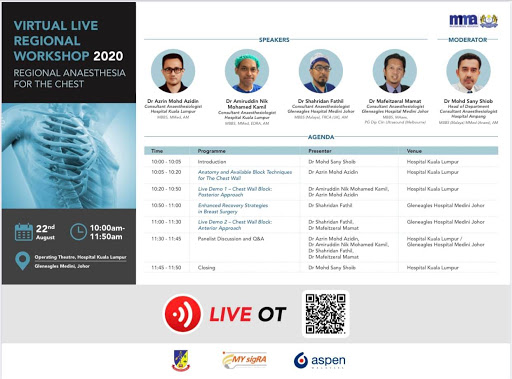 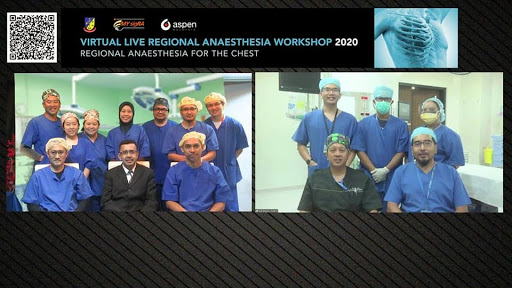 Email ThisBlogThis!Share to TwitterShare to FacebookShare to Pinterest
Labels: #Diagnosis2, interest, private practice, so you wannabe an anaesthetist

Better late than never! It was celebrated on a lower key but nevertheless good food and spirit saves the day😊 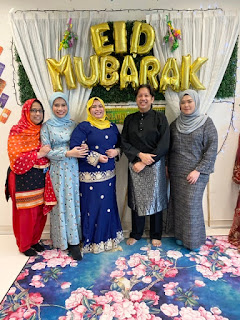 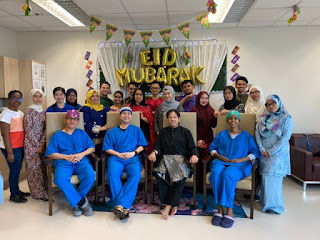 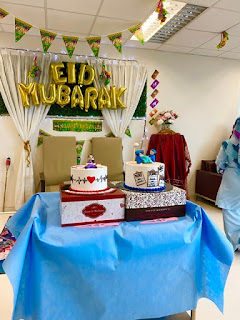 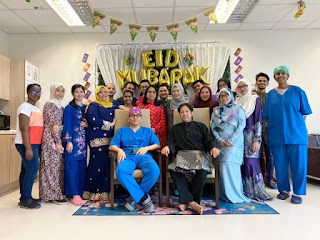 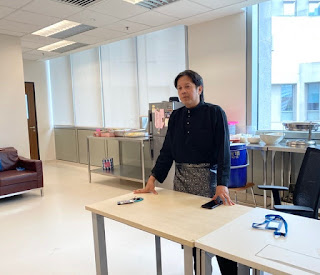 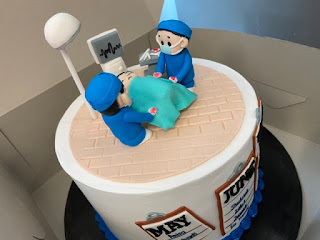 Posted by mafeitz at 8:56 pm No comments:

Email ThisBlogThis!Share to TwitterShare to FacebookShare to Pinterest
Labels: Anaesthesia, JDT, so you wannabe an anaesthetist

A new thing that i discovered during this pandemic is webinars. I dont think we will be able to attend conferences in the near future because of its social gathering; the latest SOP allowing up to 250 for meetings/seminars/conferences.
I attended few of these webinars which can be interesting. I was given the opportunity by this new company teying to penetrate Malaysia to deliver educational talks online globally. The nervousness i felt last night was the same as how presenting at an international seminar. I enjoyed the session anyway😊
I guess for now, this is the only way to spread knowledge from home! 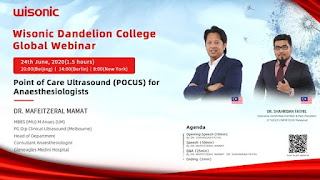 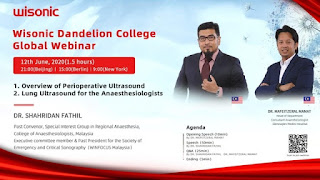 Email ThisBlogThis!Share to TwitterShare to FacebookShare to Pinterest
Labels: Anaesthesia, interest, so you wannabe an anaesthetist

Its mid year now. Mid year 2020 !! Just like that... Wow time flies so fast and the world is still guarded with the Covid19 Pandemic that has changed a lot of ways of life.
The MCO has been lifted to another jargon of PKPP. International borders are still closed and Im sure till end of the year. Hence, it will be sometime before we can all go travel abroad.. to places where we want to explore.. 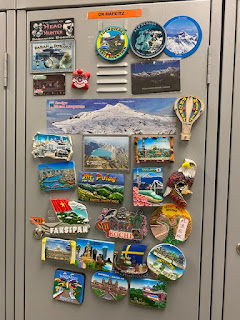 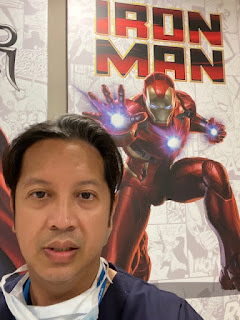 2020.. Certainly a year and time to remember for the current generation. The real struggle and war against the unknown.

It was supposed to an epic wedding. My younger brother marrying an egyptian girl and the reception was to be held in a famous Cairo park in Egypt. The whole family was there in Cairo few days before the weddding as planned. The kids were all excited and the trip to Cairo was sort of a dream for kids in exploring the pyramids and the mummy museum.

Unfortunately the world was in crisis at the very same time. The unknown attack of a deadly virus that crippled the world slowly starting from Wuhan. In Europe the death rate of the Italians and Spanish were unbelievalble and the world did not really know how to respond. This wedding was planned months ago and in a way it was a risk that the whole entourage took. Because it was family and family comes first. 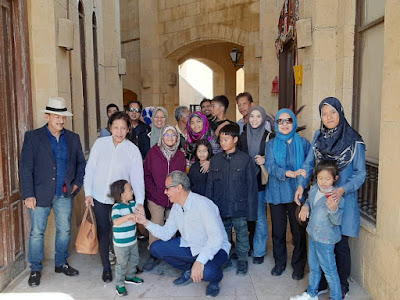 It was heartbreaking when on the same day as we arrived in Cairo, the lockdown was to happen back home. That was not too bad considering that we would just have to follow any procedures that is demanded by Malaysia. The surprising news when at that very night, Egypt announced that it will close its borders to everybody in the next 2 days! Nobody expected such announcement looking at Egypt's situation then which was not as serious as Europe. We were thinking it would be the week after.

It certainly brought unrest to my brother who had to make the decision to get all of us back home before the closure. He asked me, and I immediately told him. EVAC. You certainly dont want to be stuck in Egypt during these times. I was here during Ramadhan years ago during their standoff with Gaza and it was not an encouraging scene. Not in Cairo.. not in Egypt!

Alhamdulillah, we managed to get the flight out after a very short stay in Cairo. But we had too. I pity Meng on his plans for the family and the wedding which had to be cancelled. It was unsafe times.

Alhamdulillah, he is married now to Reem. My doa that they will be together till Jannah and may they bring me more nephews and nieces :)

Salam Aidilfitri from the MDQS:)


It was a moderate Aidlifitri. We are in the midst of CMCO. The earlier ruling allowed husbands to go back to their families but the recent rush of balik kampung by families who were trying their luck made the MKN to void the earlier announcement. That made me a bit worried if i was to denied my travelling back to KL. I book my flight on the even of Syawal!! However, knowing how Malaysians can be I had my permit done earlier on the last week of Ramadhan. Alhamdulillah, I was let through with the police permit but not without tight and strict filtering. Redha je if they did not allow me to go back because they are just doing their job. I had my papers done so officially I've done my part too.


On the eve of Syawal we continued the traditional routine of family takbir in Taman Tun. This was very significant this year as there were no mosque activities since March and the whole of Ramadhan. A very weird Ramadhan for me to experience in my lifetime. Perhaps, for any muslims in the last few centuries!
Alhamdulillah, it was enlightening to see my son leading the takbir and prayers. I have always 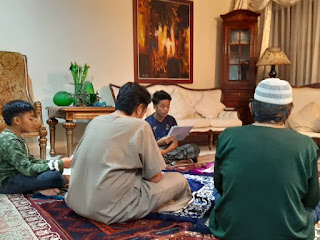 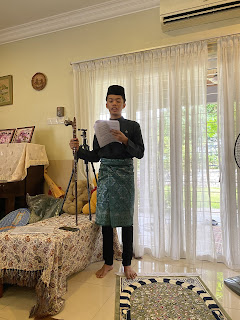 encouraged him to do so since his younger age and of course my 9 year old boy! Haha Mizan has always been disinterested but i reckon he realized how in this family, as a male he will always be obliged to be the leader. And alhamdulillah, he recited it well (as he had practiced vigilantly under Qayyum in the last week of Ramadhan)


Again, Aidilfitri prayers was a first for all Malaysians to be performed at DJ home. Either the HEad of the house or the most learned male to lead it. I had Qayyum to do it and it was very encouraging to see him fairly comfortable in this role especially the sermon post prayers. He is ready to go out there! 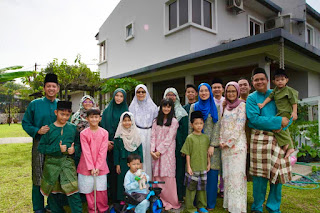 A simple Raya: just close family gatherings and no ziarah. Alhamdulillah, eventhough it was modest but it was a very meaningful CovEid 2020 :)

2020. What a surprise it has been. Who would have thought in 2019, what is currently happening at the moment. Thw whole world has changed with the introduction of Covid19 - a smart bio terrorism agent impairing all including the superpowers of the world. The war that the whole 8 billion human population had to endure with ;- silent but very damaging maybe not so much on the mortality rate but more of the uncertain future it has pose to the next generation.

I glanced through my blog from 10 years ago. The content was very raw- honest life experience as how I felt there and then. How I have progressed and am at where I am at the moment. Still relatively young, there are more years to come godwilling. I reckon its very unfortunate that I may not have been active in the last few years on the blog ( I blame it to other social medias! FB, twitter, IG) as these medium may have occupied my time in browsing rather than expressing myself.

I used to blog during my calls, in between patients as it was pointless to try to sleep when your mind was very active even in the wee hours of the morning. Nowadays, I guess its age factor as well, I don’t seem to sit down and throw my thoughts in this space of mine. I wonder why.. is it that my life has gone plateau that I don’t find it interesting to pen my thoughts anymore?

One good thing I reckon I achieved through blogging was somehow it improved my written english. Eventhough there’s no teacher to correct my grammar or pinpoint where I can make my writing more interesting, it has evolved so much. My flow is definitely better than what it was 10 years ago. I was very surprised the other day when the story that was published was my own. Ie the editor did not change much my sentences and flow! Interesting!

It has been a very eventful year for me too. My Aconcagua trip to the unlucky short visit to Egypt for Meng’s wedding; and then the MCO with my Covid fellowship in Sungai Buloh. Who would have thought we are banned from going to the mosque to perform Friday prayers and the ususal ingredient of tarawikh in mosque has since become a distant memory. No wonder the keyhome message from the China Medical team (during their visit to our country) was cherish your time.. cherish your family. Its true because I have a feeling, things are not going to be the same again post Covid19 era.
Posted by mafeitz at 9:24 pm 1 comment: 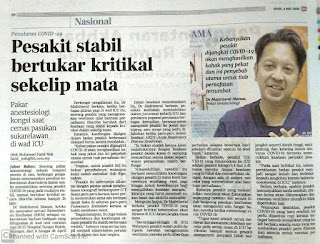 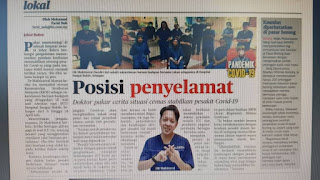 Posted by mafeitz at 9:41 pm No comments: