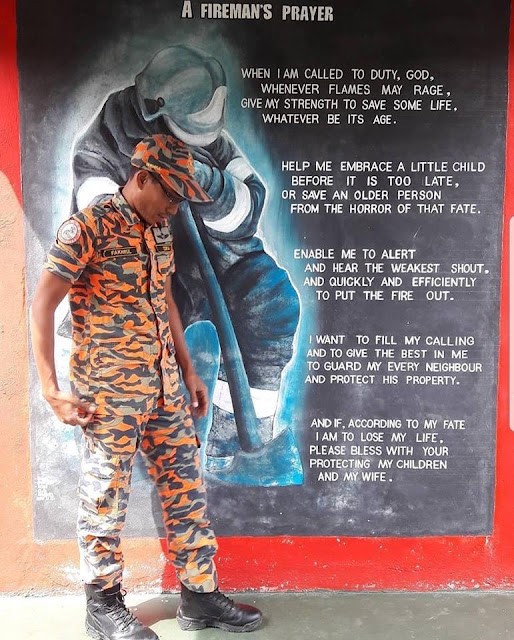 It was a sad week. Initially the devastating quake in Sulawesi, and we then lost 6 brave fire & rescue personnels in Puchong.
It was sad to loose these heroes.
I will not go into the controversies around the tragedy for now but it was the reality of their job. They will put their life in the line of fire (literally) and this incident showed just that.
Alfatihah

Posted by mafeitz at 4:34 pm No comments: Links to this post

Posted by mafeitz at 8:22 pm No comments: Links to this post

I was asked to do a review on this movie, "lama dah you tak review movie eh?". I watched this yesterday, at noon ( ponteng kerja kejap hahaha). My expectations before the show? Well, The trailer was good but how many times have we been fooled by awesome trailers especially malay movies. I was crossing my fingers hoping that PASKAL will not receive the same fate. I rate PASKAL highly because I have had the opportunity to be with them during TRYLA many years ago. Our own "Navy Seal" if one wants to compare.

I went in without reading the full review, saw the ratings and thought hmm should be good. and..

The plot:
The plot was how you expect it to be. Good vs evil and how evil stemmed from injustice of the system (lateral thinking) - Cite Batman & Black Panther pun same theme. Nobody is wrong and nobody is perfect. The 2 big incidents were based on 2 true ops and that gave the goosebumps while watching the events.
The characters were real and the dialogue were not pretentious. Seeing the flashbacks of their training an initiation was surely heartwarming. They are the best! I wished that we could have seen the test of throwing them in the middle of the sea with all limbs tied, and waiting them at shore. Imagine berenang macam tu!!

The action sequence:
I must praise the  meticulous details being given attention to on the weapons and assets of TLDM that was shown. It was as real as one can get. Submarine tu cool habis :) I guess having the Navy and PASKAL themselves breathing down the producers neck, they have to produce this perfectly. It is our special forces dignity at stake! True enough, the director brought justice to this piece.

Action sequence were hollywood standard. Check it out Tom Cruise!! I had the thought that we might go Hong Kong style where the action sequence maybe good but there will always be something missing unlike the Hollywood action flicks. But PASKAL wasn't Hong Kong! Betul cam hollywood siot.. Hahaha Okay, they maybe some logic stuff you would want to consider but hey, tengok Rambo lagi mengarut oii.. Give credit to our own local production! Thumbs up!

Overall it was an enjoyable movie. I maybe biased because I love Malaysia but seeing our special forces being given the honour to be potrayed as such in this movie, memang tersentuh :)

Posted by mafeitz at 7:00 pm No comments: Links to this post