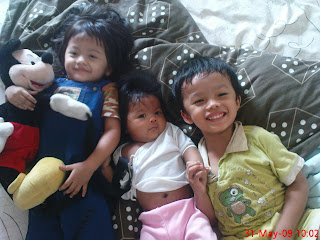 I would like to wish all fathers , a very father's day !
Fathers are traditionally not celebrated as mothers do ; something which is changing with the shift of role and responsibility nowadays. I am a dad myself and honestly, I was never ready to hold such big responsibility. One learns as one moves on with life; one of the realizations of conscience. 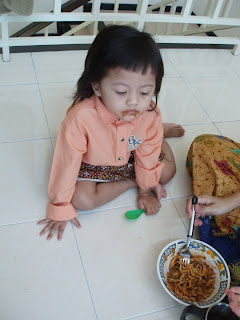 With wifey's bad obstetric history, I never imagined being in my position right now. Three kids who are 2 years apart in between! All growing up so fast within a flash. Seeing them develop and acquire new skills is a pleasure and not to be missed. You can see how much of you and wifey's trait in them be it directly or not!I never fail to laugh and smile seeing them with their antiques!
At the same time , it is a bit scary to think that they will become teenagers and adults soon; getting into trouble and dealing with their decisions. My experience tells me that their life will be colourful and plentiful as well !! Hahahaha bahaya ni.
Will i be a supportive and responsible dad? Huhuhu... Insya Allah... 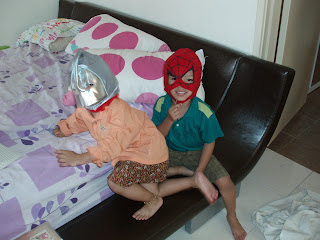 Posted by mafeitz at 3:30 pm No comments: Links to this post

'Would you tell me, please, which way I ought to go from here?'
'That depends a good deal on where you want to get to,' said the Cat.
'I don't much care where --' said Alice.
'Then it doesn't matter which way you go,' said the Cat.
'--so long as I get somewhere,' Alice added as an explanation.
Lewis Carroll, Alice's Adventures in Wonderland

Keep away from people who try to belittle your ambitions. Small people always do that, but the really great make you feel that you, too, can become great.
Mark Twain
Posted by mafeitz at 2:43 pm 1 comment: Links to this post

Preparing for busy days ahead..

I'm currently in the midst of preparing my oral presentation for our biannual ASEAN Anaesthesia Congress in KK this July. Completing the study was a relief and preparing a presentation to defend my findings is no joke ! I am lucky that my supervisor , Prof Lucy is very supportive and I've been seeing her very often these days !She is very thorough and in a way it was fun going through my data and facts with her !! Hahahaha There are countless versions of my presentations as I need to make major changes after seeing her every week! However I don't mind at all because I know that we are doing this so that my presentation would be perfect..( heheh as much as how I want it to be). It is of great honour to be chosen and in contention for the Young Investigator's Award. It has been quite some time since my last involvement in an academic challenge. I have this knack to present and enjoy doing it at the same time !! 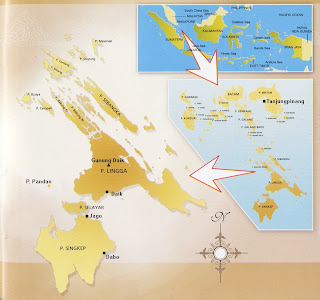 I am in a bit of rush because I will be going to Lingga Island, Riau Indonesia with the USM oralmaxillofacial team end of this month. I felt honoured to be invited by the faculty to be ap art of the team who will be doing cleft lip and palate repair surgeries for the under priviliged in Riau. It will be an eye opener and interesting trip as how I enjoyed my Palembang visit last year! The trip will be cooler this year as the bulk of the trip would be on ferry to the Riau archiplego! I can't wait for the trip really.. of course a lot of stories and tales to share !
The only drawback is I will not be completing my first ever 42km marathon ! Although I've registered ; I reckon that the Indonesia trip is something I should not miss. The current event will only encourage me to do the Singapore marathon in December.. hehehe ada berani ??
Posted by mafeitz at 10:39 pm 1 comment: Links to this post

Getting nearer to the bridge 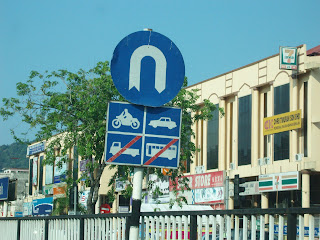 Which bridge ? Nope ..not the crooked one I assure you!
Judgement day is getting nearer you see.. my finals which is in May next year. Time flew really fast and not knowing it, I'm in my final year now. Only 1 more year of training to go. The past 3 years passed me without halt. I can't imagine myself being the senior most trainee in my current institution ; i guess i am now the person i looked up to during my early years in the programme. I am a bit anxious but at the same time thankful as the journey I embarked is not something that I regret at all. I've been enjoying it in a way ; taking one step at a time.
Its every medical students priority to straight jump into specialty once the housemanship training was over.Its not as easy or idealistic as how we imagine it .. or perhaps plan it to be! For instance nyself , I was inclined into Paediatrics that i had my try in the Part 1 MRCPCH! My initial plan in joining anaesthesia was to develop the acute care skills which i thought important as a budding paediatrician then.. Allah was great and somehow i got hooked and Anaesthesia is my life now.
A lot of collateral things happened as well. I've 3 kids now which was a total wonder compared to 4 years ago! That itself changed my perception about responsibilities and I am stil learning to be a good parent if not as how my parents were. At the ame time , I had a quantum leap in terms of healthy living where I am back to who I was once upon a time! That wold explain my blog coverage which when i browsed back seemed to beconquered with my physical activities instead of my anaesthesia !
I can only thank Allah for al his blessings so far and I live as how I want it to be , Insya Allah.. :)
Posted by mafeitz at 10:23 pm 1 comment: Links to this post 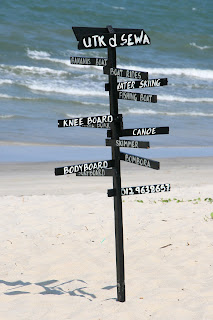 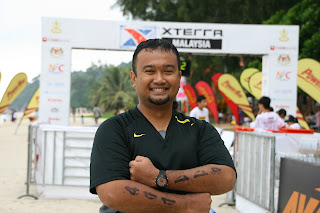 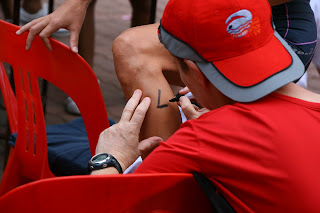 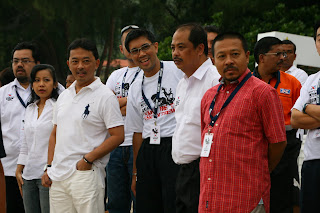 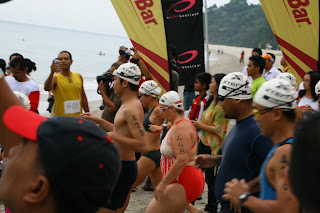 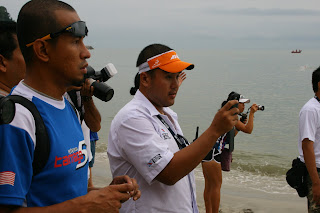 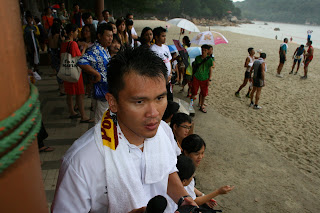 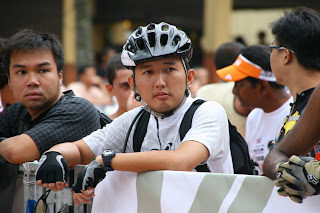 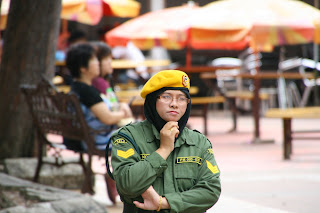 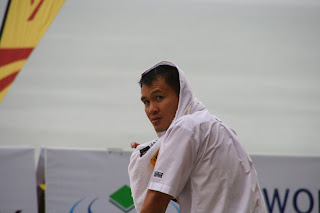 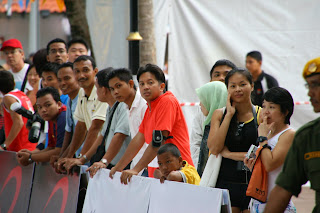 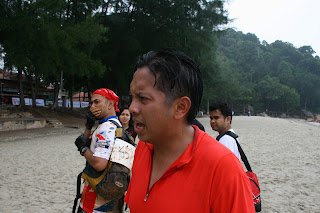 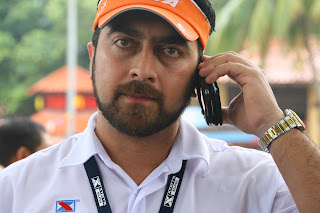 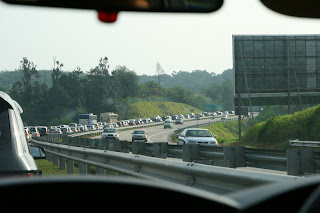 Posted by mafeitz at 12:39 am 3 comments: Links to this post 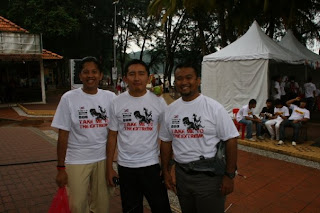 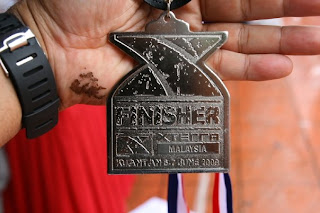 We went to Kuantan.. did something together.. and we finished it ! We are definitely happy to be part of history ; finishing the Xterra Malaysia which was the first ever edition organized in South East Asia !! Alhamdulillah !! 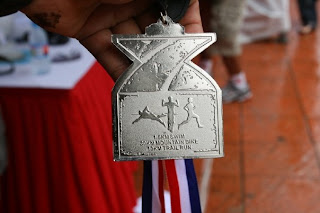 It all started when Kamal ( who seldom call me on the phone ) gave me a ring and enthusiasticly asking whether we can join this race. He is an MTB enthusiast therefore taking part in a rare MTB race in Malaysia is an opportunity he could not afford to miss ! Otherwise , his MTB hobby he developed when he was in UK would go into shambles and the potential will not realized. The only way we could all join this race was being in a group and we were lucky there was a RELAY event !! ( Me n Kamal not much of a swimmer..and swimming 1.5 km ???? )
Getting Azad to join was not difficult as any exciting adrenaline pumping activities is a must for him. He used to be a certified lifeguard and he did the sprint PD triathlon last year ; thus a SWIMMER guranteed !! Kamal obviously was the MTB man and of course me..the runner. None of us are pros but i guess these are our strengths ! 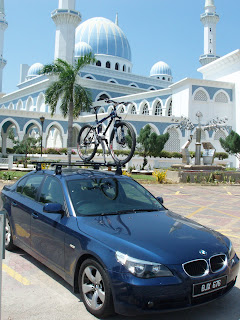 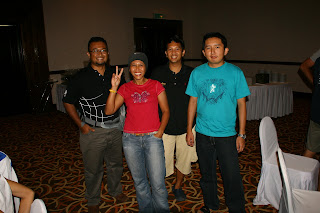 (post briefing with fellow blogger !)
We stayed in Hyatt as we thought that it would be the most convenient place to stay for the race ( besides Azad getting the discounted rate). Driving a bike on top of Kamal's BMW was a real eyesight and grins were everywhere when we passed people on the highway !! hehehehe
When we arrived on a hot Saturday afternoon , everything was in place in Teluk Cempedak and the atmosphere was there! The set up was good and after registration in Vistana we proceeded to check in Kamal's bike at the beach. Wow... memang cool giller.. 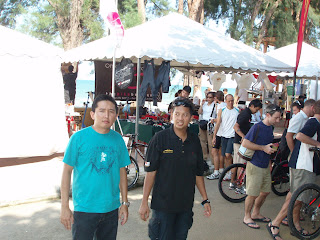 Kamal was so nervous that he could not sleep the whole night ! Azad was snoring away and I was so and so.. Kamal was puking like he was about to be married the whole morning !! hahahaha ( Jgn marah aaa ) We were ready!! GOOO VOLTRON FORCE !!! 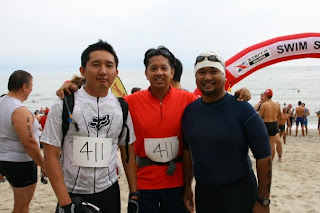 Azad started the race as our swimmer in this swim 1.5km , MTB 30km and train run 10km event. I was initially afraid of his safety and that was why i stayed on the beach to monitor him. I don't want anything bad happen to him however confident I am on his experience. It was scary looking at the whole group swimming across the deep sea. There were few drop outs as they swim and I was stil worried. Azad was cool however.. calmly doing his bit and I was glad when he finished his course !! GO AZAD !! We were not in the driving seat but to survive the 1.5km swim is not an easy fit !! Cayalah bro !! 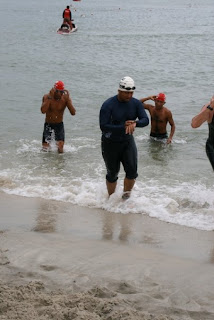 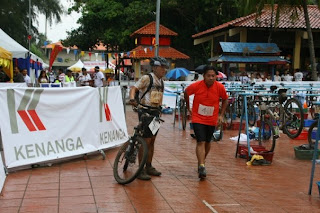 Kamal was next on the bike and he flew off as soon as the baton was passed to him. He was so determined on going on that he did not smile for my camera. hehehehe I waited for another 2 hours plus before it was my turn to run. During this time , the winner from the pro section arrived and wow... that was Xterra winner ! I dunno how this guys do it..but they are damn fit aah... cayalah...
Kamal came back enthusiasticly; he was speeding along the plank and to the transition area.It had started to rain and Kamal was all mud when he got to me. I was glad to see him and was ready to go for my turn! I was a bit cooled down though because it was only at 1130am that my run began ! The trail was fair with its two loops. The climb was ok the first round but I could only manage to walk up on the second ! I was glad that i took my trusty trail shoes ( Axel..rm60!!) which was a bit heavy compared to my running shoes but reliable for climb up and down! This shoe survived genting trailblazer , G. Hitam and Mulu/Pinnacles ; which in every trip I expected it to rip off for me to throw it away! The shoe remained steady all the way and this shoe allowed me to run down the trail confidently to compensate my walk on the way up! Made in Malaysia !!! 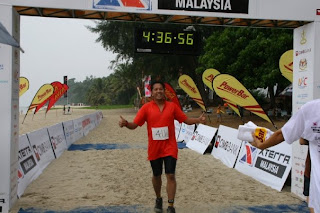 And we survived.. finished it..and happy !! It was worthwhile eventhough it is just a relay event.COngratulations to my fellow Voltrons ; Kamal and Azad who made the trip and experience worthwhile! Kudos to the organizers for a fun event ; you guys rock organizing something international ! Definitely a sign of more good things in the future.. Insya Allah !!
Posted by mafeitz at 9:25 am 5 comments: Links to this post