We were in One Utama early this morning. Wifey initially planned to buy few IT stuff before lunch at Taman Tun. To my surprise , there was an event happening at the new wing lobby. It was a promotional stunt for the incoming KL marathon late June ; a 24 hours threadmill challenge ! I would have planned it with my group of friends if i had known it earlier ! It was the first of its kind in Malaysia and participants are encouraged to join in their bid to be in the Malaysia Book of Records ! 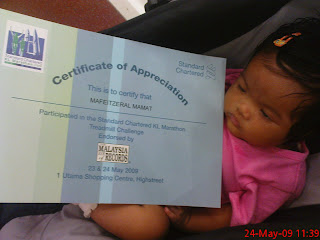 Each participant was required to walk or run ; at a minimum speed of 5km/h ( which is truly walking phase) or run as much or as fast as they can for 5 minutes ! Easy isn't it ? Well , i queued up and had m fair share of a 5 minute run ! And walah... a certificate to prove my participation!! Hahaha not bad ah for an easy going sunday morning ! but 5 minutes was too short as i became a bit carried away while running on the threadmill! 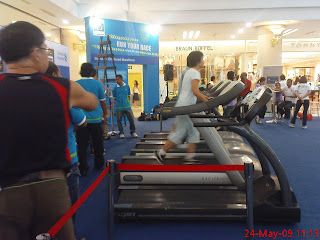 We were supposed to buy a lot of things but it was halted by the typical sibling rivalry scenario ! Wifey thought of renting the small cute mini car stroller will make both the kids happy.. Unfortunately , both Qaisya and Dzaeff fought against each other for a ride ! Wifey thought one of them would settle down to be on the back seat but boy.. was she wrong ! Both of them cried and hackled each other to be in the driving seat ! hahahaha.. She spent most of the time trying to moderate but of course, it runs in the blood. None of them would settle for the second best ! hhahahahaha
P/S Somehow , the Dzaeff vs Qaisya episode reminded me of the MBvsMB tussle in Perak... :) 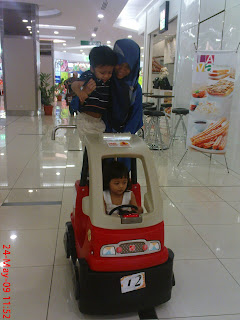 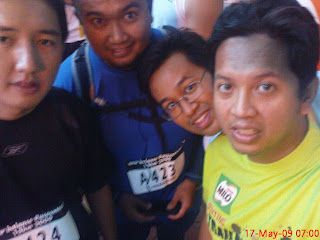 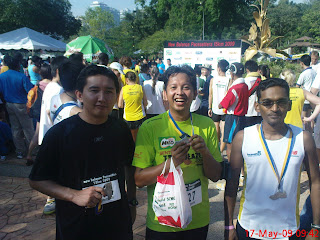 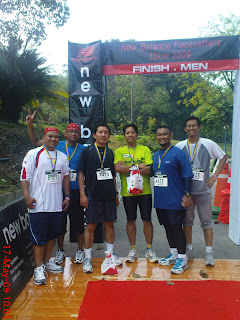 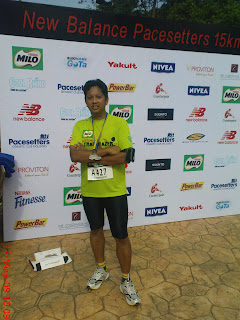 Congrats to the victors ! 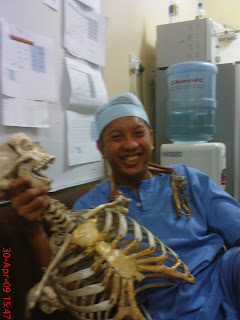 The Masters of Anaesthesia results were out today. Congratulations to my seniors who passed their part 2 and now certified Anaesthesia specialists !!! Tahniah !! Sepcial mention congrats to Shah ( a fellow anaesthetist blogger) as well! Continue blogging bro ; you are a specialist now !! Of course , to my Part 1 colleagues ; congratulations for passing and I know the burden is off !! Alhamdulillah...
And now.. it'll be my driving seat soon. In a year's time it will be my turn and watching them waiting for the results sent shivers to my spine !! Goosebumps all over.. takut seehh... kena start study nih.. hmm.. esok la.. hahahaha

And today.. was the RAMPASAN KUASA DAY !!! Behold and beware..
We are the final years now.. hahahaha
Posted by mafeitz at 10:23 pm 1 comment: 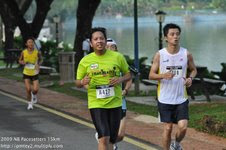 Streamyx was down in BJ during the weekend therefore I was not as swift as before to update my latest activities ! In the midst of wifey's preparation for her viva ; I was busy with the kids but glad that i managed to squeeze in runs in the evening to maintain my runs..
We joined the New Balance 15K on Sunday ; a year after the gang stepped up on our runs. Last year , this run was the first upgrade from 10K. We've never done anything more before and I am glad this year most of the gang stepped up as a preparation for 21K and the full marathon end of June ! 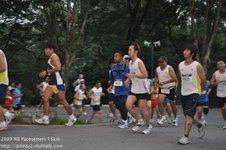 I was happy with my run this time. I didn't really time it but I reckon it was around 1 hr 35 minute"ish", A vast improvement from my sub-2 last year ! I guess the training helped and I was never tired or exhausted. My speed was good and I must say I am very happy. It was a hot race after 8am and there were only 2 water stations.
The route was good but I was prepared with the hilly route ! However , i succumbed to the mental blow when we had to run around the finishing line at the last 1km. MENTAL beb !! hahahahaha ingat dah nak habis ;I should have known better !! Hahahaha
Azad , Kamal , Wan Edrin , RUslan and Halim completed the race in their resepectable times. We have improved !! Kudos.. and I will post more photos when I have the time to upload them..
**********************************************
We were heading home when I heard the announcement by the MC requesting for any doctors around.. I was looking at Kamal and in turn , he looked back at me !! hahahaha Well , I waited if there was any other but then he repeated the call . I then volunteered myself to see what was wrong and apparently there was a lady who was looking ill with the St John's team and they did not know what to do next. I did felt like an important person then as i was escorted to the sick bay area. hehehehe
Nasib baik la I'm an anaesthetist and not eye doctor ke.. ( hahaha no offence !) and I examined her. I had to resort to the basic clinical examination skills because I had nothing else ( no BP cuff set too !! ) .Clinically she was alright , her limbs were cold but her pulse was fairly good. She was too exhausted especially with the weather and fairly stable. I was afraid if she had contracted heat stroke but alhamdulillah , after the oxygen therapy she looked better. Of course , being more than 50 ; a myocardial infarction cannot be ruled out therefore i suggested for them to go to the nearest hospital for an ECG and blood investigations just to confirm.
The moral of the story , doctors will never be out of job.. hahahaha
Posted by mafeitz at 10:07 am 2 comments:

Nowadays its a bit difficult for me to sit down and blog. Our hectic schedule and taking care of the kids had filled our time to the max. Being independent is a challenge and I must "tabik spring" my wife for her superhuman effort. She will be defending her ever dreaded thesis mid May as the last hurdle to pass before she can call herself a qualified Radiologist. Imagine , having 3 kids in the 4.5 years of postgraduate studies is no joke and alhamdulillah she has coped well so far. There were few moments when the bubble burst but somehow the patchwork worked remarkably. I suppose the motivation sped on upon looking the 3 wonderful kids that we have. 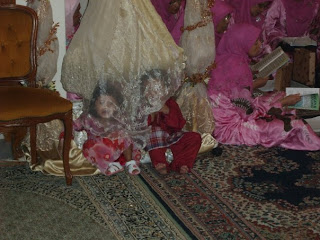 Since moving to BJ , I'm more close to my 2 kids. Wifey is taking 100% care of the youngest so its up to me to handle Dzaeff and Qaisya. I'm a beeter father now ; feeding , playing and putting them under.. ( to sleep lah !) I;ve learnt more about them and i guess they know me better now. They do inherit a lot of my traits eg my eating habits! Both are chocolate lovers and nothing less ; and of course when the food is black in colour regardless the taste , it is not our favourite !! Hahahaha
Dzaeff is not a big problem as he is soft hearted , he won't be disobedient for long as he will succumb in the end. Dzaeff can be sleazy and manipulative at times and that is why we call him the politician.Qaisya is different. She has temperaent and can be really really stubborn at times. That would be wifey's fault because this is definitely her trait !! HAHAHAHA However she can be really sweet at times and i've grown to miss her more nowadays. I must confess I was not keen to have daugthers and preferred sons. Now i know why there's always the daddy's girl tag! Qaisya comes to me when she is unhappy and that make me melt. She would really show her dissatisfaction or negative standings ; she's not afraid of wifey and with me..she knew she cannot mess around.
For all this , I must thank Allah for giving me the happiness that I have now. Alhamdulillah.
Posted by mafeitz at 1:58 pm No comments:

Things i receive on my email..

An invitation from a pissed off mother in law...
Hahahahhaha 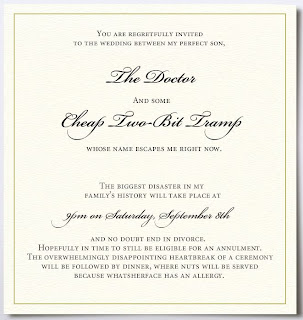 Posted by mafeitz at 1:56 pm No comments:

It was Qystiena's turn this time. Both her elder siblings were celebrated the same way and of course , she should not be treated less ! Mama held her aqiqah & taqniq in Taman Tun this morning. It was an event that she enjoy very much ; inviting both her marhaban groups to recite marhaban and sing nasyid for Qyst. 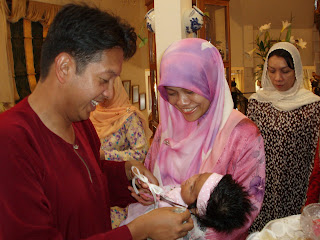 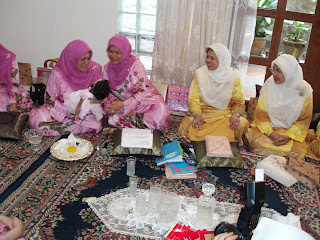 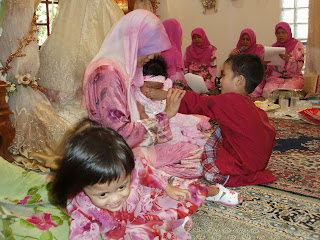 And of course.. the usual antiques of Daeff and Qaisya!! 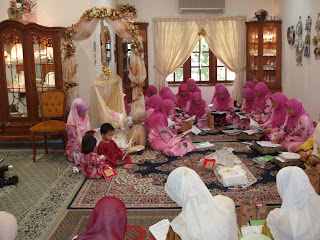 Thank you very much for my friends who turned up for lunch !
Posted by mafeitz at 12:06 am 1 comment:

Email ThisBlogThis!Share to TwitterShare to FacebookShare to Pinterest
Labels: Qystiena 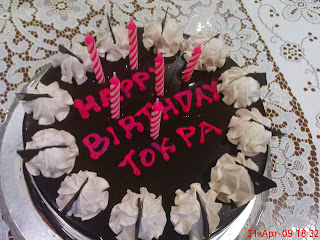 We didn't plan this.. We thought it would be nice to surprise Papa when he gets back home.. Of course , Dzaeff was very enthusiastic about it !! 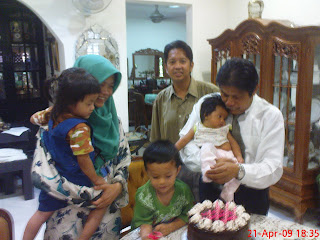