Ramadhan and its power 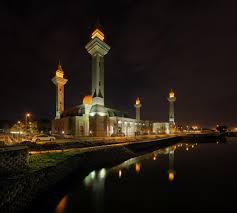 Alhamdulillah, its day 12 of fasting today. A fairly normal routine so far. My ramadhans for the past 4 years has been of multitude situations, from being out of the country to a busy cardiac centre style ramadhan to my revelation adventure last year.
My 3 elder kids are fasting with the surprise package came from Marissa. She is only 6 and she has been doing well to just do it. I remembered Qaisya being non commital to fasting at her age and Marissa is certainly very matured. She doesnt complain a lot and prefers to keep her feelings to herself. Qayyum i hope is slowly maturing. He used to lie on certain days regarding his fasting status.. haha kantoi with umi on the smell of food and drink in his school bag. Its a boys thingy.. and i pray that he learnt from his previous mischievious acts haha
The one thing that i enjoy doing with them this year is to bring them to tarawikh. Alhamdulillah, all of them are enjoying it and i partly put it to the child friendly atmosphere that my mosque provided. Being the 7th royal selangor mosque, it certainly lived up to its reputation. It is certainly comfortable performing prayers here and at night, the mosque shines majestically.
My kids are lucky as during my time, my introduction to tarawikh was by my Pak Long who lived with us at that time. My parents were busy workers and i guess during those days the emphasize on tarawikh during ramadhan was appauling in the cities. Time has changed and the community attitude changed too thus the festival like atmosphere in mosques or musollah all around Malaysia. 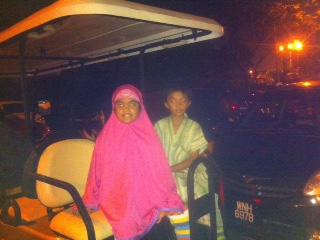 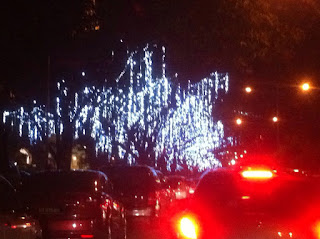 May we all be blessed during this Ramadhan, and the search for Lailatul Qadar is on :)
Posted by mafeitz at 8:26 am No comments: Links to this post

Subhanallah.. a year ago, i was at a different juncture. Masha Allah, only Allah can tell what was felt inside when i made the decision to let go and join the Aman Palestin team in our bid to enter Gaza at that very hostile moment. The war started on the 1st of Ramadhan and the world stood still, a live genocide happening every minute. The attempt of pushing the Palestinian out of their homeland. The whole world continued to let it happen as if it was permissible as the super powers of the world continued to let it happen.
Its easy to preach jihad in sermons and tazkirah but when one is in that position to take up the calling, the decision was not straight forward. To really know the test that Allah gives one after all the nikmat that he has given to you? How willing are you to accept the challenge in your bid to prove your worthness to the Almighty? 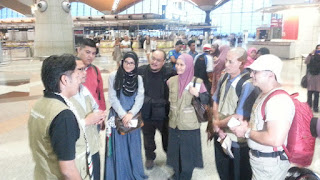 I totally cannot imagine how Prophet Ibrahim A.S. on receiving Allah's command in sacrificing his own son which he had so much wanted after a long wait to conceive, to bringthem to a totally exodus land and after that, to let him go? The ultimate test.. Alhamdulillah, as what was transpired in the quran on the ending of how all things went well. Imagine the turmoil of one own's feeling that defines us as a human being? Of course my own test cannot be compared to what Prophet Ibrahim had to endure, but perhaps only a fraction of what he felt which honestly will still make me teary everytime i think bout it.
It was my life changer.  During this journey, I relearnt about my own faith and the concept of fi sabilillah in its true meaning. When we talk about submission, are we ready to submit.. kalbu, lisan dan perbuatan? How ready are we to know the calling is true and to believe truly to qada and qadar defying logical thinking of man?
Subhanallah, Walhamdulillah, Wala ilahaillallah.. Allahu Akbar! 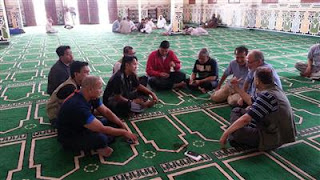 I year on and my life journey has changed tremendously. My views, my opinions and the believe on what Allah has planned for us is different from what i thought of in the past. Indeed, Allah is the planner and the challenge is always on us to keep up to what we preach.
Posted by mafeitz at 10:07 am No comments: Links to this post

Mafiz is an active member of SMTTDI's PIBG. He is not politically inclined therefore his involvement in the PIBG is purely to oversea the school's progress and plan for his children studying there. You want people like this to be a part of PIBG  as they contribute sincerely and not to gain popularity or impressing others in thier CV.
His father was an active member in the past if i can remember correctly. Mafiz has been doing this voluntarily and i reckon he enjoys it. Last year, he brought the students to CTC to be with the CTS team for a day. His creative mind is endless! Truly gifted and talented! 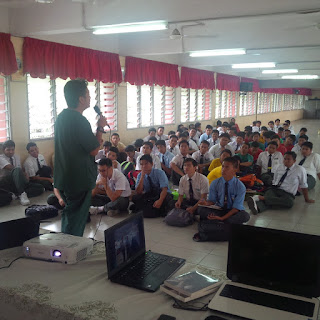 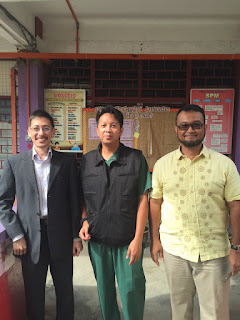 Few days before ramadhan, he brought me and Azad to give a short talk to the form 5 students in conjunction with the school's career week. I was free that day so it was possible for me to do what i enjoy as well. It was a short talk, me and Azad given 20-30 minutes slot each.It was cool to be back in school that we left more than 20 years ago :) It was more of a sharing session rather than motivation and both me and Azad spoke about different themes.
Azad went on to talk about the realities of having a plan and the true proof of what financial freedom is about :)  I went on how to integrate work and passion in the same line. I came in my scrubs as I knew students need to be stimulated visually. especially this current Gen Z. 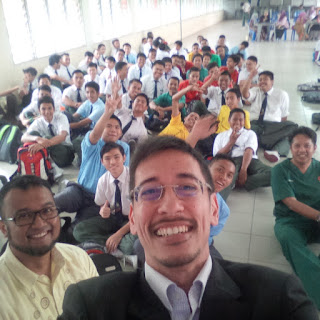 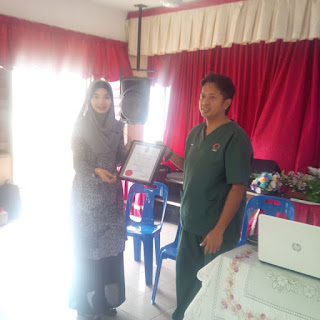 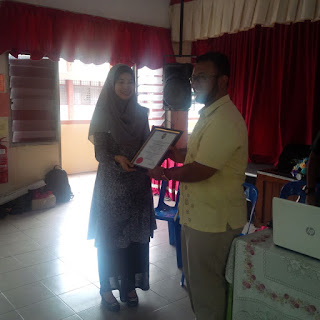 Posted by mafeitz at 9:42 am No comments: Links to this post 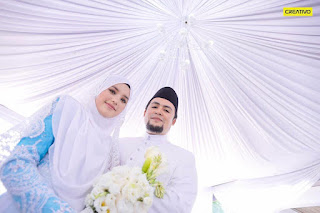 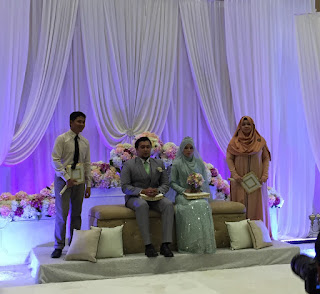 It was their biggest day, Chief Anwar Fazal and his lovely bride, Fatin Liyana or better known in the blogger world as honeykoyuki. Alhamdulillah, It was a celebration for this extended family of mine, team #Diagnosis2 family. I tried my best to make it with the whole family and alhamdulillah, it was such a sight to have all of us there. Ben came with his partner.. ehem..ehem.. perhaps a soon future wedding to attend as well? hehe 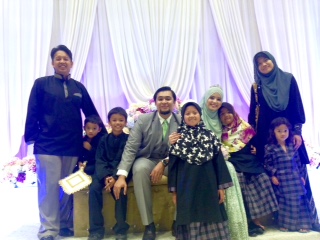 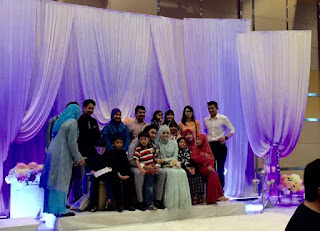 The wedding reception for both families were held in Putrajaya, halfway between both sides guests. MDQs were all too ready to attend events such as this haha I wanted to attend the solemnization in Fl's place but because I was oncall, i could not. It was a bit too far to risk not being called. Alhamdulillah, That Sunday before ramadhan was quiet. 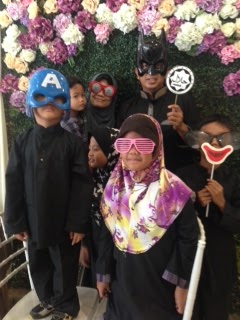 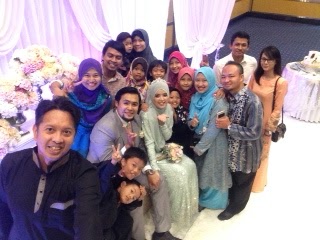 It was also the day we received our first paycheck royalty for Diagnosis2.. hehe Alhamdulillah, rezeki yang Allah bagi :) 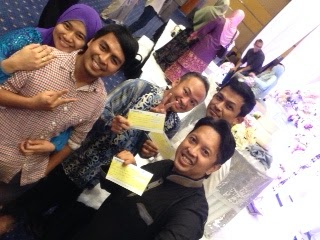 Insha Allah my two colleagues, may Allah bless both of you till Jannah. 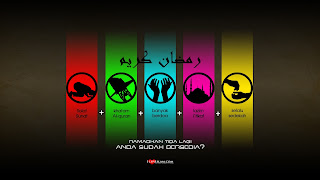 I/ve not updated my blog for the longest time this year! Today is the 6th day of ramadhan and it has been a fulfilling one so far.
May we all be blessed during this holy month Insha Allah.
Posted by mafeitz at 2:31 pm No comments: Links to this post