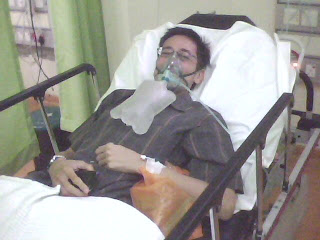 I received an SMS from Mafiz a day earlier. He asked me about his chest pain symptoms. I called him back asking what happened.. and from the explanation, it can be suspicious. However I've known Mafiz for a very long time, thus hisk risk factors for an acute heart attack is very low. So i told him to inform me and go straight for an ECG if it persist.
Apparently, it did. He went to a nearby Hospital and the doctor there thought his ECG was suspicious. Mafiz wants to come to UMMC .. and i said Ok please do. I was doing Neuro list at that time and when he arrived, there was class with TKY. Of course, I chose my friend.. ( hahaha..ni nak amik credit ni..)
Saw his ECG.. thought it was alright. but his symptoms were ral.. radiating pain from neck to the arm.. tak sedap hati.. hadIzwan (A&E boss) to see him. As usual, with his agressive management, he treated Mafiz as unstable angina and took all his blood investigations. I saw Mafiz becoming a bit worried when we wanted to take his blood for TROPONIN T and of course, when Izwan did an echo on him..
looked OK.. tak nampak anything no moving there.. hahaha
Then when the cxray came back.. waaahh.. he had a small pneumothorax ! about 10% .. then everything fell into place.. thin young man , fit and outgoing.. chest pain central in nature exagerated by movement.. pain that can radiate to the arm.. itulah diagnosisnya!!!! 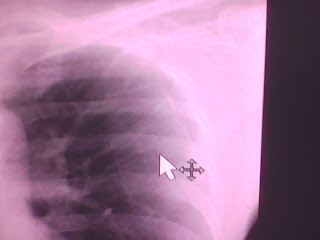 He was admitted for one day.. his lungs expanded on the next chest xray! Yeaaahhh.. however , no more airplane travel and altitude visits for him at the moment :)
p/s I'm sure the ailing bits to breath uncle in front of your bed as well as Darth Vader admission will be something that you can tell tales about!! hahahaha thats my day to day job bro.. :)
Posted by mafeitz at 10:03 pm 1 comment: Links to this post 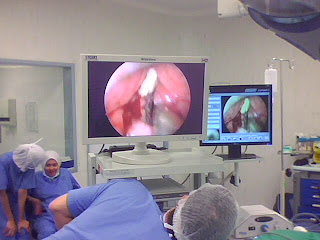 Email ThisBlogThis!Share to TwitterShare to FacebookShare to Pinterest
Labels: exam 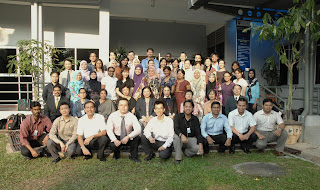 Having my biggest exam in my life in less than 55 days from today is a big stress point in my life at the moment! Kelantan was an eye opener as I am shocked to see where I stand currently. My knowledge is pretty poor compared to others and hey.. I'm aiming to qualify as a specialist come May? Its good that I'm woken up by the Intensive Course but I'm not sure how much can I do to solidify my ability either impress or being slayed alive in front of the examiners!!!
Its a myth to say that Part 2 is easier to pass than Part 1. Its equally hard and I dunno why my predecessors keep telling me that it is a fact? ha..ha.. its not funny anymore! I still have a number of days to go through everything and practice my viva skills.. but hearing who's coming as externals for my exams.. Its gonna be one tough job to con them!!
After all that has happened in my life so far.. I'm reaching where I thought it was not possible 12 years ago. It was during that brink moment where my future was not clear; the direction was sparse..it was a tough journey from hero to zero.. and climbing up after I was floored badly.
but the reality now is I am here .. about 1.5 months away from reaching my goal. The perseverance coming of age.. and I can't afford to let myself down.. I must be it.. and I am..
( motivating myself ni.. hahaha)
God willing insya-allah.. I will prepare my best to be the best :) 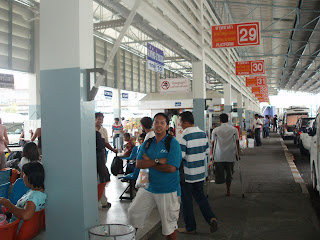 Posted by mafeitz at 6:33 pm 3 comments: Links to this post 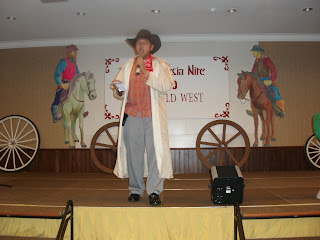 We recently had our Anaesthesia nite dinner with the theme; Wild wild west. I am not involved with the preparations this time as I was in Kota Bharu for 2 weeks. It was indeed something the whole final year batch needed after the stress we had in USM! Realizing the exam is so near with the appauling preparations.. hahahaha ni nak kena buck up in these coming 2 months.
The dinner was held at th Equastrian Club Kiara, the place was modest but the setting done inside the ballroom was excellent! The feel of western theme party was certainly alive..especially almost all came dressed up! 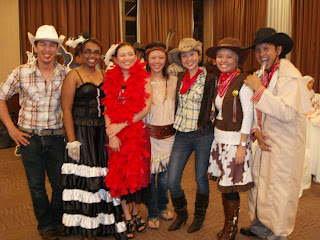 I sang Kenangan Terindah with my slide show on.. hahaha I dunno what made me do that but I guess it was for the last time so takpe la. malukan diri!! hahahaha
And for the 4th year in a row.. I did not manage to win anything for the lucky draw??? How lucky can I be?!
Posted by mafeitz at 6:21 pm No comments: Links to this post