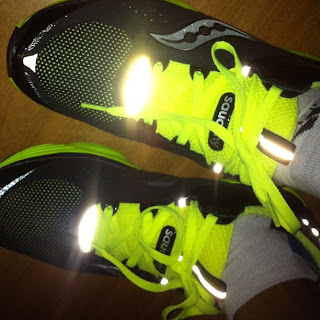 I bought a Saucony GRID PROFILE today - a rare brand to find back home and damn expensive. Of course in harbour town everything was on sale and i thought the price was right for a good running shoes.Just 250g in weight.. cool eih? Initially i wanted to get one of the Adidas or Nike as i thought there offer for Brooks and NB was not as how much I was willing to pay.
I'm planning to run a full marathon Chevron City to Surf in 1 month! Gila sebenarnya considering I've not been training for it at all. However, I've done a bit of fitness with long rides on the bike.I managed to do the HBF and not too bad of its timing too. I hope the cross training would be adequate as I only aim to finish the 42.2km and perhaps just within the qualifying time. Enough la.. Because if i dont do this, then I will regret as this will be my only chance as i will be returning home in February next year. 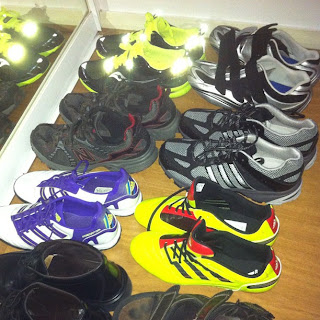 I was watching News Tonight - and the story they covered was really interesting. Its about the Perth Cycling Bug! Apparently, there is a surge of cycling interest for the past 1 year! Perth has caught the bug with people of all ages increasingly getting serious on two wheels around town.One thing for sure, I've been caught by the bug too! :) 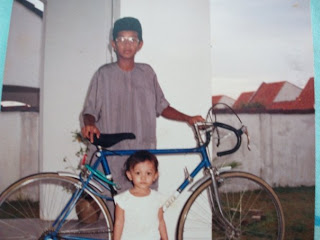 Well, I've always been a keen cyclist but not till I was in secondary school. My parents bought me a bicycle when i was very young , mayb e a bit too keen! Haha If i am not mistaken when I was about 2 ( i however did the same thing with Dzaeffran! haha) Of course, I was never able to ride it until i was very much older. When I was perhaps 7, i remembered trying to do a stunt ( you know, braking and moving your bicycle to your side - BMX style) and i fell into the drain! haha I still have the scar for the cut which required few stitches in the clinic on my chin.
After that, mama bought me a BMX which was not the high end but adequate enough to reckon it was one. Perhaps at that time ET certainly brought BMX craze into light. I was in fact in a pseudo-BMX group with a fella called Abdul Rahman who was our leader. We were not really misfits but we rode together in a group. But bila dah maghrib semua pun cabut balik rumah! haha
Being in secondary school made me more serious with using bicycle as a mode of transportation. All of my friends rode on two wheels, Mafiz, Azad and so did I. Mama bought Pak Pits racing bike and I was off again everyday on my bike! It was certainly the main transport I had to go wherever whenever.It was the in thing for my group till Form 5! But of course, after that we were off on our seperate ways and me to not really ride on a bike anymore. 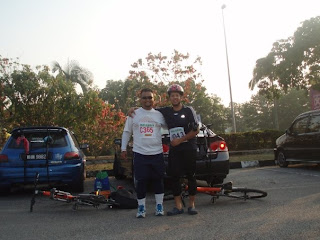 Azad rekindled our cycling interest during the renaissance ( haha if you've been following my blog, you'd notice when there was a surge of running activities after 2007). There was a massive clearance offer for the PROTON mountain bike and I said yes to him! Haha.. but of course, it never really kicked off because I only used it for duathlon. It was a mountain bike and there was no way i could go and do a trail during weekends. I never had the urge to use it and thus, probably once in a blue moon i will be riding it. 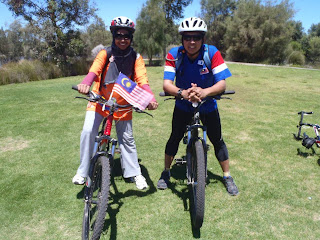 Perth certainly made me fall in love with this sport again. Perhaps the cycling event when DS Najib was in Perth became the catalyst for me. Of course, the department and most of the changing room members were cyclists. And walah.. I bought Meriam (my Schwinn) as my first road bike. It was a revelation because I fell in love with cycling again! Santos 53km ride was a first in a big crowd event. RAC 70km bikehike was another cool event which i will cherish all my live! I did my century with a Rockingham return and indeed doing more mileage nowadays.And as the infection became more serious, I had Mizz Pina to add to the collection! 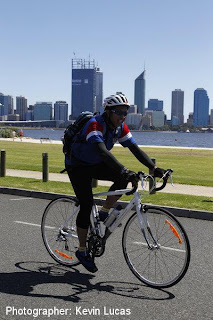 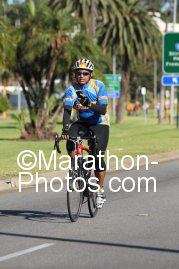 Perth has a vast cycling network paths and to get around is easy , almost effortless! I'm slowly upgrading my bike as I slowly understand the mechanics and the urge of having a much better and lighter machine! I've now known more lingua and an eBay fan to look for good bargains for my biking gear. 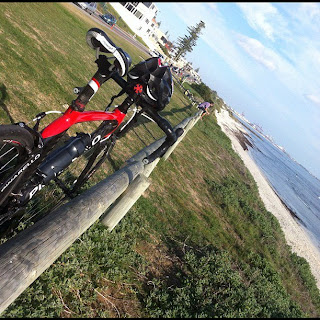 And i have to admit, I too was bitten by this bug.. pure adrenaline rush!
Posted by mafeitz at 7:47 pm No comments:

The unknown history of malays in Western Australia

In the past few weeks, I had the opportunity to mingle around with the malay community in Perth. Most of them had been here for more than 20 years; and their 2nd and 3rd generation calls Australia home. It was interesting to understand their achievement; surviving in a foreign land in the quest of changing their fortune.
And in my discussions of what made them came to Australia, i found out about one part of the malay history I never knew. This topic came up on our conversation in Radio Melayu last week when we discussed about this. Interestingly, there was a big population which resided North of Western Australia- Broome to be the main movers of pearl industry in the early 20th century. Imagine, at one time there was more than 1800 of them! Cool eih.. we were the famous pearl divers in an industry which made Broome boomed then. 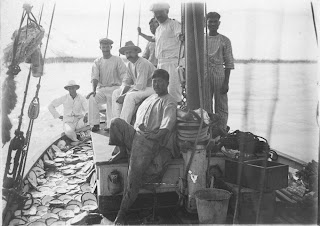 I did my Net search and cool enough there was this page which described the early days - and the malays who were well known for this skill. Malay Pearl Divers 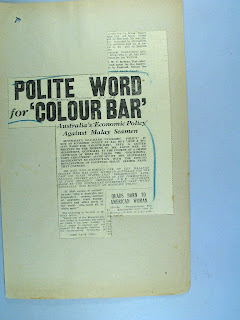 And interestingly, the Malays were in a centre of controversy in the change of policy - White Man Policy then in Australia. It is an interesting read and i am still looking for bits and pieces which i reckon would make a good documentary facts! (If any parties interested to highlight this part of history!)

"In the postwar years, Malays were at the centre of controversies that highlighted difficulties in both the White Australia Policy and the indentured labour system. In 1947, the Chifley government attempted to deport a group of Malay seamen who had been admitted during the war as refugees. The plight of these men, many of whom had married Australian women, won considerable public sympathy." 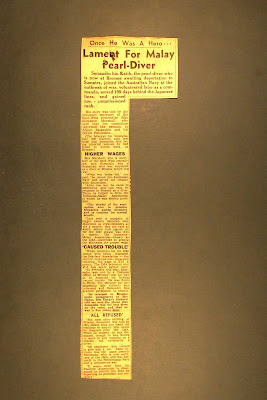 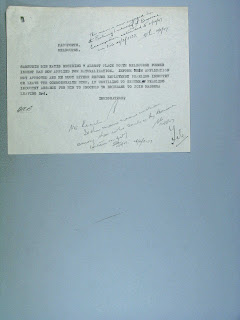 I was lucky to have met a senior chap- who came as a diver in 1963 - but since the 80s had moved and lived in Perth. He still speaks Malay and he is old, Pak Atan.
Insya-Allah, I will try to dig up more about them and their lives, their stories and experience for me to share with all of you.
Posted by mafeitz at 12:18 am 2 comments:

This will be my first entry which is directly related to my work here.I thought the days of terror and excitement is a long gone memory; having many of those in my journey towards qualifying for my specialty. Last weekend was definitely one of the highlights of my career! A definite tale to my students later on in my life :) 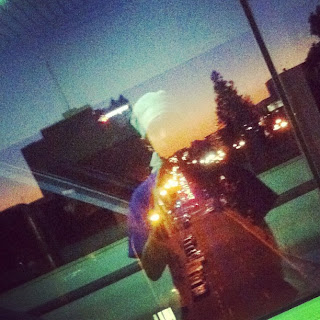 Reza mentioned to me on Friday evening, that blood bank is having problems issuing blood due to their computer system malfunction.Jokingly i told him, its a sign for a torrid weekend as both of us will be on duty. Masin tak masin mulut.. hahaha
Saturday was a busy day as we had a cadaveric donor; thus the theatres were activated for cardiac and lung transplant; followed by renal transplant. Somehow, blood was not an issue on that day as they managed to make it work again.We had a sick laparotomy.. and boy, was she sick. She was compensating well as per induction when our first ABG later showed how severely acidotic she was! She was managed well resuscitated and of course destination ICU. She needed quite a high dose of Noradrenaline.. as she was severely septic.. however it was never as bad as the laparotomies back home!
Sunday was the ultimate killer.. upon my arrival I was summoned ; a heavy duty case of a person who arrested in theatre the week before.A young Liver cirrhosis suferer with all the typical features.We had everything ready;Andreas was the Consultant and Stefan was there as well. the Level 1 infusion pump.He he came to OT with Hb of 5.He bled in the ward and was resuscitated but needed an urgent scope which we decide to do it in OT.
The scope looked not too bad, except there was a big clot just sitting in the oesophagus. No active bleeding was seen and i thought, ok not as bad as i thought. However, as soon as the clot was sucked out.. there was a sudden gush of blood.. RED HOT FRESH BLOOD.. flowing like a broken pipe from the mouth.
As soon as i saw that i shouted to Stefan.. RED BUTTON NOW!! He is not going to do well!!
Blood poured out like hell and the BP which was 90-100 earlier, was coming down rapidly... 70..60..50.. and we pushed in fluids as fast as we can to maintain the volume. Noradrenaline was pushed up sky high..
The Gastro fellas tried to inflate the Sengstaken-Blackmore tube.. but the hole must have been damn big to be sealed by it.He had to be maintained in the almost prone scope position in order to somehow halt the bleeding.We needed a central access and Andreas initially scanned his neck to see the possible vessel. He asked.. you want to have a go? Haha I've never ever done one in this position.. totally unconventional but we needed that access.
I must say this is why ultrasound is so useful as you can visualise it and have a go! Haha.. Alhamdulillah, despite the technical difficulty in the positioning, i managed to insert the swans and yes.. the Level 1 infuser was redirected.
At this point there was nothing that the gastro can do, intervention radiologist was called in to offer their expertise. This was then our next challenge.. His BP was 40-50 systolic and still losing massive blood.. we had to continue this all the way down to the Intervention suite. Haha with my special Adrenaline boluses.. we managed to transport the patient down, along with the Level 1 infusor.. on going as we move! 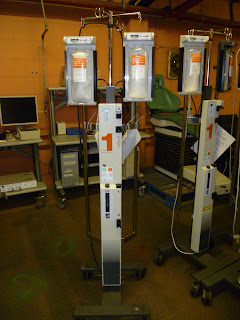 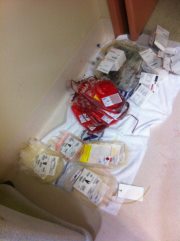 Thank god for Prothrombinex as well, we managed to somehow maintain his coagulation though at this point, it was definitely not his anymore as he was transfused like mad! We had more than 30 units of packed cells given to him and most of it came out anyway! The Senior Radiologist managed to embolize the vessels feeding it out and he slowly had less blood coming out from his mouth.. His inotropic requirement which was over the roof ( imagine.. 80ml/h of Quad strength??) came down dramatically and.. after struglling for 5 hours.. he was ready to be transported to ICU! haha Even the ICU COnsultant was impressed how we managed to maintain him with all that had happened!
It was good team work and I certainly will cherish this unique experience. I guess, the first that did survive the acute ordeal.. back home, Usually we are not able to maintain the circulation that fast for that long because of our resources. Patient would go really anaemic and thus the heart compromised. We somehow managed to transport minimal oxygen required while maintaining the circulating volume.
Peerrghh.. and I was tired.. so tired that today, it was not until noon that i decide to get out of bed :)
Posted by mafeitz at 8:02 pm No comments: