Post call.. tired but an event i cannot miss! The cycling club photoshoot :) 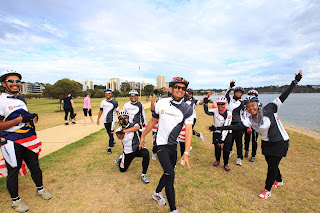 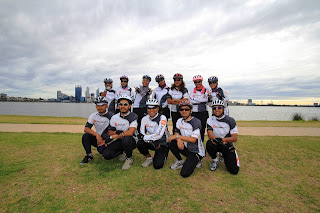 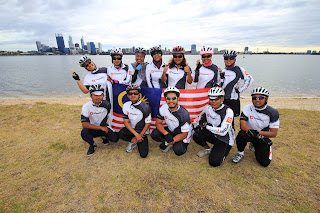 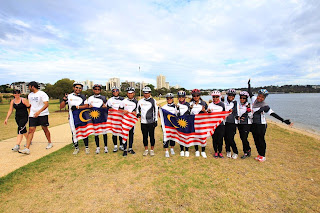 Posted by mafeitz at 4:23 pm No comments: 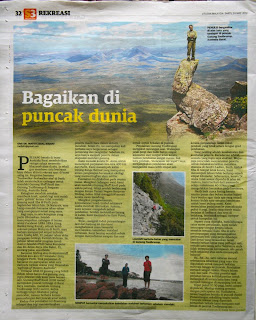 Its not always to have your travel log published in the mainstream newspaper! 24 Mac Utusan - Rekreasi! 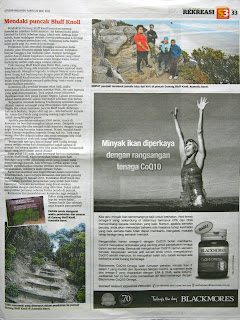 wrote this and sent it to Kak Ana. Thank you for publishing it :) Abadi the "Bagai di puncak dunia" picture on the net:)
Posted by mafeitz at 3:59 pm 1 comment: 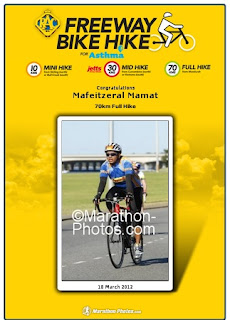 This was the event I was waiting for and luckily Mizz Pina arrived last Friday! Had time to test ride and sort of fix it to my liking and off we go!
RAC Freewaybikehike is a yearly event and boast as the largest cycling event in WA! Again like Santos, this was an event that i cannoy miss being here. I registered early and the 70km did not deter me at all as I've done Rockingham so it should not be that difficult to do this one. 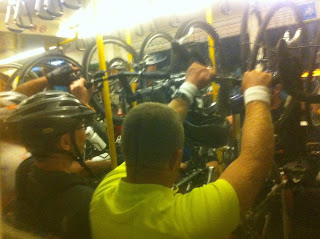 We were lucky as Transperth is one of the sponsors and there was free transport from Perth CBD to Mandurah. Syafiq slept over at my place and we were at the station by 0430. There were a lot of participants and it got both of us excited. While we were waiting, there was an anoouncement asking us cyclist to lift up our bicycles and hold on to the back wheel. Honestly I thought it was for the entre but to my surprise, it was for the convenience of arranging ourselves in the train! Everybody was so disciplined to stack in and I was very impressed! Apparently its a norm during events but of course to both me and Syafiq..gila jakun!
Managed to do Subuh in the car park near to the starting line.. Eh kejap, there is another story while we were on our way from Mandurah station to the starting line! The whole pack took a detour and sesat! hahaha I guess the marshall did not guide us properly tat we wnet of in tangent for about 1km!
I was in the mid pack and we were flagged off at 0640. I guess being more charity based it was not as cool as Santos! I reckon te Santos organizers were keener and more satisfying! 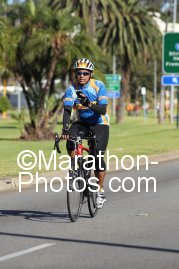 Ride on Mizz Pina was different. It felt really good to push on and I did not have difficulties to maintain my pace. It can be tiring at times but a constant of 30km/h was definitely easy to do. Met other Pinarellos as well and I felt a bit "malu" when they complimented my bike when passing me! haha.. tak tau la saja ke tak pasal when i looked at them it was DOGMA.. lagi mahal siiott...
The route was elevated in the first 30 km along Kwinana but I was not pushed nor did i really push myself. It was good to be able to cycle with strong peletons but I was never overdoing myself as I pace it just nice. This is history in the making as not everybody is privileged to use the highway for cycling!
When Perth CBD was in sight it was so exciting and honestly I can't believe my time then. Wished that I had speedometer to see how fast i was during t ride..Well, tu next accessory! 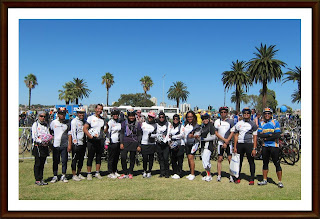 Finished the course in 2hours and 5 minutes! I was so damn surprised woo because my 52km Santos was 2hours and 30 minutes! I must compliment the bike and the machine definitely improved my performance. Of course I am much fitter compared to last October but Mizz Pina was tip top because as far as I can remember, I did not really put any extra effort like my ride on Meriam. 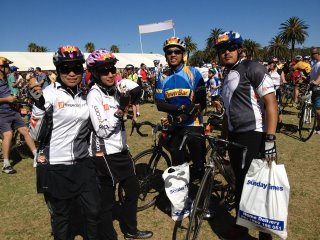 Syafiq arrived a bit later and both of us just enjoyed the carnival atmosphere in Langley's Park. We were waiting for the rest of GEBA gang who joined the 30km ride from Kwinana. Kudos to the whole team for such an encouraging participation! 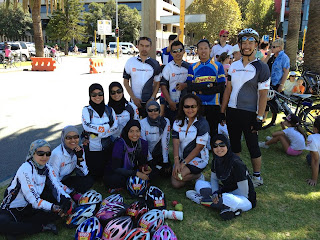 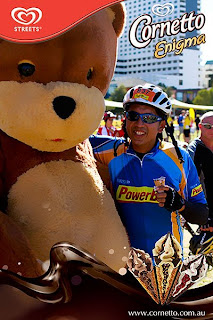 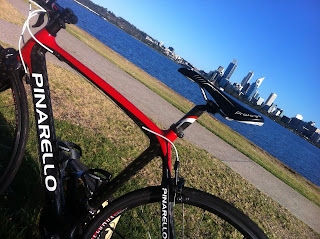 So what do you do when you got hit while cycling?
GET A BETTER BIKE! hahaha 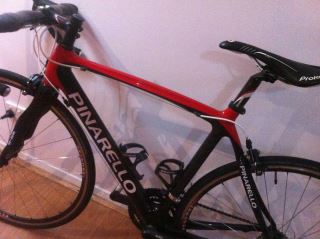 Introducing MADU Meriam.. haha MIZZ PINA...
RAC Bikehike tomorrow.Definitely a good start and a treat for me for being the best in ALS!
Posted by mafeitz at 6:38 pm No comments:

Its never our call

I was in Shenton Park today. A senior nurse who saw me asked..
"Hows your leg?"
Clearly she was referring to my unfortunate incident last week. I was honestly touched by that
gesture.
"Not too bad.. I was lucky.."I said.
"Yeah.. When i saw the news today, I did actually remember you.."
"What news? " I asked.
""The cyclist in Cottosloe earlier.. died after being hit by a car.."

Wooo... goose bumps! Quickly i browsed through my iphone..


Cyclist killed in hit and run at Cottesloe

Yup.. all i can say Alhamdulillah and I guess its not my time yet. but anytime and anywhere it is not impossible.
Posted by mafeitz at 12:04 am No comments:

I was trying really hard to sleep on a hot summer's night (Its heatwave time here).. but then ilham lak datang.. 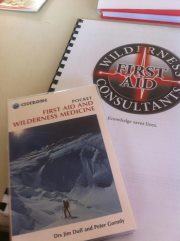 I attended the Advanced Wilderness First Aid Course during the weekend. It was an opportunity not to be missed as its not always that they organize it in WA - most of their courses are east bound. There was in fact one organized back home in 2009 i think, but somehow I was not available for it and the cost was a bit high i think. However, eventhough I am a medical personnel, attending this is a must for me especially with my outdoor activities. Having a bit of training would make me more confident in applying my concepts for the care of the ill in the wilderness.At least, If i am in a situation of medical need , i know the principles of management. It really reminded me a lot of the anaphylactic case of Ahad in Gunung Hitam as well as my shoulder dislocation on trek in Tambuyokon. Wow.. I was lucky on both times. 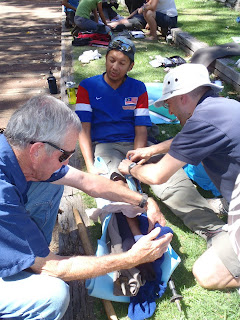 It was held in Mundaring - a nice bush in the Perth outskirt where few trails do exist for the keen outdoor enthusiasts. Munda Biddi trail ( mountain bike track planned till Albany) starts here and about 6km from the centre of the small town is Perth Hills and Mundaring Weir - a historical site for the history of WA.
I was definitely impressed by the variety of participants, from those who are directly involved in the outdoor industry ; having to take this course as a requirement for their licence to the retired academics who takes this for interest. The faculty was also excellent ; having a strong background of paramedics and great outdoor trainers.
The teaching modules were superb and i love their teaching method. A whole lot of simulated scenarios really did enhance our learning - being adults and outdoorish most of our classes were outdoors anyway. I had fun with my colleagues in few of the activities and everybody were keen to participate and contribute. The working model is really good that I've got an idea to have this as an elective for my students. 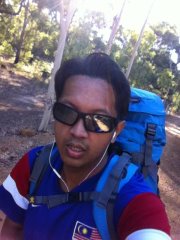 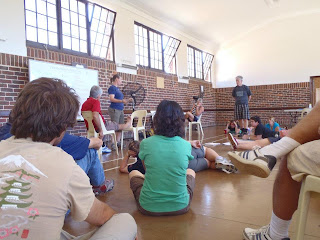 Meeting people from the industry really opened up my knowledge on the Aussie outdoors and beyond. To discover a lot of opportunities is another thing where the suggestions were simply superb. It definitely had made me thought of what I may want to achieve as it seems possible and in line with my qualification and job. 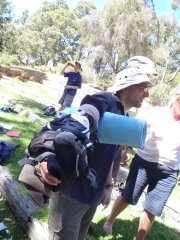