Its that time of the year again! My favourite bit of the year! Honestly, i don't think anybody understands what i do with my SHOES during the past but it will always be my baby. SHOES had the best reviews in every programme and i will do my best to maintain it. However, it can be overwhelming with the increasing number of candidates in MBBS 220/222.
This year though was a bit different, I was recommended by Ikhsan to take over the coordinator post. Yup..being in charge of Shadow HO. At first, i did thought of not accepting it bacuase of the things i was doing at the time when i received the call from Prof Hamim.( Innovateur , ANZCA meeting, SIGRA etc) However, I still accepted it knowing having to juggle everything atthe same time.
I can be very idealistic, where with the role of coordinator i wanted to change everything! haha It was not realistic however given the short time and my other commitments. After a short discussion with my comrades in arms Izzat, i thought otherwise. Maybe what i should concentrate on is th core objective. I believe slowly it is going tangential and the new doctors may find it as a waste of time. That is my challenge this year; to solidify KY's initial idea and aspirations with this programme.
Being coordinator puts me in a different role; the engagement of my trainees became a core part of the whole deal. What better if not to train my future staff on the philosophy and handling of this programme. I am sure , the earliest test to see whether it was the right decision to choose them will be this task. In a way, i am lucky to have bright and intelligent trainees who understood what needs to be done.
There were few topics i slashed off because i thought it was too boring.Bringing in practical topics was my intention and by having Muiz in it would make things interesting.
I had to change the approach of SHOES. METI is not well this time though. hmmm.. it was a bit of a bummer but a change of idea was the way to go. I had to change it to CRM- Crisis Resource Management focussing more on communications in HO situations.
I had to give the grads more focus. The best way i suppose was to get output from them. Make their last day, the day they will remember. The day i wished i had during my last day in med school. Therefore, had them to do a video project.. 4 groups 4 videos. Honestly, i don't know what to expect of them and the quality of their product. It can be either extremities but i guess there must be a first time. At least, if they are not too engrossed to go to the ward, i get them to think of a project getting people together. This will test their non technical soft skills to organize.. Well, HO is about knowing what to do in order with others rather than what was learnt during medical school.
These changes can be a bit revolutionary because of the labour intensivity. But lets give it a go i thought, the easiet way was just to autorun it and whatever lah the outcome. However, this was and will never be my style. I wanna make what is associated with me something to be remembered.
How it turned out.. next blog posting.. too tired tonight to continue...

The meaning of work and life balance

It is difficult to define this.. the meaning of work and life balance. Its an easy concept but in reality brings a lot of different understandings and perceptions. What matters can vary from one individual to another. It has to do a lot with one's upbringing, one's expectations and one's own need in life.I have come across this juncture numerous times in my lifetime, and till now i really don't have the answer.
The answer lies perhaps on the individual, on what do they really want. Problems will appear when one shares life with another or maybe few others. Having to balance one's expectations with another can be really tricky. It is not easy i can tell you that.Certain beliefs and values can be totally nonsense to another party. How do you moderate that? Of course it is about give and take, but to those with no insight.. how do you deal with it? How do you tip toe between what you think is balance and accept the values which can be contradictory totally?
Hypothetical and i'm sure there will never be a correct answer. Then again, life is not about getting the right answer or follow the right way.Instead its the joy during the journey.Its the experience of accepting imperfections along the way.Not many can understand that. Not many can ever accept that.

I attended the graduation dinner again this year with a glimpse of last years that I attended. Though I am totally involved with their final exams (unlike my colleagues) i can still feel the connection. Besides that I am sure, the involvement or participation of the teaching staff in student's activities will be much appreciated. I know during my time, it would be simply wonderful to have our lecturers attending our functions.
Unfortunately somehow this year, the staff members who attended the dinner was far shy from last year's event. There can be many reasons but i reckon if there is nothing at bay, this is one event that the staff should support. 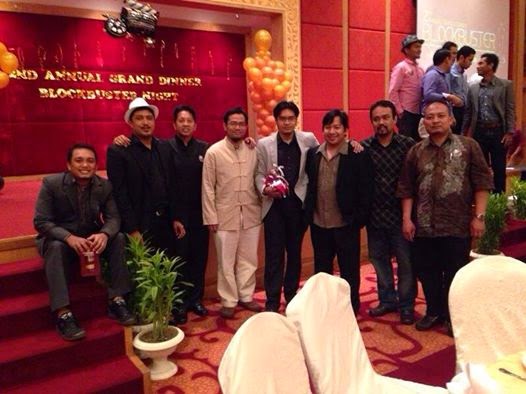 Of course, the group of us attended the dinner; coincidentally the active futsal members of the lecturer's legion.It was a good night out and we thoroughly enjoyed the dinner. Syazli won the smart lecturer's award and I went up to receive the special award for our FORMER Surgical cluster head which i thought was a bit funny myself!haha
MBBS 220 Class of 2014.. Congratulations and All the best in your future endevour! I may not be involved too much during your academic year but definitely in your last days in UiTM.. :)
Posted by mafeitz at 5:23 pm No comments: 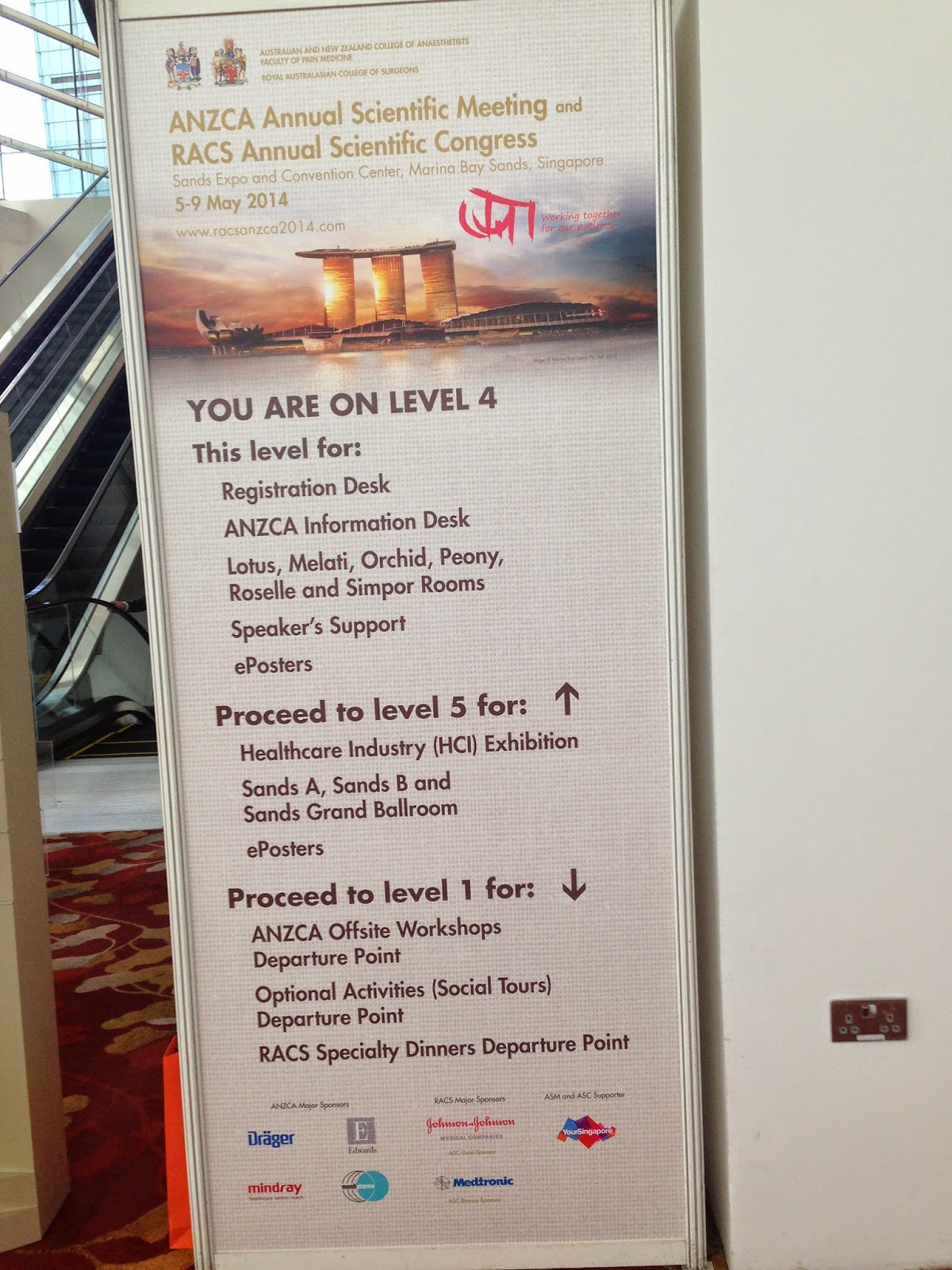 It was a proud moment for SIGRA when we were invited to be part of the pre congress faculty in the regional anaesthesia workshop. The opportunity was important for SIGRA to show how we are recognised in terms of teaching and sharing the knowledge of RA. 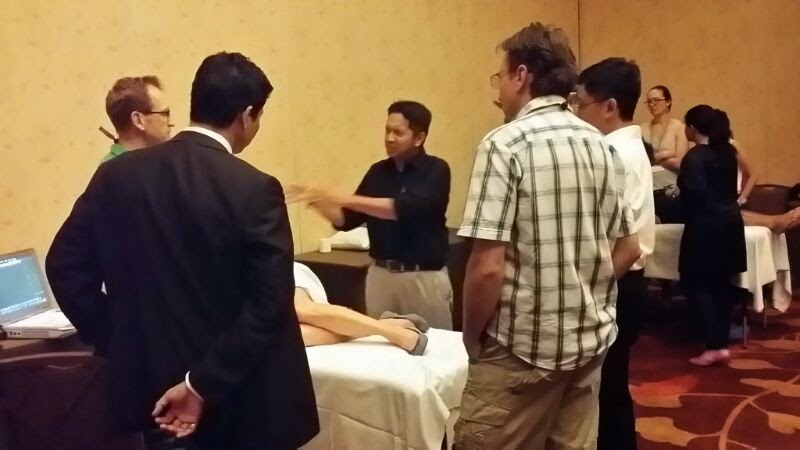 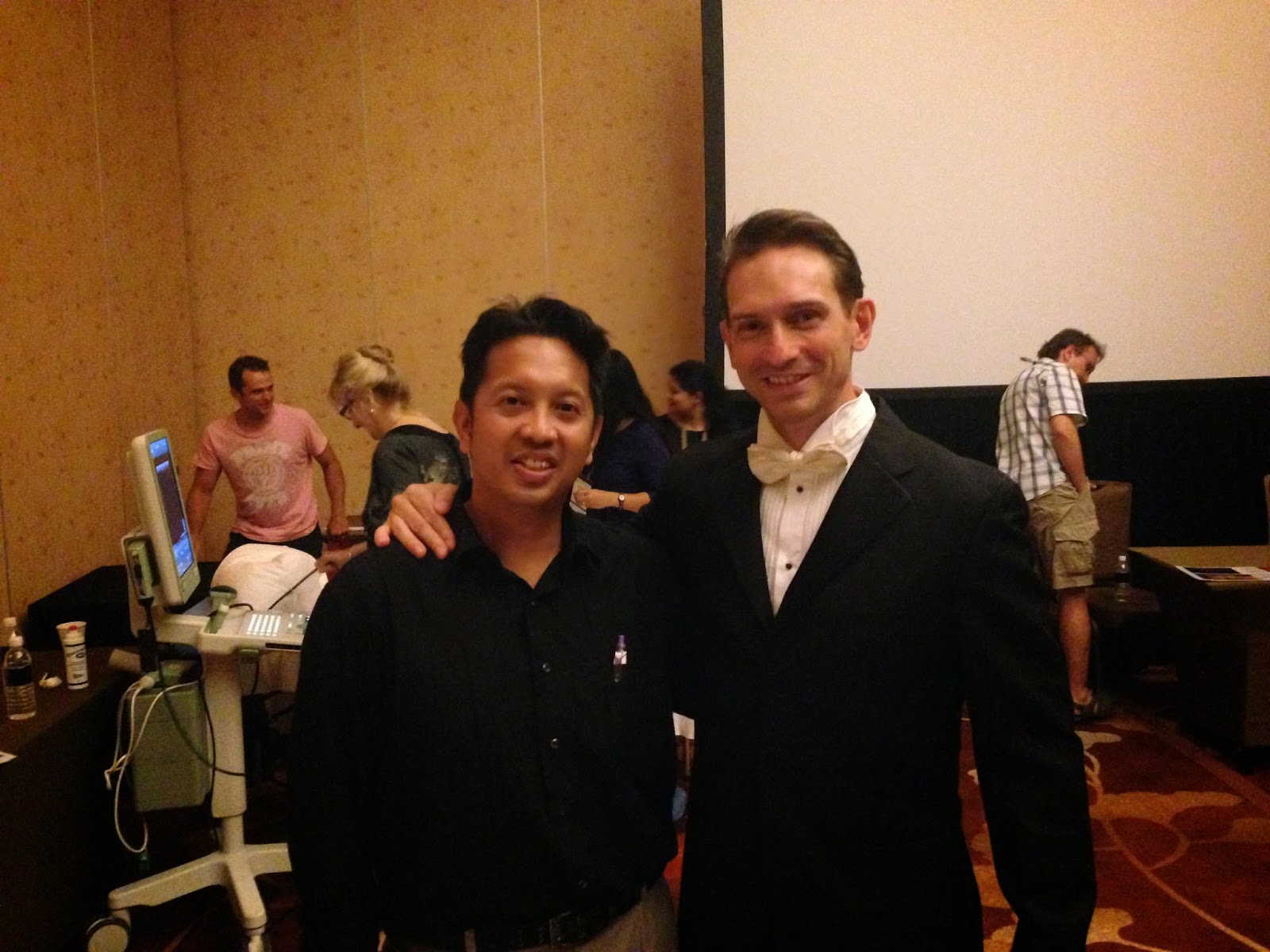 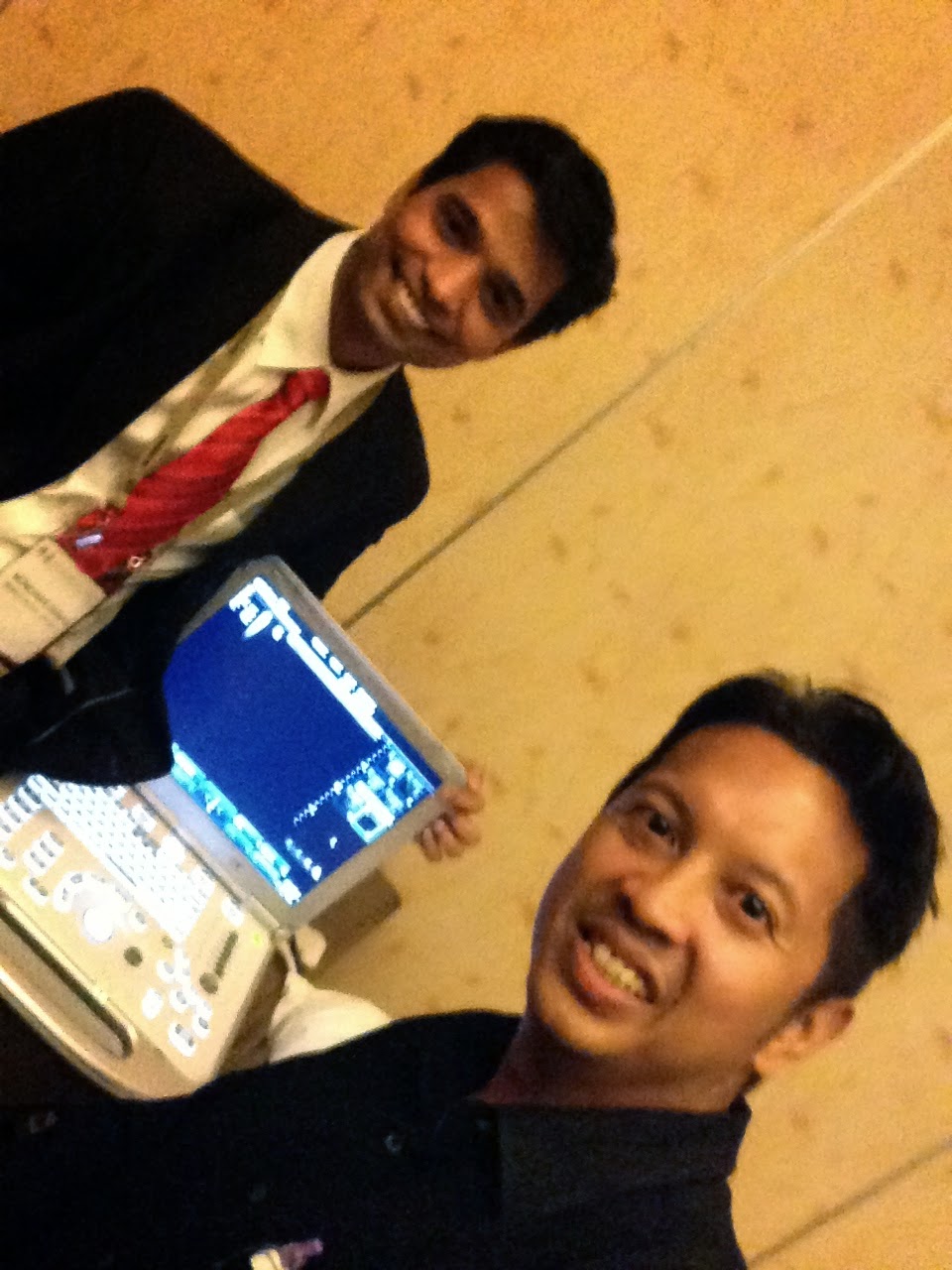 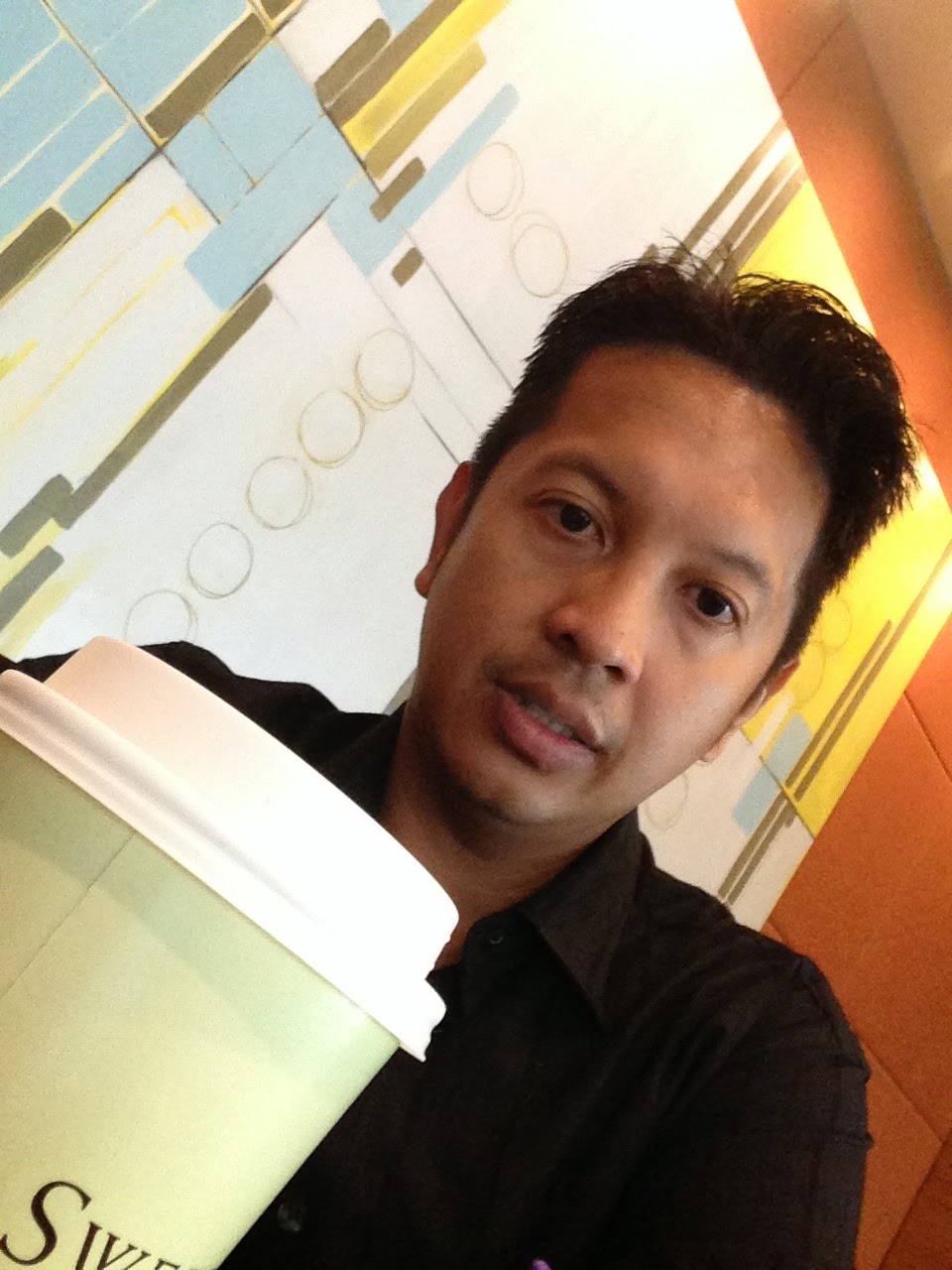 It was a crazy outing because the whole group came for the workshop only (haha kemut ANZCA ni). All were busy and we were just too busy to hang around in Singapore. Most of us flew in and flew out later during the day. it was tiring but fulfiling and i certainly enjoyed the exposure!
Posted by mafeitz at 7:51 pm No comments:

It was a historical moment for us. historical moment for the faculty. Being a newbie in this long tradition of Iidex for the UiTM. Somehow throughout the years under KY, this was never a consideration or perhaps.. we were looking specific in our fraternity ; forgetting what resources and chances are available around us.Creating the video for the competition was one thing, having to pitch in front of the judges and the crowd was another. Who would have thought, the humble us RHAPID999 from Faculty of Medicine would be up there to play our game? 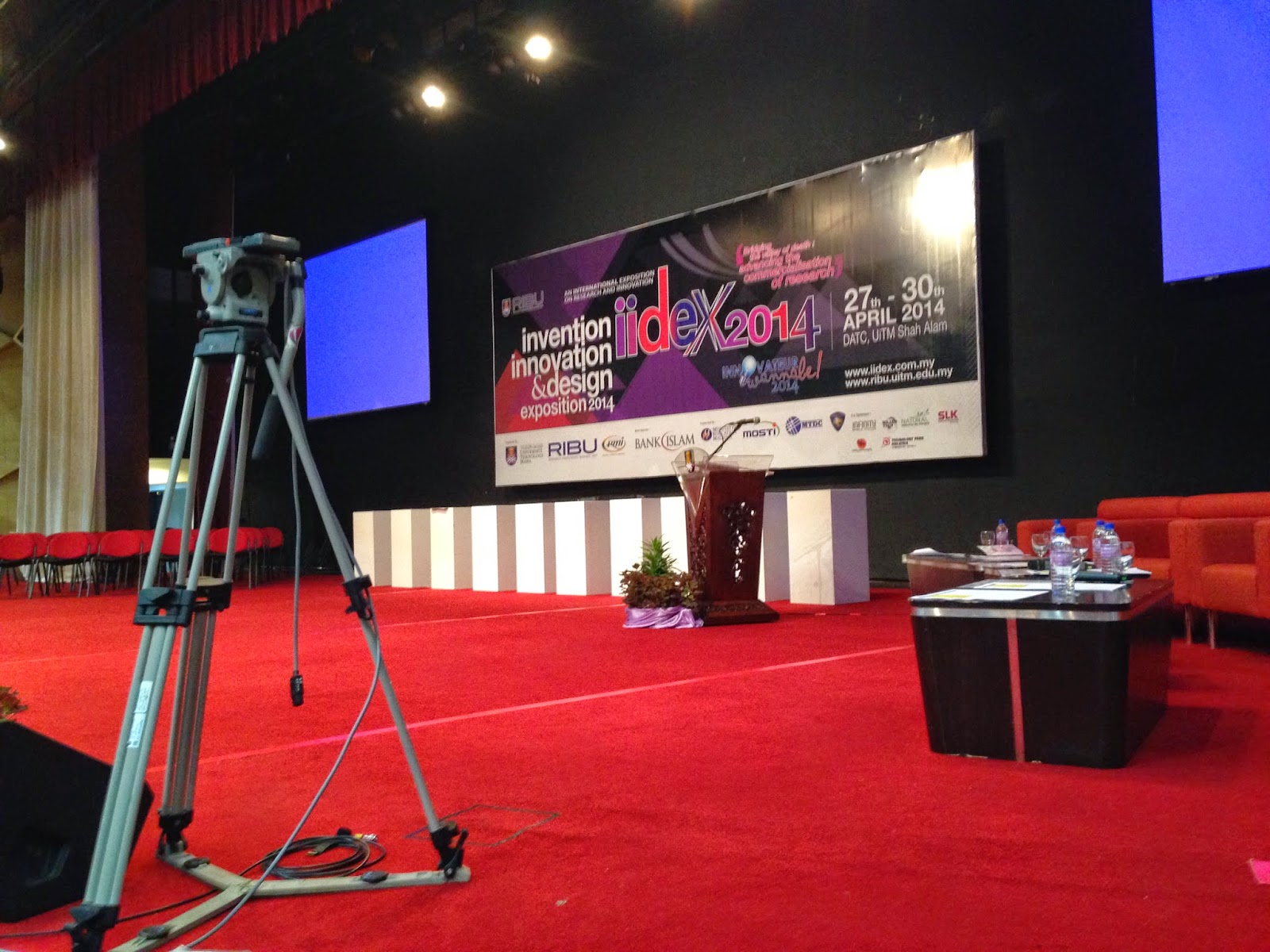 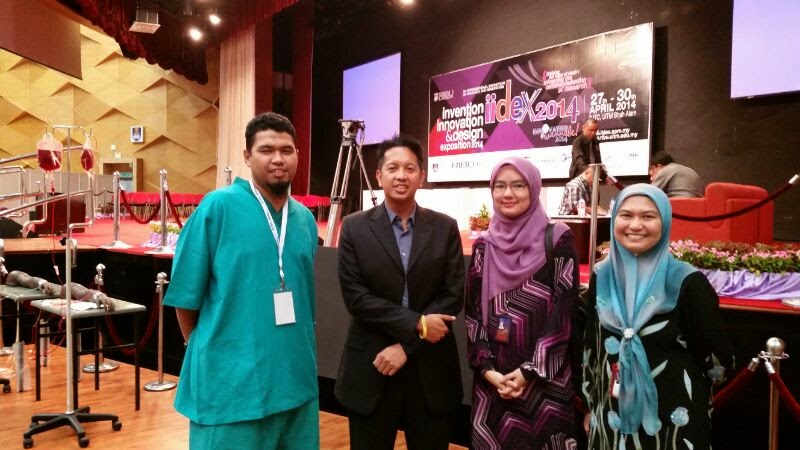 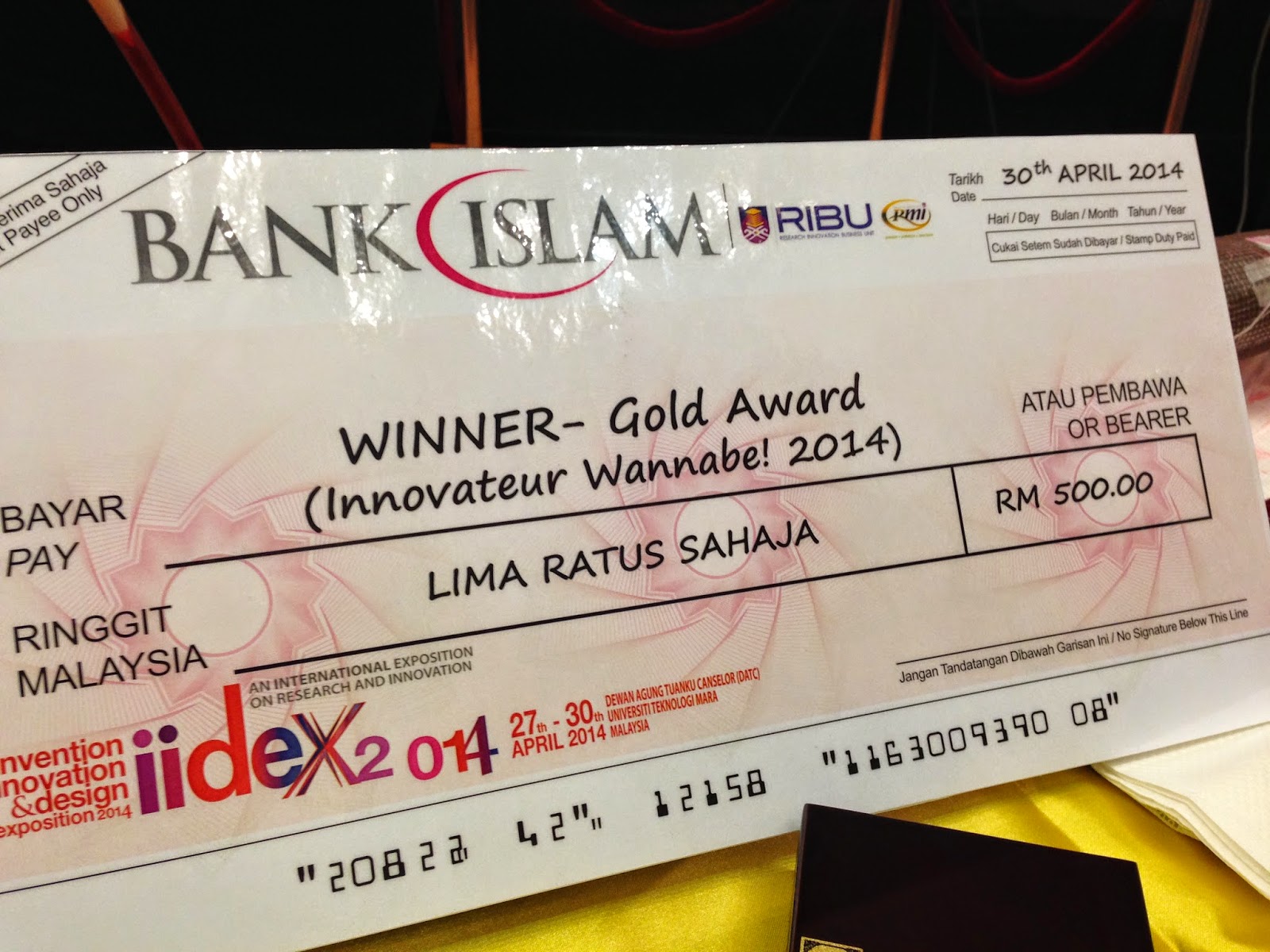 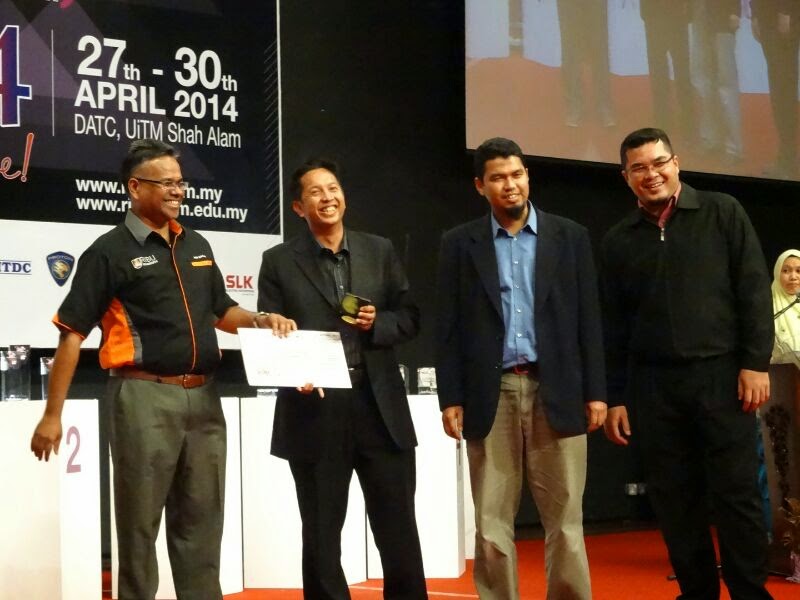 It was a proud moment, not just to win it but the chance to present on the main stage of DATC - the main hall of UiTM Shah Alam, the main hall for Convocation!Had my jitters but doing something that i like, there was never a time i doubt myself being able to perform on that stage that day! 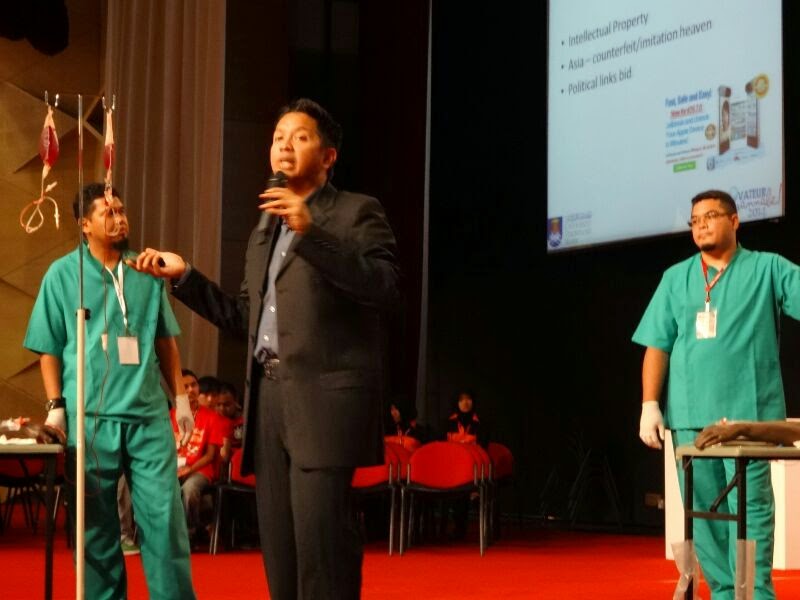 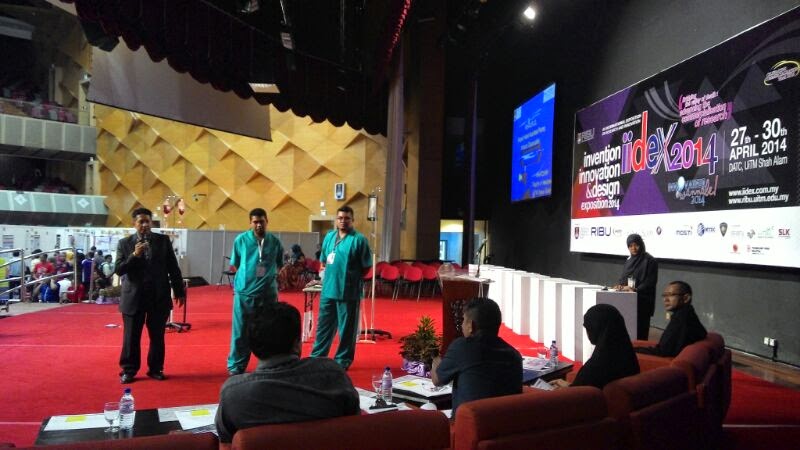 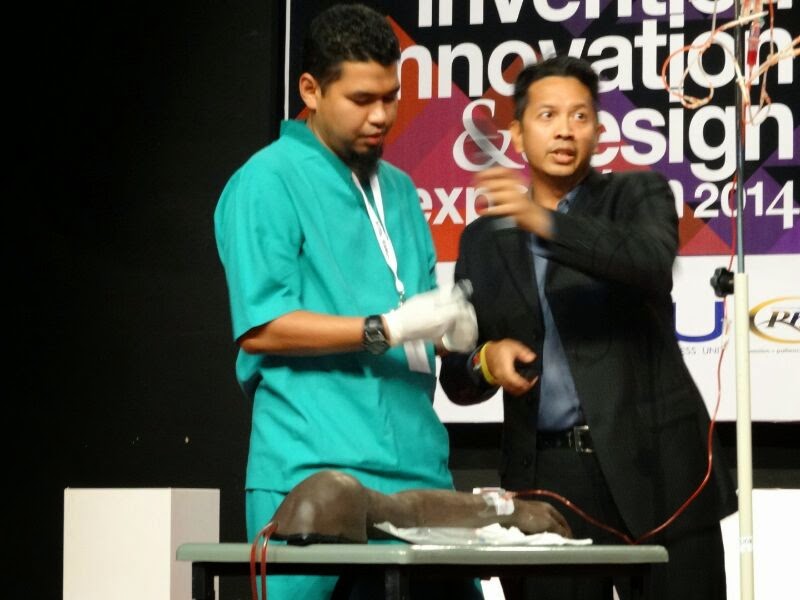 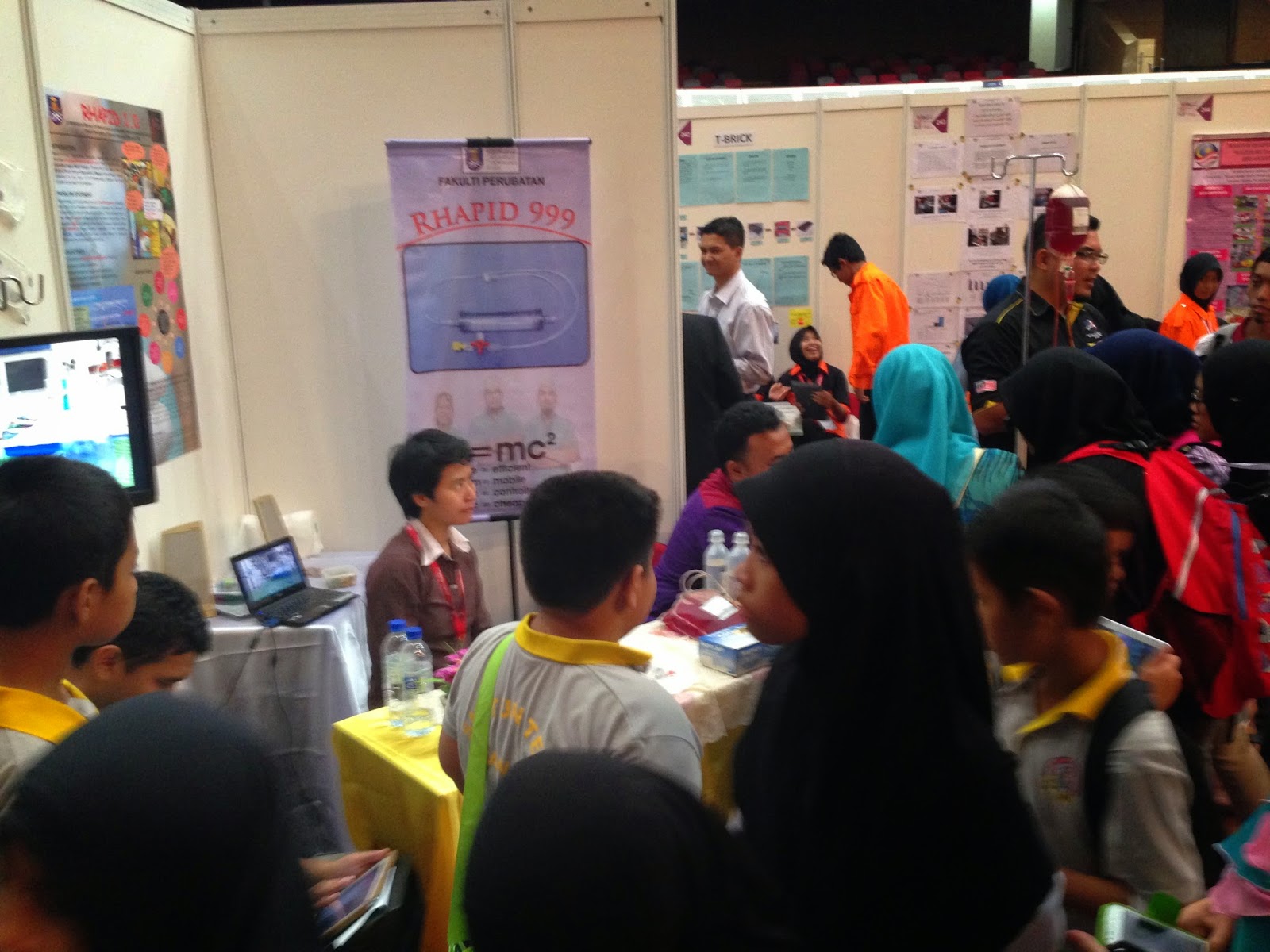 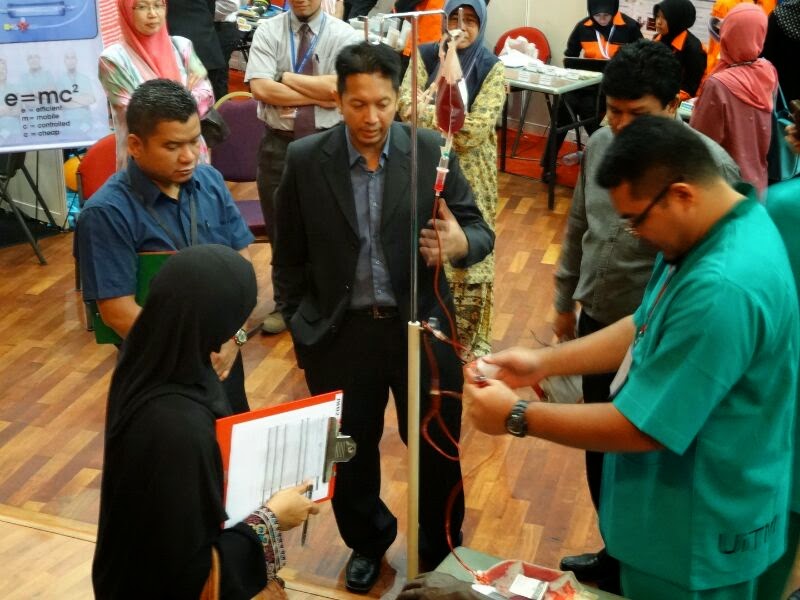 Kudos to my team members, Azman and Hambali. Of course to my staff and those who supported us during the course of exhibition. Certainly, an achievement for me this year and an inspiration to my future colleagues and juniors ;)
Posted by mafeitz at 7:39 pm No comments:

Regional Anaesthesia- MSIGRA in its prime 2014

2014 is certainly the year for SIGRA. ( Special Interest Group in Regional Anaesthesia) . We have certainly made our mark regionally if not nationally. This year the MSA as well as Anaesthesia KKM noticed our presence and now the push for Regional Anaesthesia for subspecialty! Alhamdulillah..
I am proud to be part of the pioneer group to champion this in Malaysia. It is with this i had my opportunity to travel as well as being part of the growing fraternity of regional anaesthesia. There is still a long way to go but the path is now clearer. My tribute to my Sifu (Ling) and the rest of SIGRA members. You guys rock and Insya Allah we can only be better! 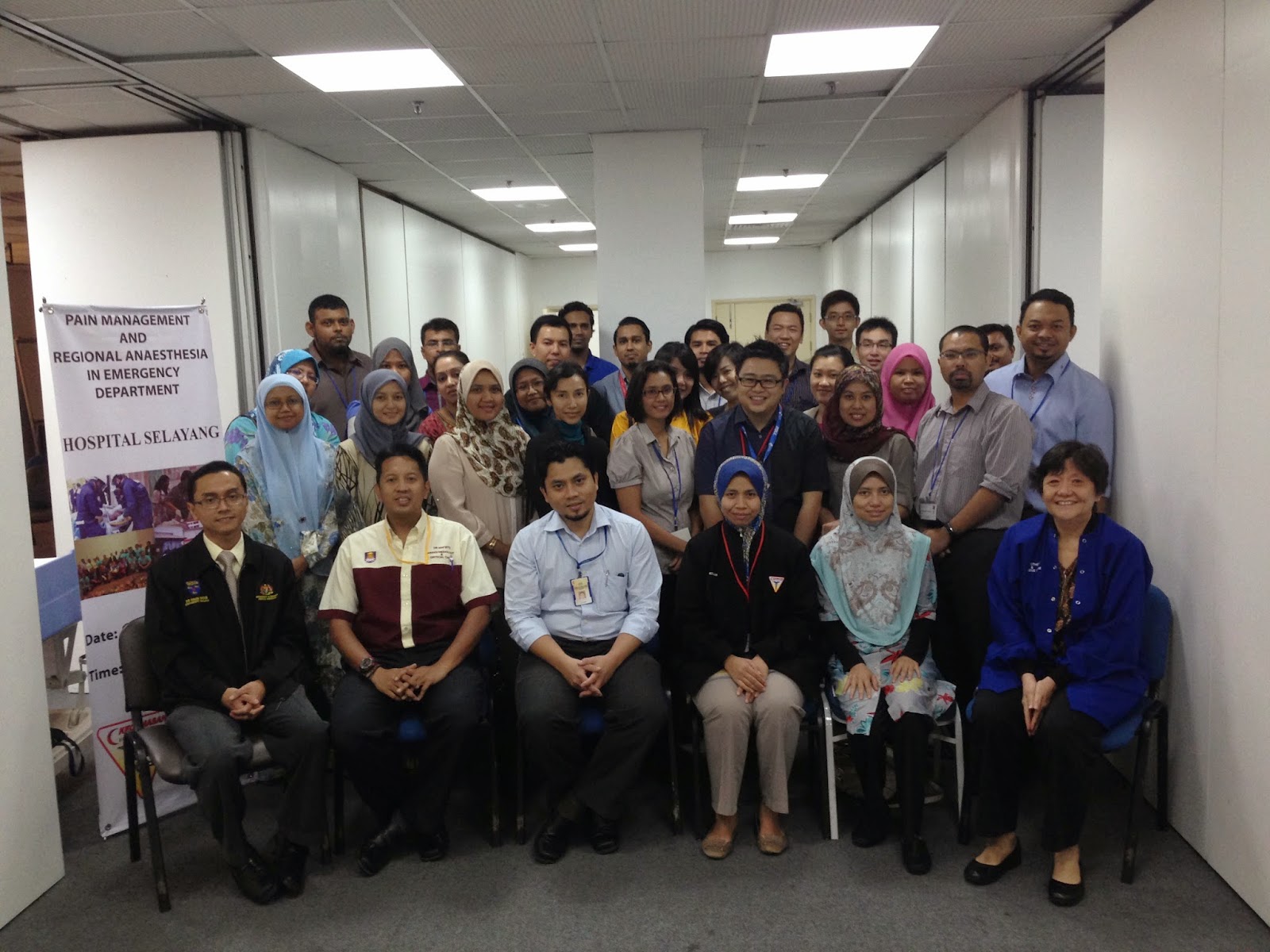 RA with ED in Selayang 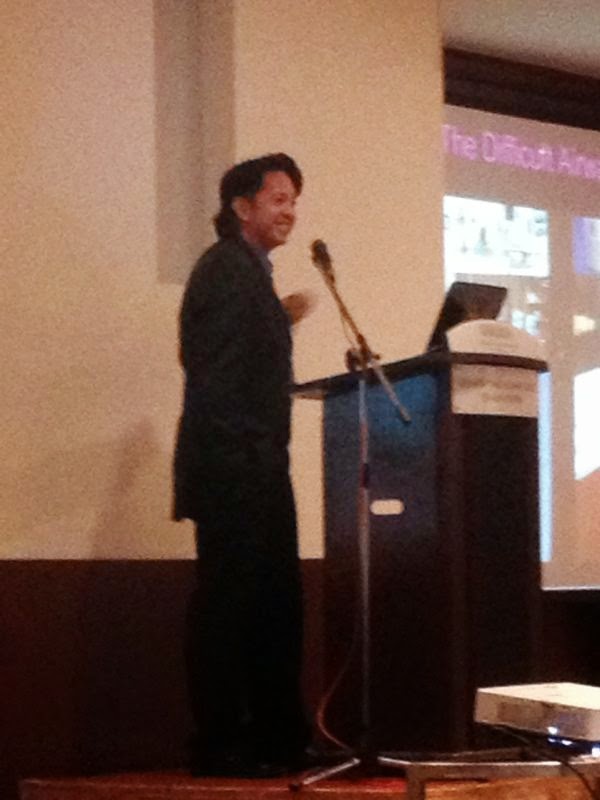 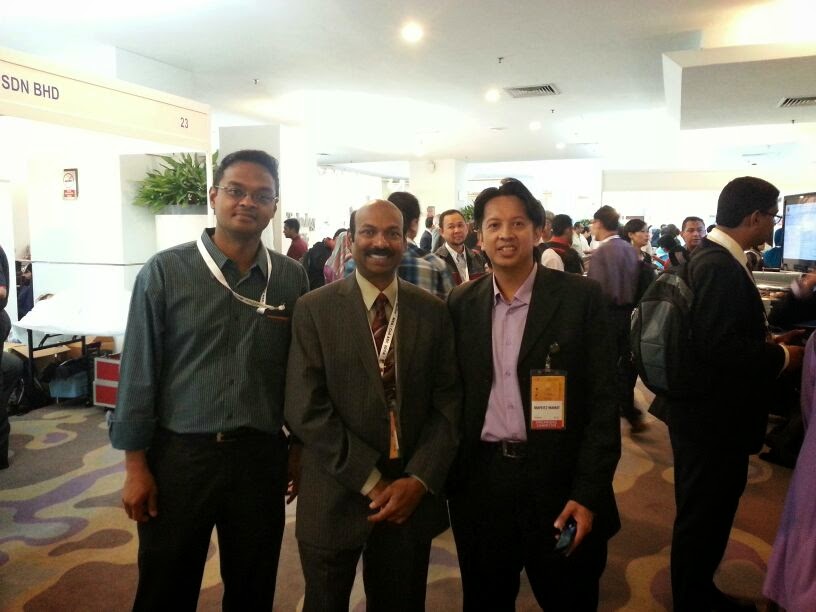 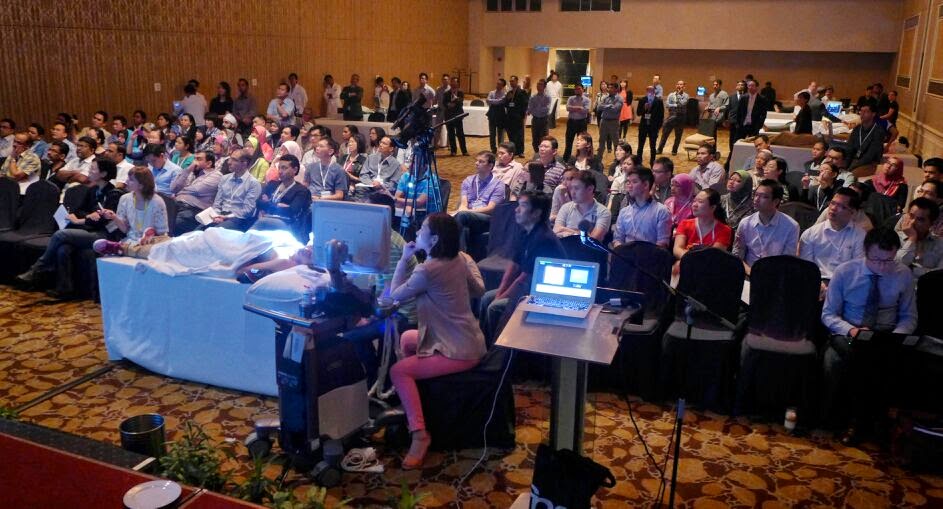 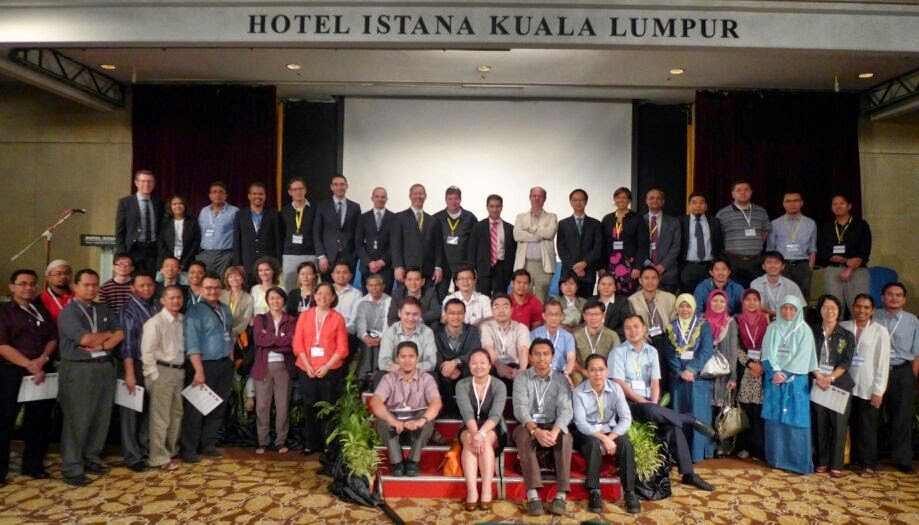 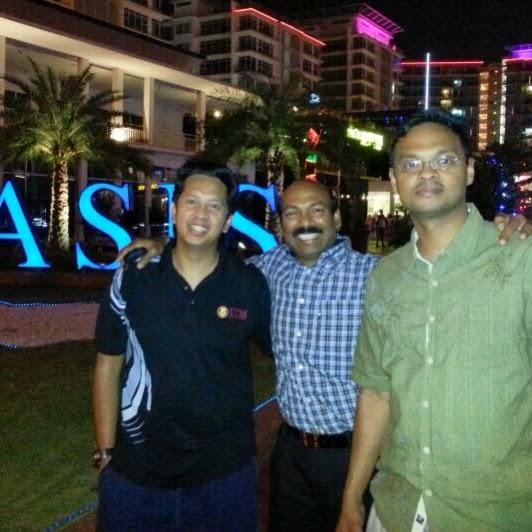 Posted by mafeitz at 7:24 pm No comments:

It was nice to have had a projectto work on.. and joining a competition as a team together with your colleagues. It was certainly an experience of a lifetime. 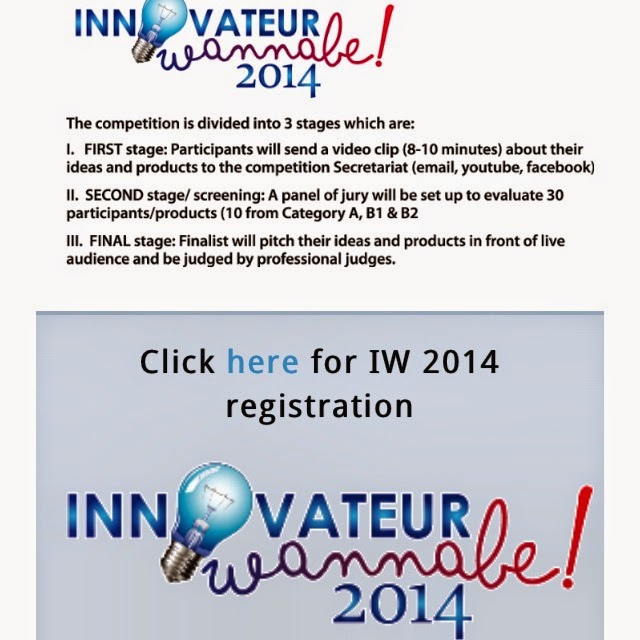 I guess why i joined the competition was because of the video making.. it was a fun thing i loved to do during my younger days. It is a hobby which i had long before the youtube and internet era. 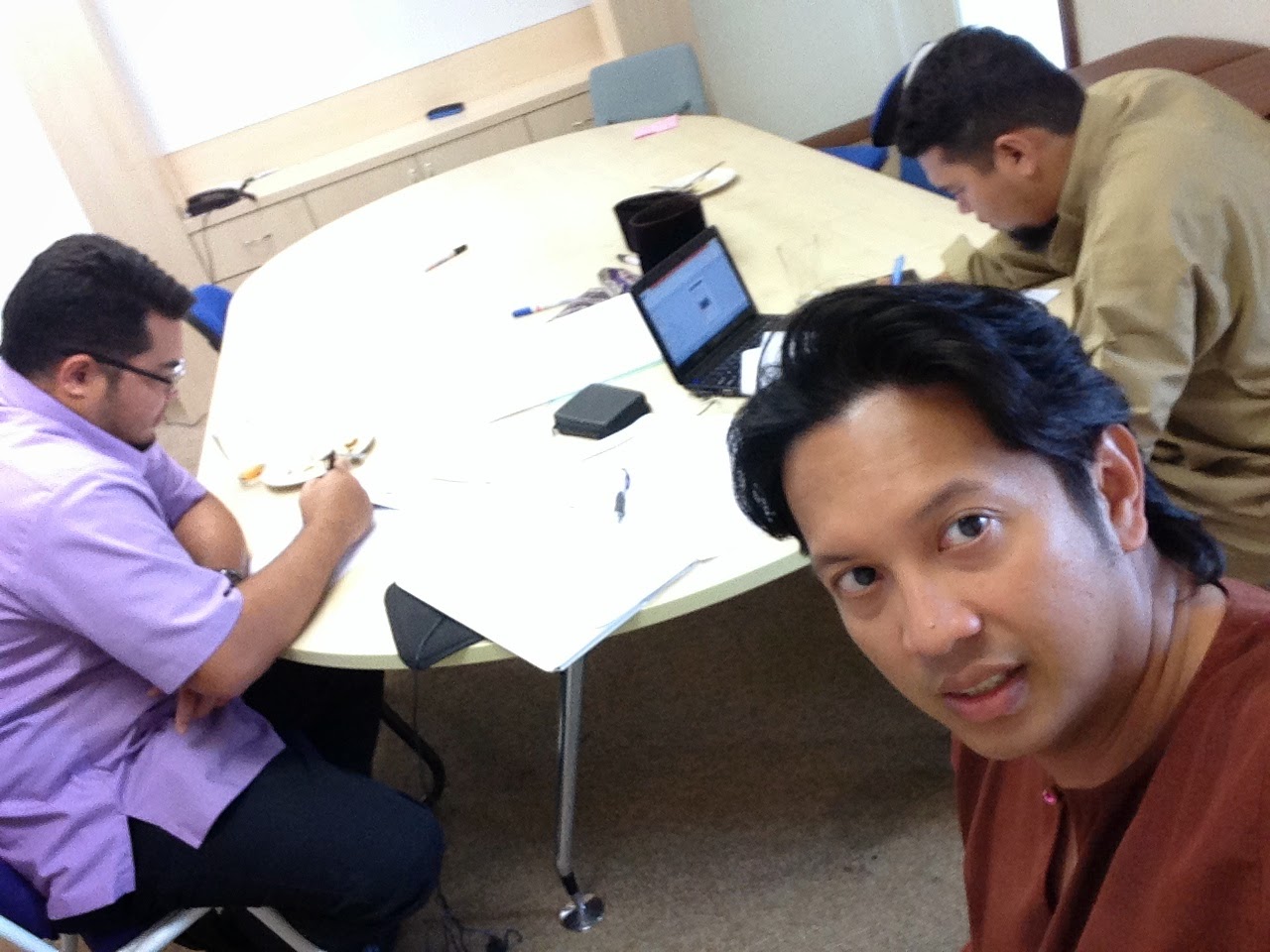 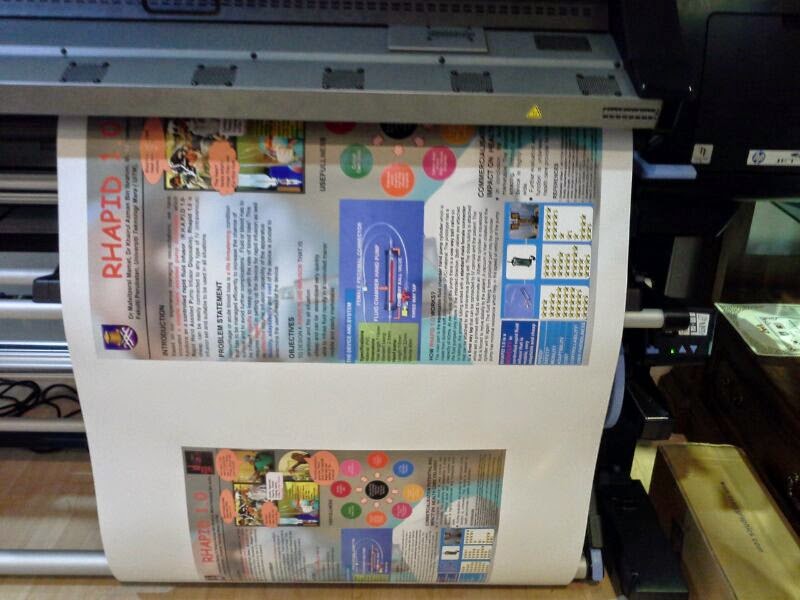 The idea was simple. It was something that we do need to use in our hectic OT life. With exposure, it was an idea which was a dream to be. and hence the formation of team RHAPID999. Haha It was certainly a fairy tale ending to a fairy tale project!
When I got a call from RIBU informing that we qualified for the finals, i was jubilant! Haha Next was pitching and it is in this area that I am really confident to play my trade :)
*to be continued in another post*
Posted by mafeitz at 7:12 pm No comments: