The climb to the top was just the beginning of the whole adventure! Imagine, how after a bit of rest we were off from Thredbo with our destination next- Canberra to hitch off Deeno & Pak Am, and next straight to the Blue Mountains National Park which was an hour away from Sydney.. therefore, a whole night drive to our destination! Luckily Australia can be straight forward as with the GPS set, it was Apip and my turn to sleep during the drive. 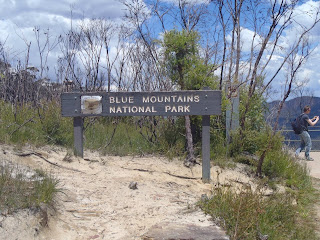 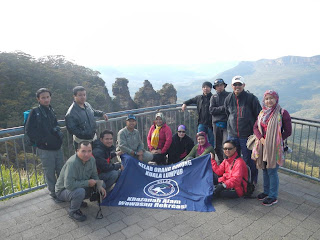 The main attraction for this UNESCO heritage site is the three sisters, a remarkable geological formation of three stones which has its own aboriginal fable. If you happen to be in Sydney, its a must to go to this as it will not be complete as how it has been advertised! haha.. The group tried to trek down to the waterfall but i guess being the end of spring and summer, it was not as impressive as how it was shown.. it was just a small waterfall as me and Abemu were following the trek to it. The view was amazing.. Masya Allah, the clear blue skies again became the determining factor for such beauty to the eyes :) 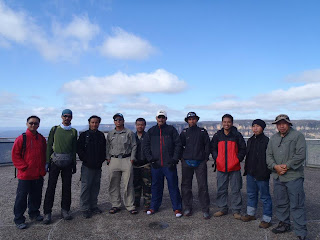 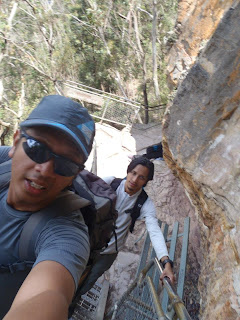 The Giant stairs.. going down to the foot of the 3 sisters 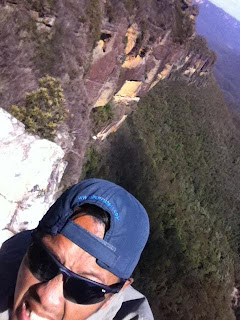 better pic of my position from Abemu's camera 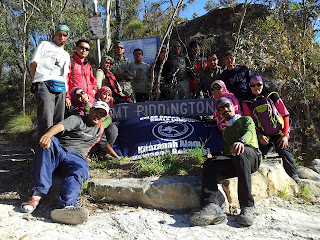 And as a climbing group, it would not be complete for us not to try and reach the peak of the land which we conquered. Thus.. Mt Piddington and One Tree Hill, as the highest point on this 1000 acres of reserved land. 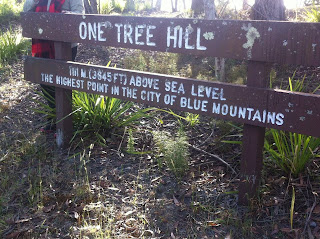 17 November 2012, Alhamdulillah with my fellow OGKL members summitted Kosciuszko! It was an enjoyable trip and the one that i have been waiting for since early this year. In fact, i bought the Return KL-Sydney ticket early because i never thought i'd be extending my stay in Perth!

Took the Qantas flight from Perth to Sydney and I must say, after being a loyal customer of air asia for travels, I have forgotten how it feels like to travel in a premium airline. Eventhough it was domestic, the full package was there ie food, entertainment and pillows to sleep on during the 4.5 hours flight!
I arrived in Sydney too early, at about 6am and waited for the team to arrive from KL at 12 noon! I have indeed explored Sydney airport and i now know where one would like to be if being in this airport for that amount of time.. hahaha
The whole team arrive and it was a mini reunion for multiple trips i had with them before; Deeno,Saf, Apip, Eryn,Taha Kak Ana, Uncle Appa, Abemu ( i know how he got that name.. haha) PAk Am and of course the beauty of doing an OGKL trip is you get to meet new people. I was introduced to Arif, Abg Yusof, Fakhrul, Sabri, Naim, Nora, SQZ & Arnie.
After a bit of tough negotiations to get our transport, we were on our way to Thredbo which was 600+ km away.. Perrghh.. jauh tu nak drive.. hahaha I was the designated GPS reader and off we were in our three SUVs.Honestly, we only really started at 5pm after the stop in Bankstown to shop for our breakfast and maann.. we were soo late! The route can be confusing at times as I was new to the Navman GPS and with twist and turn, we went down all the way to Canberra before heading to Thredbo.
We arrived in our place of stay for the night really late! And after a wholesome meal of my own recipe for pasta hahaha (sorry ek sapa yg tak dapat.. tak sangka lak org makan sampai menjilat pinggan!) ; a briefing was done by Apip with a bit of taaruf before off everyone went for sleep. The temperature was really cold as it was 0 when we arrived :)
Woke up in a bit of rush in the morning as i was to prepare the fried rice as well as the pitta tuna for the climb! Managed to do it in time thanks to the ultimate service of nasi microwave! haha 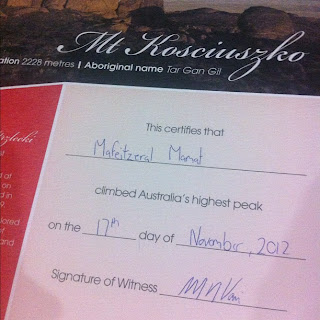 The chairlift which brings us halfway to the top started early that day because of a MTB downhill tournament happening and that made our movement faster. We were up and ready at the Thredbo chairlift and off we went! I literally slept all the way on my way to the end because of the sleep deprivation! hahaha The trek to the top is nothing to shout about; Toolbrunup and Bluff Knoll is more of a challenge, but hey.. even Kinabalu is a simple trail and it is the highest peak in SEA! 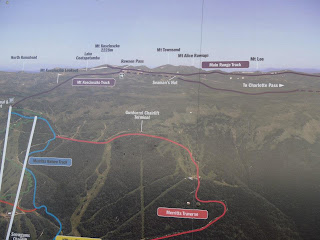 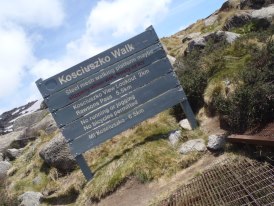 There was still snow covering the pathway, and that brought joy to most of the contingent! Playing and feeling the snow was the main theme! Everybody seemed to enjoy the weather as eventhough it was freezing cold, the wind did not make it worse. By noon, everybody in the team summitted and the shout of joy! Woohooo.. top of Australasia.. tak la tinggi but to be in another Continent :) that is an achievement.. in a way.. thanks to Air Asia.. haha Surprisingly, my pitta became a super hit as everybody was hungry and the tuna mayonaise mix was delicious! hahaha 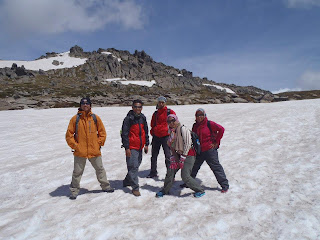 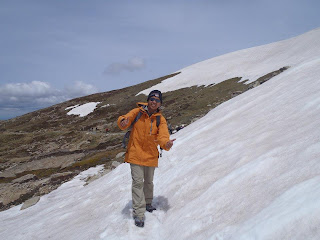 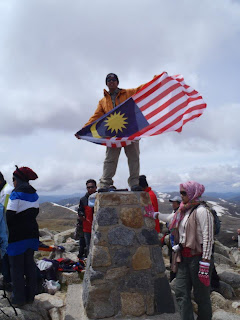 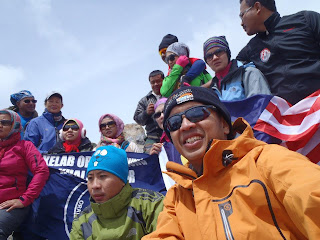 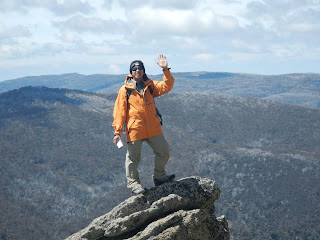 It was great fun and of course, the saying of its about the journey, and not the destination does hold its say :) Thank you OGKL for this trip and i certainly enjoyed the company and the adventure that comes with it! Tak susah pun nak sampai puncak so i do encourage those in Aussie to do this! Seriously... bila lagi ? :)
Posted by mafeitz at 3:57 pm No comments:

We just had to do it again as we were cut short the first time around with an SnR effort. The weather was better and it was the Saturday before Syafiq was to go back to Malaysia. He managed to loan off a car from a friend and that made it possible for us to endevour into antoher MTB adventure.We were off early and arriving to the camel farm was within a breeze. It was not too dry and perhaps suits our bike the best. 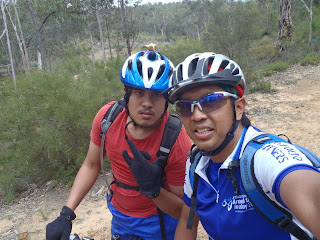 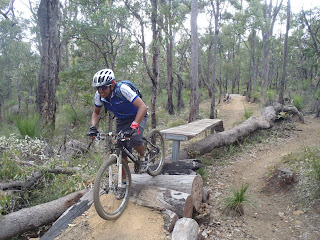 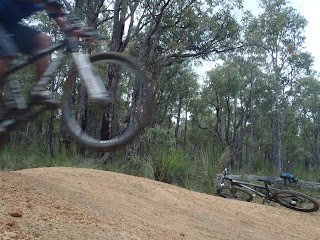 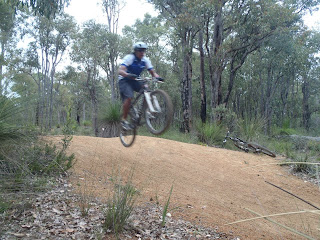 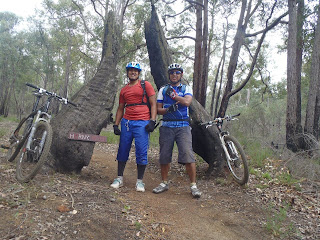 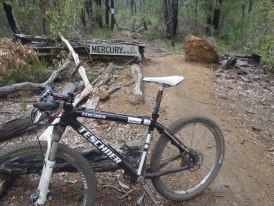 This time around we were better prepared; knowing what the track was like thus the beter handling of the bike. We did try to jump whenever there was opportunity and perhaps we were blessed as well not to return with catastrophic injuries. Both of us were traumatised along the way with our falls but Alhamdulillah, not too bad. The high difficulty trek was definitely a challenge and perhaps when we are better, we'd really go for the DROP on the obstacles.
We had a fun day out. It was challenging in all, physically, mentally, spiritually and technically! Of course, the key that was left inside the car as we were about to leave will serve as a significant memory for this MTB trip.. hahaha
Posted by mafeitz at 1:29 pm No comments: 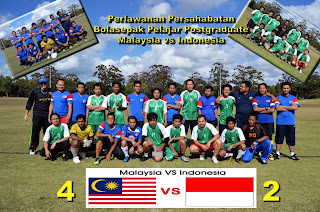 It was excellent to be able to kick the ball again! I've not played 11 a side for quite sometime and somehow rindu pulak kat main bola! I guess.. when i go back, i will try to be active again with DUFC for their weekly weekend football!
Posted by mafeitz at 7:31 pm No comments: