I initially saw the posting in facebook. Izad was looking for docs who can volunteer for his CSR programme. I read through the posting and thought why not. It is something that i would like to do when i have time. Especially it is ramadhan now. I browsed and google to look more info about Pertiwi Kitchen Soup.And it was cool to read through the blogs for the volunteers who participated in the past. I then confirmed with Izad about my intentions and Alhamdulillah he was ever so glad for me to join!
Right after iftar, I was off to KL. I was worried if i am late but the traffic was excellent. It took me less than 20 minutes from BJ to Jalan Sultan Ismail. Amazing isn't it when you realize you are not that far off from KL in distance. It is usually the traffic which slows your travel time.
I was clueless about how it is being done, as they wanted more doctors to be involved in this programme. 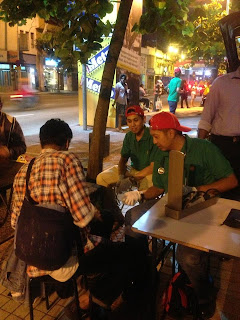 From the SIme Darby building in Jalan Raja Laut, we walked to Tune hotel and beside the main road, we saw the setup. People were already queing as it is a routine thing done during the week. This time around , they saw the whole group clad in green (Sime Darby colour) haha The kitchen Soup van was ready to distribute the food packs prepared earlier.
I was introduced to Dr Muhammad-Kumaran (a South African) with his wife. and they are the main core in organizing the clinics on Sunday night. We were straight away into our duties, a simple day to day clinic running. Of course, we had loads of patients waiting for us. It reminded me the time when i did locum and at the same time, glimpse of P2 HKL. The patients are mostly the typical patients i had with me during those days. I guess when P2 closed, they became homeless and it is around the Kl streets that we see them. 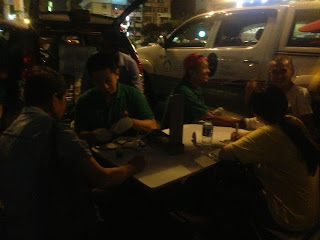 Next stop was Kota Raya but the amount of patients waiting for a check up is not as much as in Chow Kit. Seeing Kotaraya at 11pm on a Sunday night is different from what i used to see. I've not been to this part of KL >15 years therefore it did bring some nostalgia. People were waiting for food to be served and we had quite a crowd there. 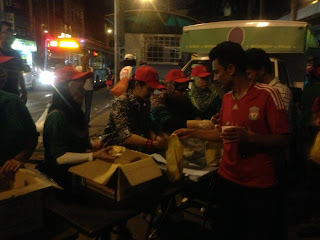 The last stop was the most interesting stop. As it was under the Jalan Syed Putra bridge. This is the heart of the homeless community. An organized terrace and borders between each member can be seen when one walks along River Klang on the embankment. You might have thought most of them would be the illegal immigrants but by fact, they are all fellow Malaysian citizens. Such poverty and seeing their large simple lifestyle, one wonders how they survive in their day to day running. 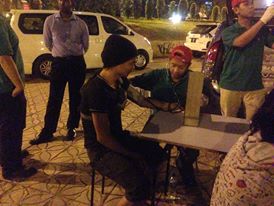 One might argue, they become homeless and live in such conditions because they decide to do so.There might be a number of them who are like that, but i am sure there are a big number themselves who are just unfortunate. They just dont have the means. More so the ones with infectious diseases such as HIV and Hep B, the social stigma is still as how the casts are that they just have no where else to go. I guess, i do realize why my former Consultant in medicine emphasized how we should treat all patients the same. Itis just so easy to slip into the judgemental mode and be unfair to them. 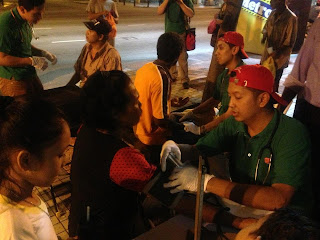 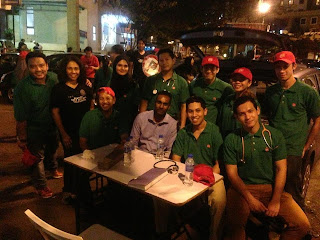 We had an interesting mix. Sazzli, a colleague of mine was one of the doctors invited. We didn;t know both of us participated in this programme and it was fun to see Sazzli shocked seeing me! There was Dr Chen as well, an Aesthetic physician who unfortunately had a bout of asthma attack during the trip. Dr Fairuz, a Public Health trainee was certainly in his elements while doing the check ups. They had to give us the manual BP cuff and i can't remember the last time i used it ( being anaes and techy as well.. hahaha) 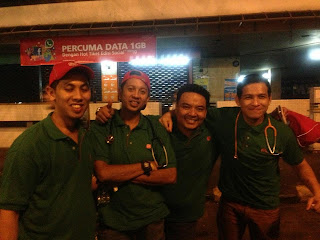 Thank you Izad for the opportunity.Insya Allah, i hope to have the enthusiasm of serving as how the regular doctors who does it week in week out.I do salute the efforts of Auntie Munirah to sacrifice her time and effort for such a noble cause. Insya Allah.
Posted by mafeitz at 10:41 am No comments:

Its the 16th day of Ramadhan today. Time flies very fast. It'll be Syawal in another 2 weeks and its August next week! I can't believe I left Perth only mid February and there's a lot that has been happening ever since.
I'm tight with my daily routine that I've not done raya shopping for the kids or even sending my kain for baju melayu! haha I'm not sure its due to laziness or me just not prioritising properly.
Alhamdulillah, we've successfully completed our 6th open heart surgery in UiTM. I am very pleased with the outcome so far. The plan is, we are getting busier with having 2 Cardiac OT days per week. I am more than happy to commit and Insya-Allah will vie my best for the institution. Its time that i look for a partner as it can be hectic.I wonder who would be interested to do cardiac, or if they are already one, to join us in UiTM. It'll be tricky to look for somebody that i can work with.
On another note, I'm currently doing the Department's website. Thanks to technology, its easy to do one today than say compared to 5 years ago.
the link.. mafeitz.wix.com/anaesthesiauitm ..
do browse through and give your comments! It is still at its infancy stage but I'm not looking into an award winning site. Just some info on our department and the activities that we do.

Posted by mafeitz at 9:31 am No comments:

It is the holy month of ramadhan, A month of celebration but at the same time a remembrance of how we should always be thankful for what we have. We are getting busier in Anaesthesia UiTM but I am thankful that we are progressing as how we should lately. Alhamdulillah, the 5 CABG was done uneventfully and the plan is after Eid, we will do 2 open heart cases per week. Even the thoracic component is going on strong with the few complicated cases that was done.
I am happy but the same time sad that my two initial colleagues, Suraya and Hady are not with us anymore when we started CTS services. We were working for it for about a year when the 3 of us went our separate ways.Don't get me wrong, there was no feud or dissatisfaction but the decision for our own future. I left for Perth, Hady went private and Suraya into business. We had a good thing, the 3 of us but it was not meant to be.I'm sure they would have been proud to see what UiTM Anaesthesia has achieved in this short period. 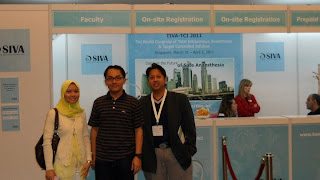 As much as I can, i do try to maintain my link with Sungai Buloh Hospital Anaesthesia Department. I do feel I can contribute a lot to the development as well as being in touch with the hecticness of KKM hospitals. ICU can be a nightmare to manage but somehow, i do enjoy it. I guess thats why i pledged to do Anaesthesia and it is a part of what makes me today. It can be disheartening to decide on life and death issues but again when i am not oncall as often, i do feel fidgety and loathing for that 1 moment of terror. 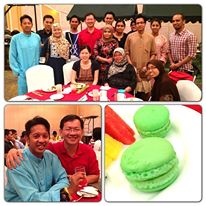 Another first for Medic Fac UiTM

I must say, when Prof Zamrin said that we will be doing OFF PUMP CABG today, I was a bit worried as my experience in handling off pump is very limited. Alhamdulillah, Prof Amir from HUKM came around to help and facilitate. They have been doing this together before therefore he is the best person to be around for this case today. 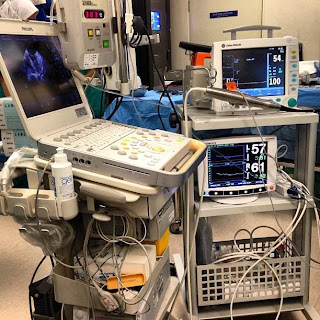 And today 2 July 2013, Another history mark in UiTM calendar as the first Off Pump Bypass was succesfully done. Alhamdulillah :)

Posted by mafeitz at 5:57 pm No comments: 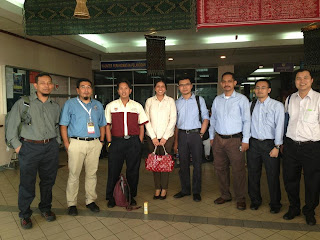 SIGRA (Special Interest Group in Regional Anaesthesia)  lobbied for this event 2 years ago and Alhamdulillah we won the bid. The task to organize the biggest Regional Anaesthesia Conference in Malaysia was challenging. MSA did most of the organizing and Shah as the SIGRA Convenor did the necessary to get excellent speakers & facilitators for the event. 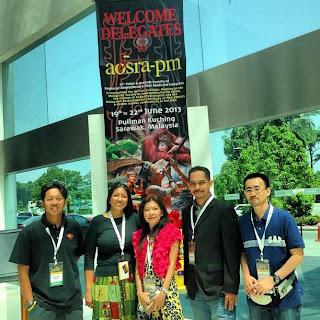 Like our usual MSA meetings, SIGRA members were more than happy to run the hands on workshop. I reckon our workshop and live demo is cool because most overseas conference do not really show how the block is performed on real time patients. We did the workshop in Kuching GH and Alhamdulillah it went well. 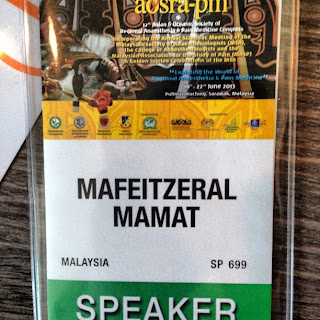 When one of the speakers pulled out, I was asked to replace him. it was a mammoth task considering I am still young and new at this. However, i took the opportunity to speak and it was a real nail biting experience. Interestingly, I did not loose my cool but i guess looking back, i could have done a better job with the content of my presentation:) 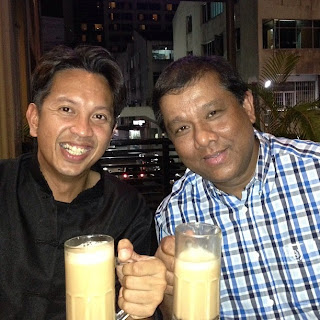 Honestly, I was mostly knackered during the whole conference. The stress of doing the workshop and before presenting totally knocked me off. I did not go anywhere on my own (very unlikely of me!) as I've been here 2 years ago during Yo's wedding. All my evenings were spent with the SIGRA team on the sponsored dinners around town. I guess when you are one of the speaker, the spectrum changes as compared to if you are the participant. 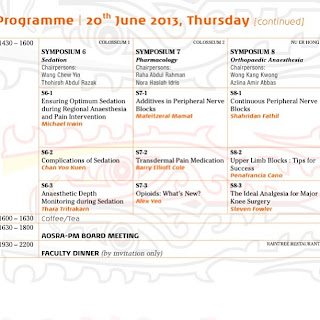 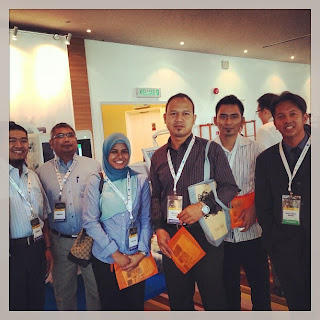 Posted by mafeitz at 5:47 pm No comments: