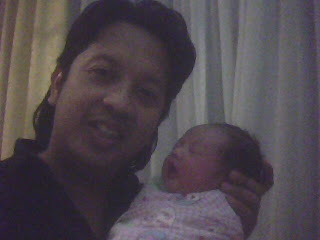 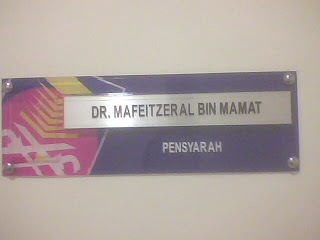 And of course, officially now.. I have my own office :)
Posted by mafeitz at 12:16 am 2 comments: Links to this post 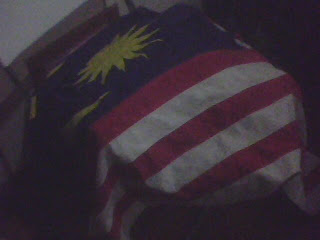 I cant really remember when was it.. circa 1994-95? not really sure. Most likely before the big clear out of match fixing. But what happened shook me, it was a post Malaysia game ; not too sure which game it was and which competition. maybe one of the qualifiers. we lost badly and by the 70th minute, the supporters were booing the team and most of the crowd were leaving.One who sat in front of me who during the time he was there, totally insulted the team to the amazement of the crowd. Not sure whether he was just venting out due to his own problems. What i was sure; before he left, he was kicking and stepping Jalur gemilang.. and threw it away whilst spitting on it. After the game, i took the flag with me.. took it back home and hoped that one day i can bring it back to see it waved in glory. 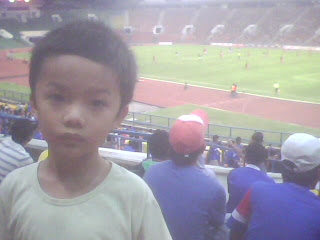 Today.. it became the day.Me and my son, waving that same flag which was battered down almost 17 years ago. To wave proudly as Malaysians!
It was my first visit to footie stadium with dzaeffran. I wanted him to feel the electrifying experience in supporting team Malaysia. If not for the house moving, i would have been in the stadium to witness the first leg of the AFF Cup. But the friendly against Hong Kong was a small time game. Rarely people would go to watch and having it in Shah Alam stadium, it would have been a sin not to bring dzaeff.
But i was wrong.. due to the hope that the current Harimau Malaya gave as AFF champions, people were flocking the stadium. It was not full house, but for a friendly it was an amazing crowd. To witness Dzaeff's expression as we were walking into the stadium was priceless. The fanatic fans were chanting and singing; a rare scene in Malaysian football.
And when we scored just before the first half ends was something that the crowd was waiting for. We played well, it was nice passing and game play with skill. Dzaeff may not have concentrated fully on the game but when we scored.. he was jumping in joy as well and that was what we were all there for! 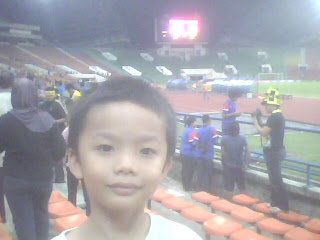 It was just a friendly but the mood and hope that was given to us, shown on the team's determination. The confidence were oozing and obvious from all the player's body language. It was a good father-son bonding as well and I was glad i persevered to go eventhough i was feeling a bit out after maghrib.
Kudos Malaysia.. viva Malaysia!
Posted by mafeitz at 11:51 pm No comments: Links to this post 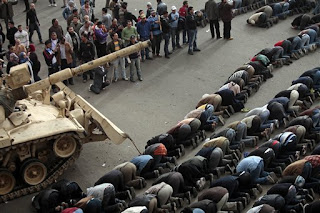 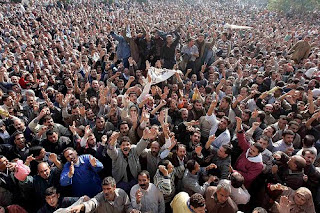 I was glued to the tv till midnite, switching from Aljazeera, BBC and CNN ; updates of the current ongoing revolution March of the millions y the people of Egypt. I was witnessing another history epic in the making, how people when they come together as one with one sole reason can make the difference. It was something unexpected by Mubarak himself i guess, as people in mass forces flocked the main cities of egypt; cairo, alexandria. protesting "LEAVE... LEAVE.." The years of suppression by mutiple regime through the years seemed to break out of its pandora's box today..
Wow.. i never thought i would see another similar scene which mimicked the Iranian Revolution in 1979 in my lifetime. With our current media coverage, it is possible to witness it closely. The Egyptian government ordered an internet blackout to forbid information coming out directly from the people.
Across middle east Tunisia, Jordan.. the revolution heat is sweeping through.. slowly but surely. People are standing up, risking their lives in the name of reformation. Brave brave people. Determination and sincerity of wanting change says it all. Of course, it is easy to say that there is a manipulation of political will but when you see rakyat in the masses coming out, can you pinpoint to anybody leading them? Egypt is making another feat in history. SOmething that will mark a big change in how the middle east would shape itself in this century. It marks the sure future of interesting things to come.
I pray to the egyptian people that god would reward their intentions. 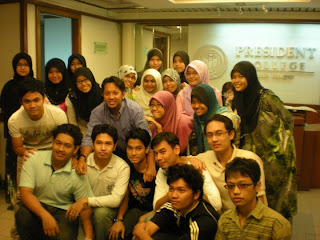 The latest batch of egypt bound medical students i met last September.. my prayers for their safety..
Posted by mafeitz at 9:39 am No comments: Links to this post