I had fun this week. Not fun "fun" but fun in administrating my anaesthetics. I guess after doing lots of bread and butter cases, you do long for that stress in planning an anaesthetic for your patients. Patients may come with multiple problems and to avoid any further issues, one needs to plan which technique to use.

Honestly, the anaesthetics is not an issue. Anaesthesia is safe and you can be assured that you are well taken care off. Its the issues that might crop after, as an example: a patient may need to go for a surgery to settle some sepsis source issues but at the same time, just recovered from a bout of pneumonia. Giving GA can be simple but the patient may end up in ICu for post op monitoring and what further happens will be delayed discharge due to more time taken to recuperate.
I was faced with these patients isssues this past few weeks. Therefore, i do have to resort to techniques which would minimize risk. ie peripheral nerve block and TCI. I had fun with the TCI remifentanil today as it made my nurses go like, " what the heck is my doctor doing?" haha
Alhamdulillah, what is important of how this knowledge can be put into practice.And it becomes a satisfaction when you have options to decide with when you have to solve the pressing issues.
Posted by mafeitz at 5:33 pm No comments: Links to this post

Email ThisBlogThis!Share to TwitterShare to FacebookShare to Pinterest
Labels: Anaesthesia, private practice, so you wannabe an anaesthetist 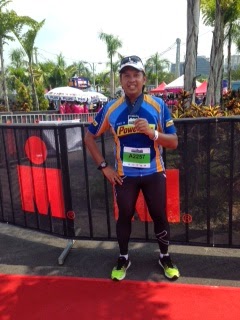 Last year we entered the relay event in Putrajaya 70.3 in the hope of being a part of the carnival. Unfortunately, it was classified DNF when Kamal could not continue and the mood became sombre. It was not satisfying especially for me being the runner, i had to wait for at least 5 hours in the hot sun before it was my turn to run. Azad had to leave for Vietnam last year, and the atmosphere was none to feel at all. Because of that experience, rasa taubat cam nak join relay.. 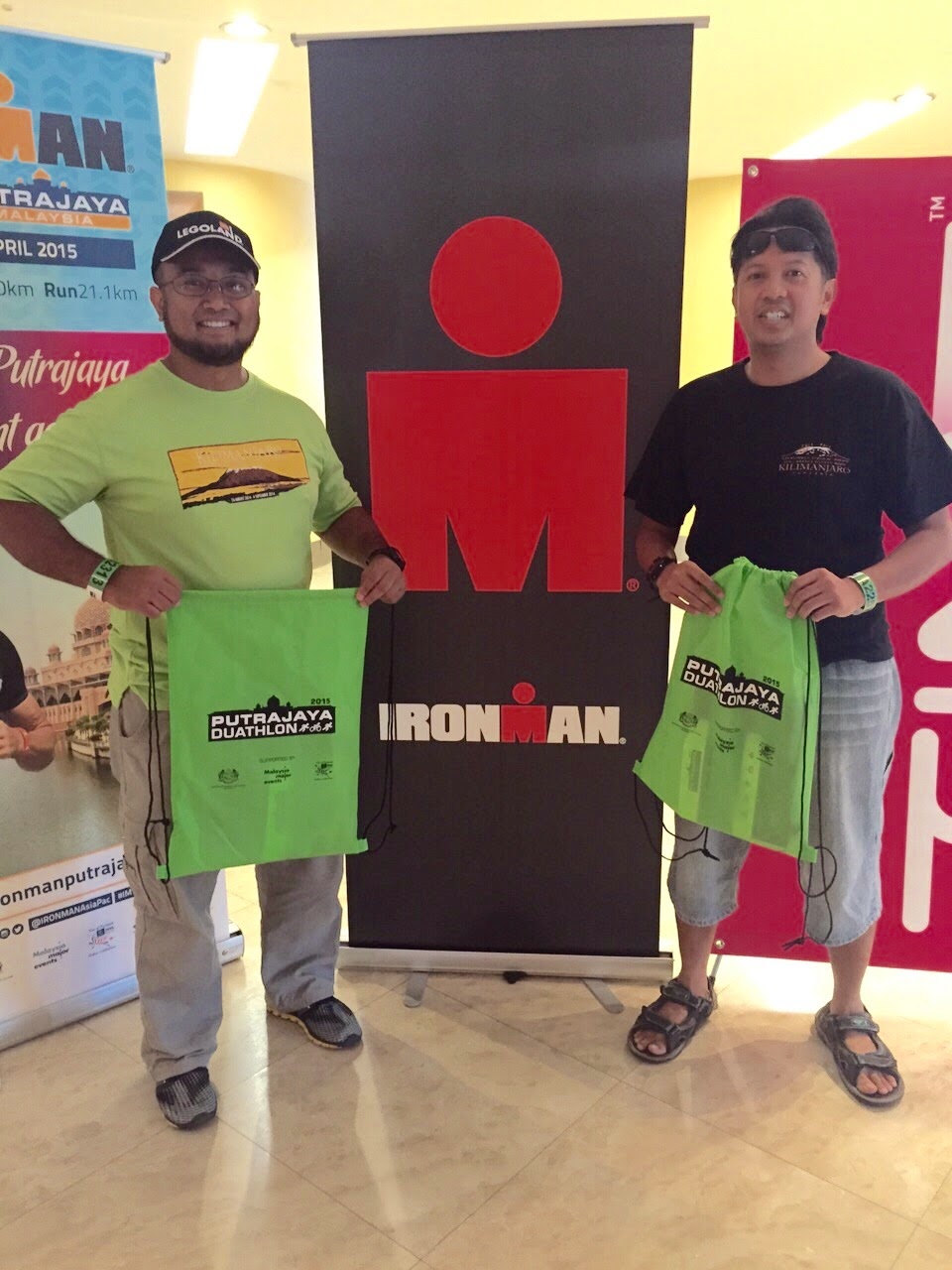 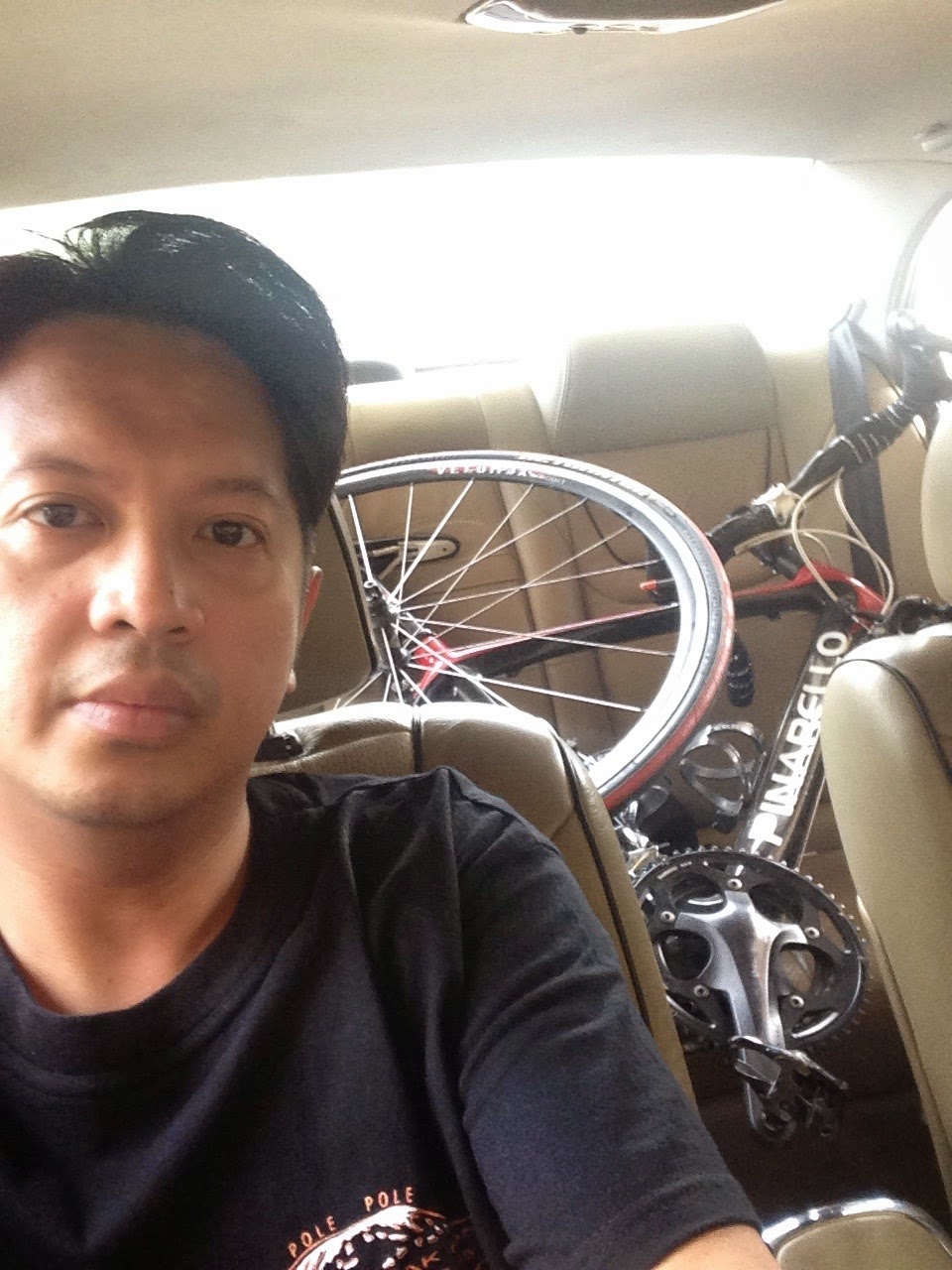 This year somehow, i guess the participant numbers must have not been encouraging, the event organizer decided to have Duathlon as well. The distance was not too bad and despite me not having enough training, i registered without hesitating as i know how the atmosphere can be like. To me what is important is to join the event and finish it, janji habis! Haha 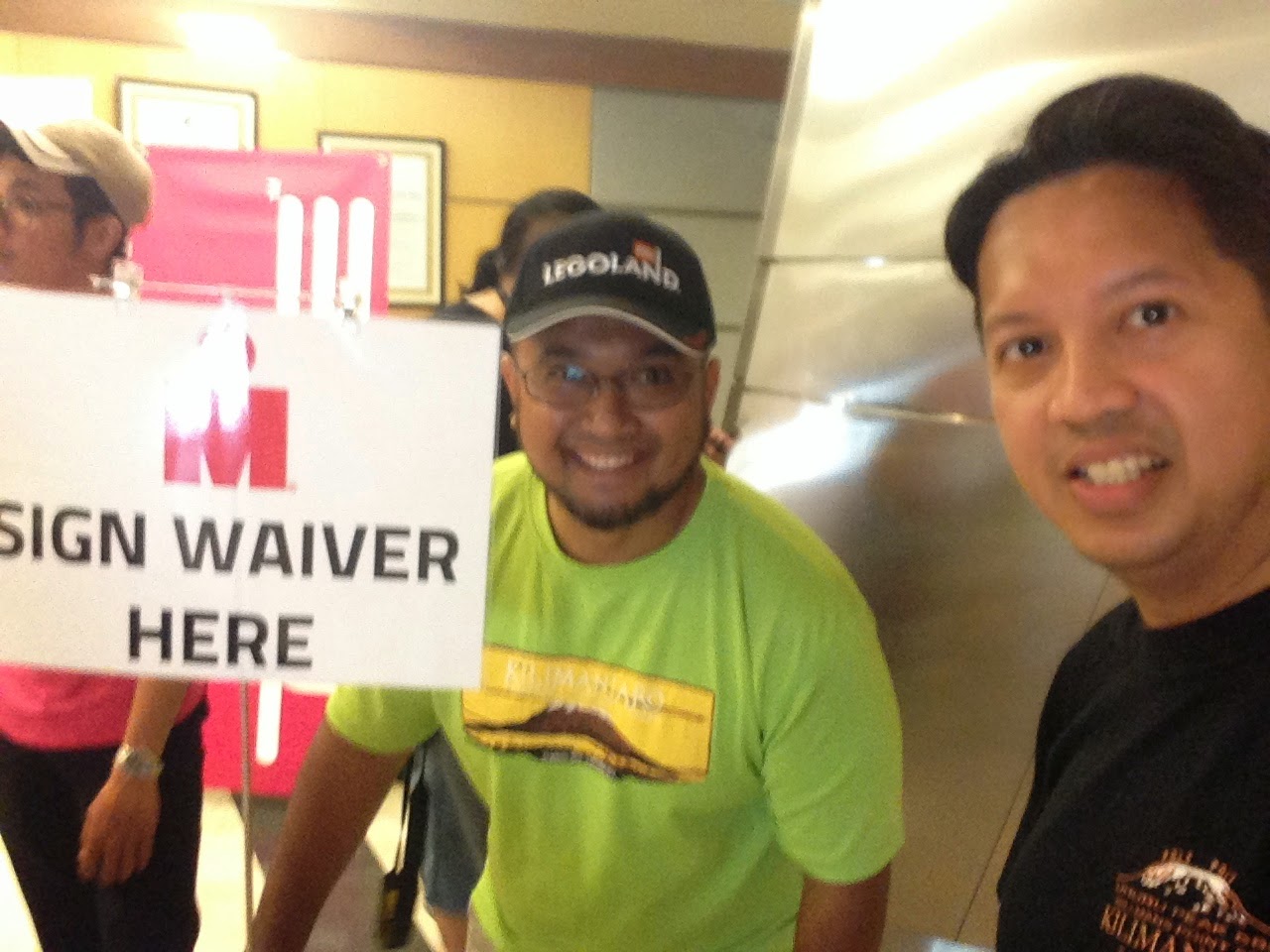 Azad was as enthusiastic as ever as he registered immediately when i mooted the idea. It was something doable and i was happy to have somebody with me. The gameplan was simple, Janji Habis despite kena potong by those who can be double my size hahaha
We took the opportunity to collect the bib and place our bicycles the day before. The atmosphere was as how i imagined. Memang best, the brand ironman..
We were early. Azad and I woke each other up and with our cars convoyed to Putrajaya. Parking was ample and from that early morning, it was electrifying. we took the opportunity to pray subuh at the mosque which i thought was excellent! Never that i thought the venue would be so close by that it was convenient to pray in jamaah.
How did i perform, well.. the first 5km run was a breeze for me. I was comfortable and not too tired. I did not push myself but i did run all the way. My knees were doing fine. The cycling bit.. huhuh.. this is a total weakness as my only cycling training these past few months was on the trainer; even that it was not too long on it. So as expected, i could see people passing me easily as i struggled in this mere 45km race! My sister has been completing the 160km regularly and if she were to join this event, im sure she'd sayur me anytime! hahaha And the nighmare was at km40 i think, when my right knee jammed on me! total lock..dammnnn.. I wasl ucky i did not fell down but managed to cool myself down before restarting. I was really lucky i did not end up with a DNF hahaha 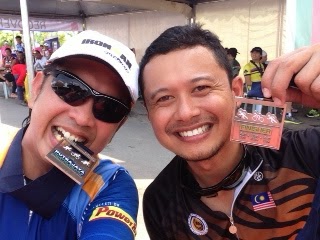 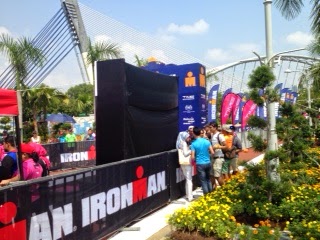 Of course, the final 5km was a lenggang kangkung all the way. I could not be bothered to run as i was not going any faster anyway. Alhamdulillah, everything was in due time and i managed to finish it in one piece! haha Memang rasa tak puas hati tengok orang potong but i am thankful i managed to do it despite my lack of training due to my injury.Azad was not too far from me after he caught up during the cycling leg. In fact his time was at least 6-7 minutes better than mine during this leg!!
It was cool to see my friends like Aktar and Shah completing their half ironman distance in a convincing time.. Hmm.. i started before them but they have surpassed me by miles! Hahaha 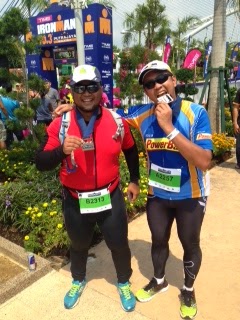 All in all, i enjoyed the event. It may not be my best performance but my most satisfying. I will come back, and camana ek..my triathlon dream?? I need to realize it.. 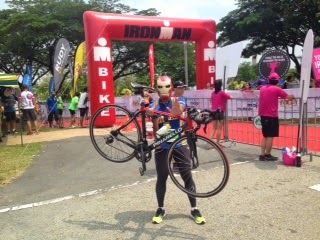 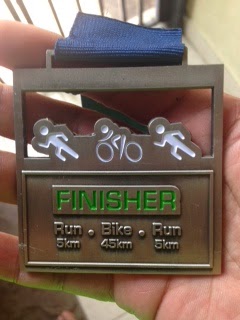 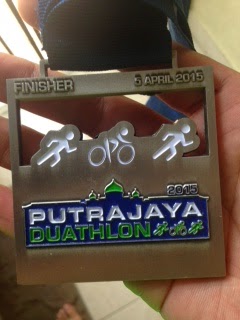 Posted by mafeitz at 11:54 am No comments: Links to this post

My knee was getting better and i needed a better motivation to be active again. I am getting back the fat i lost few years back. Luckily there was a bib available for the run organized by UiTM FOM. I was non hesitant to join the 8km run despite not running for the past 2 months!! 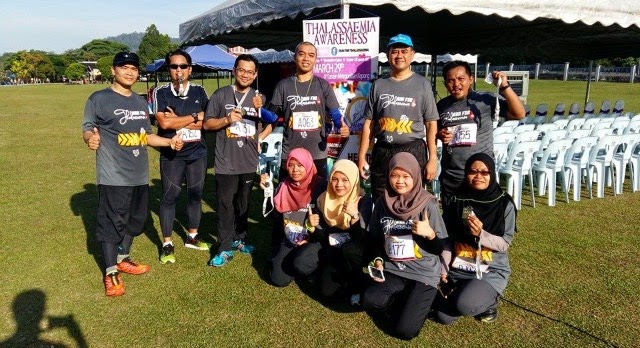 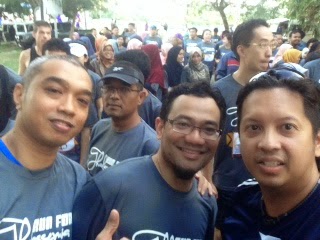 The run was held in kepong which the taman was famous for its evening layang-layang session. The affair was moderate but definitely well organized. The students were enthusiastic organizing this. I saw Adli during parking and he gave me Abid's bib. Apparently Abid had to go for a course in Singapore and i was damn lucky to have it for me to join this run.
The run was not that bad. I followed Adli's pace earlier but only managed to keep up till km 5. He has definitely improved and i guess his preparation for his first ever half which will be in two weeks had been optimal. I was exasperated but tried to maintain my cool keeping behind him haha Imagine not running for 2 months and now you're trying to run all the 8km non stop. Memang tak larat hahaha
I enjoyed the run and was happy that my knee and legs were able to cope. At least i have this trial so that my Putrajaya Duathlon the week after will not be too bad, or so i hope.. 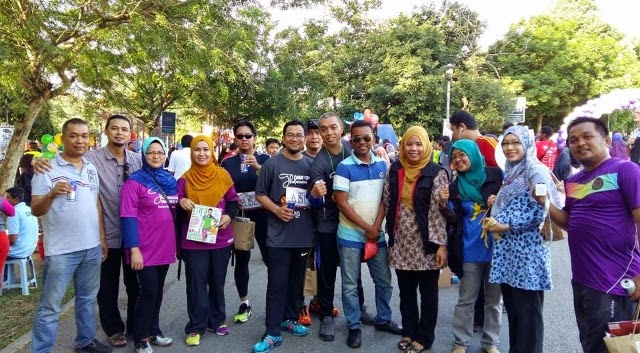 Posted by mafeitz at 11:35 am No comments: Links to this post

Its your place now

Call me sentimental but when i saw my own scrubs with my name embroided on it, I felt good. I felt belonged. Haha Memang jakun nak baju sendiri :) March has been a good month as the cases doubled compared to February. Things are getting busier and the cases we are getting is getting more complicated. Maybe not too complicated as other places that i know but enough la. You don't want to be too ambitious that it can cause you more problems than anticipated. Its a mixed feeling honestly, as one would love to just do the simple cases and chill with the remuneration, at the same time missing the intensity of high risk cases. The high risk cases were the main reason why I joined anaesthesia. Its the balance i guess, and perhaps a good mix would fulfill my needs. 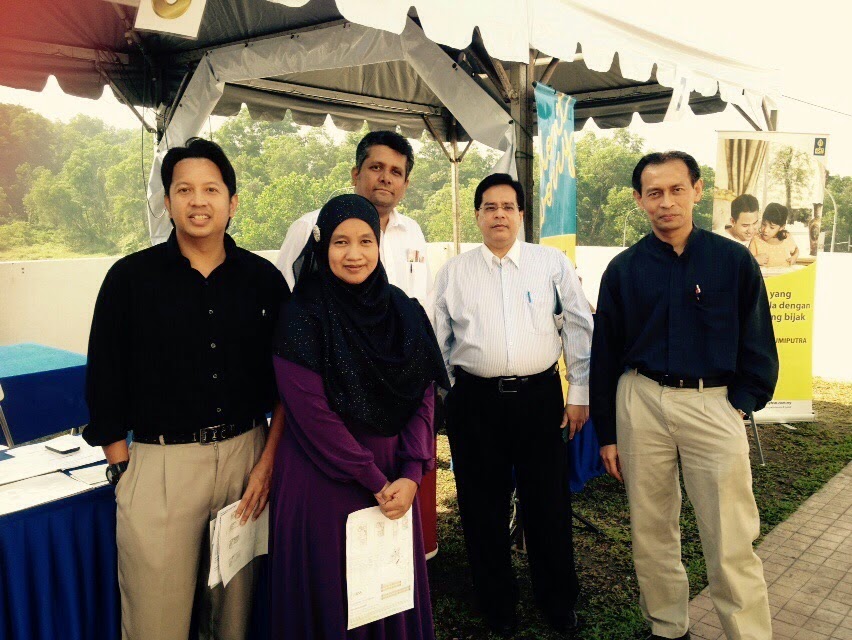 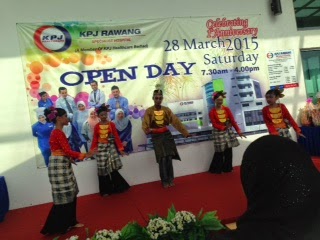 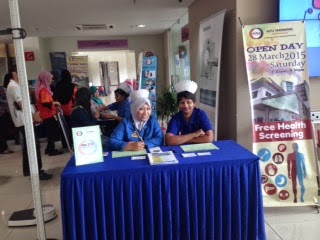 We had our first anniversary Open day recently. KPJ is very good at this, creating events and making the whole staff work as a family. It is very difficult not to like KPJ management with the approach that they make. It was a hot Saturday afternoon but that did not deter us from enjoying the day.
Posted by mafeitz at 8:51 am No comments: Links to this post