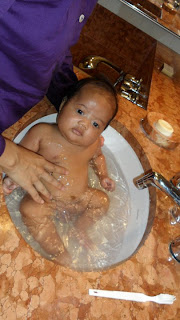 MDQ4 aka Dzareif has really grown! He was 3.3kg at birth and looked small then. With breast milk power? waaaa.. a whopping 6.2 kg during his 2 month's scheduled immunisation! He is heavy to carry anyway.. hahaha and the way he fits nicely into the sink during our trip to Singapore was cute!
Dzareif is certainly different when compared to his elder siblings; he is much more demanding and tend not to settle easily. A "breast" session is not enough for him as he needs to be held closely before going to sleep. It was a far contrast from Dzaeffran who'll just doze off after milk, and only making "some" noise when its the next session! Wifey was weary during her 2 month's maternity leave.. hahaha 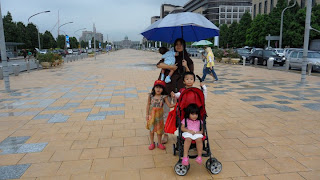 We tried to catch the hot air balloon in Putrajaya l;ast month with Dzareif having a go on a trip before Singapore. It rained though and we did not see high flying balloons.. but bringing all four for a trip hmm.. is not an easy job for an individual with your eldest being 6?! And i can't imagine how wifey will cope with them when i leave for ..... ( hehehe.. a new venture which i will reveal when everything is confirmed.. :)
Posted by mafeitz at 6:21 pm