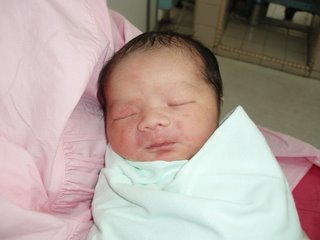 Alhamdulillah , my son was born yesterday on the 16th of November 2005 at 9.20pm. Syukran lillahi taa'la for this gift; a very special one.

I was barely recovering from my terrible call ; with two maternal mortality at 3 am in the morning. I was in the labour room resuscitating a 30 year old indian lady ; post op 6 hours when she suddenly collapsed. I was called to the scene to resuscitate but after an hour of CPR with 7 defibrillations.. we were unable to bring her back. At the same time , another mother was resuscitated in the A&E ; brought in from a private maternity home after they were not able to control her bleeding post SVD. I was so knackered in the morning ; that when wifey told me that all the wards were full ; i was hoping that maybe we can delay the delivery. She was at 38 weeks and the plan was the induce her.

Allah is great ; though we had to register in the 3rd class ; to our surprise during the assessment her OS was 4 cm.. and the CTG reading showed contractions. She was not feeling any pain at all !! She was sent to the labour room at 3 pm yesterday. and we were totally unprepared for it !! No specialists were around and my colleagues were busy in the OT..so i decided to put the epidural myself !! haks.. really unethical eih.. But..hmm.. it was a good block..as she had painless labour.. PAINLESS.. that i wondered whether it was TOO painless..

Her progress was well.. and her os was fully dilated at 820 pm. That was when she was unable to feel anything.. the contractions nor any bearing down feeling. It became a bit difficult as she had no clue of how and when to push.. Vijayan then placed a silicon cup to pull the baby out.. still the maternal effort was poor. Almost all the midwives were there encouraging her when the baby decided to pop out..

But... the baby was not breathing.. and Haniza went beserk !! It was a heart stopping moment for me at that time seeing the baby flat. They brought the baby to the resuscitation area and bagged him.. Slowly.. he cried. but his limbs were weak ..and his respiratory effort was worrying. Apgar Score 4 and 8 . Quickly the baby was transferred to SCN ( baby's special care nursery ) - I managed to bring the baby for Haniza to see as she was crying all her might ; memories of the old MSB. 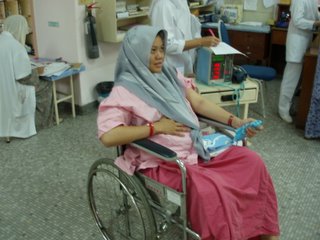 I had to act brave in front of wifey but only god knows how worried i was ..so worried that things might go the other way. I followed the baby into SCN and watched him closely. I was praying hard that please.. please let him be OK.. Haniza was sms'ing me non stop..asking.. is the baby.ok ..is the baby ok.. I just replied Y.. but i don't know at that time if it would turn out to our favour.

Slowly his breathing rate came down.. his heart rate became normal. There was no need to intubate as he was breathing comfortably under the headbox. Paediatricians had to cover him with antibiotics anyway in case of any congenital pneumonia. At that moment , i really don't know what the outcome will be.. fight..baby.. fight.. i said while glaring at him.

I brought wifey to see the baby at midnight ; and Alhamdulillah he looked fine. We were with him at 2pm today.. breastfeeding the cutest creature i have ever seen in my life !! Wow.. the feeling is great.. to have the baby in your arms.. i just cannot stop kissing the baby.. my little precious baby..

Today.. on my way back home.. i cried.. don't know why i cried.. but i just cried all my might . It came out of nowhere and unplanned. Maybe only when i am alone ; my feelings show itself. It shows how sometimes you can show superficiality ; but you cannot lie to your own conscience. I am thankful to Allah.Alhamdulillah...

Only today.. that i reveal to the world the name of my baby..

Allah blesses those who are patient...Haniza and you have proven you faith...thus Allah rewards with a beautiful gift...Insyallah.