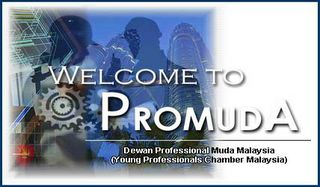 Attended PROMUDA's AGM today in KLGCC. Nope.. did not contest for any posts - just as an observer..siapa lah kita.. ikan bilis junior.. hehehehe Well , Dil asked me to help him with familiarize his role in today's AGM - R.O. for the elections.. Kiranya SPR lar in short.. heks..

Spent like > 2hours with him prior to the event ; preparing his script for the session. It was quite fun though , upholding the Kam Cheng trait.. we were a laughing lot when typing the script down in the Club House Cafe.

The AGM went alright ; i was one of the observers in the Election committee - foreseeing the vote counting as transparent as possible. hehehehe.. Remembered the time when i became the RO for the UMNO Clubs of UK... PROMUDA'S election is very mild ..very very mild...

Well, not much of a surprise when Don returned unopposed. 2 Tekadmons are now EXCOs - Dato' Ziad and Dato' Sherrie !! Cayalah .. haks.. from the Kam Cheng side ; Dato' MAL is the EXCO for ICT !! MBUUAHAHAHA mal.. hehehehe kewl. Dil did not contest in concordance with the BIG PLAN.. whatever that is lar.. ( dont speculate.. i'm making this up !! ) Dont worry Dato' Dil , the 3 year MISSIONE DE COUPE DETA is already switched ON .. hehehehe Congratulations to the newly elected committee. Hopefully there'll be lots of KEWL activities and progress in store for the Young |Professionals of Malaysia !!

p/s Alamak !! after finished writing this blog ; baru teringat the gathering last night at Aizans. HAks.. it was fun !! The food was good ( thank you guys ) the entertainment was bizzare.. hehehe liked those AFROS. TEKADMONS are kewl bunch of people.. AMPUN TUANKU !!!!!!!!!!!!!
Posted by mafeitz at 10:24 pm