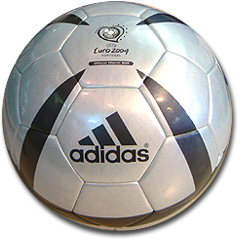 Me , Fiqar and Megat went together to PULAPOL , KL. The pitch was good ; floodlights were on ; terasa semangat nak main. haks.. It's fever pitch again !!! Syamim ( our beloved manager ) was still waiting outside the Quarters gate for our team members who had never been here before.

We played against i don't really know who last night.According to reliable sources after the game , the company was doing a player's selection for their inter company league. So imagine their seriousness facing us the part-timers overweight team !! Haks..

It was good to see the footie guys again after a two years exodus. Boy , Zaff , Ja-a, Ari , Bet , faiz , ( +few others who i can't really recall now but know their faces ! ) and the usual suspects of Nasrul , Huzai , Imran , Adri , Shahril , Lan keeper,Is. However it was obvious that we were not fit as in the 3 halves ; three different teams went in !!!

We were walloped 6-1 , Is scoring ala Ronaldo goal nearing the end. We were outclassed and outwit ; but we thoroughly enjoyed the game.Glimpse of the old DUFC came in patches but the lack of fitness was very apparent. I spent most of the time chasing after the ball as our team was a bit crap on keeping possession. Had one collision with a foe ; but surprising PAIN WAS PLEASURE !!! hahahaha..

It has always been fun playing competitive footie. During my school days it was not very intense. I was lucky that during my stint in UK ; I was exposed to this culture. If i had been in Malaysia maybe i will not love footie as how i am now. The English are very passionate about the game and it influenced me a lot being amongst them.

In Shrewsbury School , the Michaelmas term ( Autumn ) is the footie season. There are 10 houses ; perfect for an Inter house league. School 1st team players were not allawed to play in this League. It went on from August till the Christmas Holidays. The games will be played during Friday afternoons after class. It is the most awaited time week in week out ; gutsing against boys from other houses. I played as a left back ; and sealed that position during my two years there.

It was a time when i didn't know the meanin of contact lenses ; Imagine me playing "blindly" ; not recognizing my team mates faces ; only the white or navy blue jerseys. I was the "smallest" player due to my small physique . ( height being 1.7 m amongst the average 1.8m english youths !! )I was able to cope with the game as i had speed as my advantage ; i was able to beat players to the ball . Hussin and Ady played for their houses too but not as regulars though. I introduced to the school "baggy" shorts ( up to knee length) when at that time the shorts all were like mid thigh length !! My housemaster called me the Hungarian 50's player !!

I can still remember how cold it was when starting the game ; made worse when the English drizzle showed up !!. However body heat took over as the game progresses.I remembered during one of the games when it snowed and we continued playing. Ya Allah , sejuk giller !!! I remembered how Matron waited for us back in the house changing room preparing hot water and blankets to warm us up!! Haks.. there was the other incident when i had a bad leg cramp and was by the sidelines aching in pain. My housemaster came to the rescue but guess who came up to me first ?? Randy ..his dog !! He came up to me and sniffed ; me being the typical Malay then was like.. damn.. damn... anjing ni and screamed for help... hahahahahaha... Kesian Randy .. sure terperanjat tengok apa la mamat ni tak friendly !! ( He actually became a "good" companion during my Sunday morning newspaper reading in the common room )

It was very competitive and physical. I had my fair share of a physical game despite my size. It encouraged me to become robust and i had injured few players twice my size !!! ( haks.. not to mention the yellow cards i received ). Scored only one goal during the 2 years stint but the whole experience was wonderful. We would discuss the game plan the night before the game in the captain's bedsit . The next morning ; the formation and players list would be post up in the house bulletin board.I really enjoyed the passion and game play.

We won the League 2 years in succession. Fact : It was our first time winning the Cup !!! Such an honour !! Ingrams ( my house ) was always known to be crap in footie but somehow that season we managed to beat the odds. I was so proud of the achievement ; I received my House Colours ( 1st year house tie.. 2nd year house scarf ) in view of my contribution.

Wow.. how i missed those times and it was rekindled by my DUFC experience. But that my friend.. is another story...
Posted by mafeitz at 9:49 am

Wonderful and informative web site. I used information from that site its great. »