The on call routine 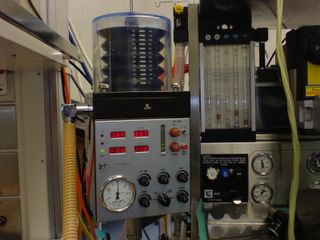 Did my first call post ray period yesterday. I had to miss the all awaited badminton session last night! aarrgghh.. and looks like November and December will tax me heavily with 8 calls per month !! Back to the old HKL routine then.

We had and all men team yesterday and we scheduled plans to have our lunch and dinner outside - hoping that I was able to visit the badminton gang in RASTA late last night. Unfortunately , we were not able to do so due to the hectic emergency OTs with complicated cases. My 2 SMO ( Senior MOs) had to be in the OT all the time as well and neither rested well as how it had always been.

MY 2 orthopaedics cases which was suppose to be a straight forward simple procedures became chaotic due to excessive bleeding. My 82 year old ITP with a platelet of 32,000 bled 1 liter during his below knee amputation as the surgeon accidentally snapped on a major vessel.THis old man's heart was strong and we managed to extubated him. My 20 year old boy bled a lot eventhough it was just a debridement. The thing was , I did not manage to catch up initially because my trusted IV access "caputted" at the wrong time. He went hypovolaemic and was very restless as I only gave him spinal anaesthesia. It went on to about 3 hours as the block was wearing off but i suppose communication is the key and managed to calm him down.

One nearly amputated forearm case came in for reimplatation at 6pm and that spoiled our OT arrangements. It took one OT 8 hours up to 2 am to settle and i hope the reimplantated arm worked. I had one lady with a really bad heart condition up for OP and she was in the waiting area from 5pm and I only managed to check on her at 12am in the morning ! As usual , as anaesthetists we were informed that the patient is allright but upon seeing ; I discovered that she had 3 vessels disease with almost all 80% blocked and she failed her stenting 2 months ago !! Her ECG was SCARY !! And doing her at 12 midnight ?? haks.. I was cursing myself because we cannot postpone her after the long wait ?? Luckily her I&D was superficial and my femoral block was good enough.. with again "REASSURANCE" strategy.. ( + a bit of midazolam.. morphine.. fentanyl... hahahahaha.. ) I wouldn't want a GCS 15 arrest on table would I ?? 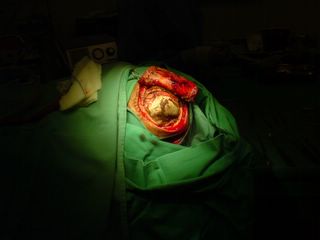 We had one neurosurgery emergency as well for an 85 year old man with bad lungs at 10pm. He had craniectomy done 1 week ago for his intracranial bleeding and unfortunately now infected ; with his CSF leaking obviously when you carry his head up.It was like a leaky pipe. Initially we thought that the debridement would only be superficial thus inserting LMA so that he spontaneously breath.Thinking that we will not to further his dependency on the ventilator machine. Lepas tu surgeon buat lawak pulak .. and opened up his skull !!(picture above) Hakss.. It got me and my SMO praying really hard that things would not go wrong ! Gile punya kerja but we pulled it off.. and I suppose , I can say now how it is possible to do neuro cases wihout paralysing your patient fully ! haks.. please do not try it aahh..

Slept at 4am ; wanted to watch the Liverpool game but I fell asleep instantly after throwing myself on the TV room couch.
Posted by mafeitz at 12:34 pm