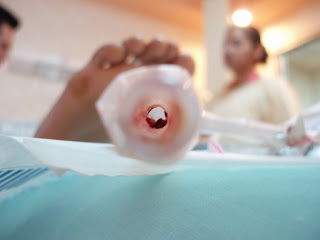 His family were reading yasiin around him as how I've instructed them earlier in view of the poor boy's prognosis. Quitely i tapped his father's shoulder.
" Anak pokcik dah nazak sangat sekarang ni.. Pokcik bisik syahadah ye... " I said in the most gentle manner. His heart rate was getting slower by the second and his pulse was very weak.
"Ready for CPR... " I instructed my nurses.

The unfortunate 24 year old man , who collapsed in a nearby Health clinic 13 days back , had almost all his small bowel resected as it was dead - gangrenous upon arrival in our hospital . He then remained septic but it was a bit funny that he never recovered fully - when we woke him up ; almost always restless ; potraying severe pain . He never tolerated his feeds from Day 1 ; and yesterday he went into Septic shock. Through differential of opinions amongst the carers since the first op ; he visited the theatre again yesterday . BY then , he has already developed multi organ failure and needed quadraple inotropic support. The Op findings matched with what we suspected earlier.

When I escorted him back from the OT ; I knew the night would be a nightmare. He arrested on the table and a short CPR was done ; luckily his eyes were still reactive then. On arrival to his room ; he just bled from everywhere - and seeing fresh blood coming out from his ETT ;was a sign that his deterioration is irreversible.

" Adrenaline shoot fast..... continue CPR... my saturation... my pulse please... "
Being the standard protocol of CPR ; the ICU nurses were used to the routine and it was good everybody knew their role. But the patient was going nowhere as he was not responding.
I looked around at 130am yesterday , in the tense activity , knowing sakaratul maut and izrael taking their turns . His "roh" taken away , leaving the body lifeless. All that happening in a split second , without any of us in this dimension realizing it.
Lailahaillallah... Lailahaillallah....
Pulse ? none felt..
BP ? no tracing..
SPO2 ? unreadable..
pupils ? both 5mm.. fixed dilated.
Any spontaneous breathing ? No trigger... no chest rise..
ECG ? straight line... asystole....

Interestingly, we have a same ischaemic bowel patient, in his 30's and had almost all his small intestines resected for few times, there was no end. Unfortunately, he is a foreign worker. Our country can only feed him TPN till he's out of the hospital. Sad ending, hor? But life is still beautiful...