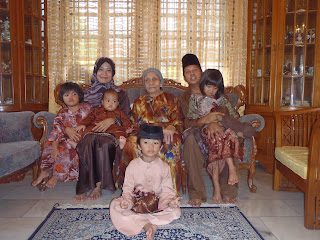 Salam Aidilfitri to everyone! I am writing this blog entry in Muar at the moment. There is no broadband connection at my grandmas but I can’t seem to sleep after Subuh. Mak Tuk and Mama is having a conversation early in the morning. Mak Tuk’s senility is not as bad as how it was last year. One thing I respect about her that she never failed to wake up dawn and perform her Suboh prayers and proceeded with her wirids. Without fail everytime I am back here. And despite her poor memory span now, she never forgot the Quranic verses and perhaps this helps her not to deteriorate. I should have brought Dr M’s autobiography with me as Ive only managed to glance through 4 chapters so far. Here I am on my lappie doing this draft as it is now so that I can post it later when I have the internet connection.

Everybody is still asleep. I slept in the living area; or “lambak” they call it. It is one of the fun things to experience going back to kampong. I am really thankful that my grandma is still alive at the age of 84. She is the sole reason all of us go back to Muar and I am thankful that at least my children will have the memory of what kampong raya is really like. I guess as long as she is still around my extended family will take the effort to be here together. If Mak Tuk is not around anymore, I’m not sure what will happen to the Muar home. I’m sure one of my uncles/aunties will stay here but the atmosphere and spirit will be different. Until then, it will be Muar for us every raya.

I guess the reason why I can be so nostalgic about Muar is because of the time I spent here when I was young. Mama will always send me back to kampong during the school holidays and it will be from 1 week to 2 weeks. Most of the time, I will be alone here in Muar unlike in Melaka where I have En. It can be boring at times because I don’t really mix around with my age group there but somehow I managed to entertain myself then. Remember that this was the period when there was no internet and video consoles! I must have read anything which was readable here.. hahaha

I still remember when it was still the old house. Its design is like a big extended studio ; all the way to the kitchen. The living area will be turned into area for “lambak” after 11pm. Mind you at 10pm, there are visitors who will throng the house! There were two toilets (well till now there is) one would be the more modern one with pipe and another which is very traditional with a tempayan there. It had green motive as its overall colour and somehow I do miss that old toilet. I had preference for sitting toilet rather than squatting ( hahaha..typical town boy) so when my favourite toilet was occupied, it would be agony for me to hold on. But when there is emergency, I had no choice!
Arwah Tok Abah will wake up really early and go to town to get pau, nasi lemak and paper. I will be the cucu who will wake up early and follow him. I guess that is the special bond I have with him at that age. Most of other cucus will still be sleeping when we did this activity. Well, I didn’t do anything much just sat in the car as we drove around town. Pak Man when he was well used to bring me down to Tanjung but I cant remember what we did there. Just being at the jetty side was good and I guess that’s why until now I have a kind of affection with Tanjung whenever I am in Muar.

Well, I just had to put it down in writing what I felt this morning. I want to cherish it and make it a permanent one with this entry. Insya-Allah, god willing if Mak Tuk is granted a healthy bill of life, I will be able to blog more entries of such with the coming years.