It was a big weekend for Sports !

The Springboks won the Rugby World Cup in the most boring fashion. It did not help much when the foe was England !! Hahaha.. Only penalty kicks and no tries .. Modern rugby they say as long as you win the game. In Formula 1 , Raikonnen won the world championship in the most unlikely way. Before the match he only had a mathematical chance but then he was up against an English team and Hamilton , the English driver. Who else in the world can f**k up at the very last minute ? Hahaha.. Kudos to Raikonnen as he deserves the championship. Whoever had him as their bet must have won lots of money !!
On home soil , Stoner was awesome winning the MotoGP but elsewhere , Malaysia football was not good enough for World Cup as they suffered a heavy loss against Bahrain in Manama. There goes our World Cup hopes and a pity that the return leg next week in Shah Alam ; supporters will not fill the stadium . 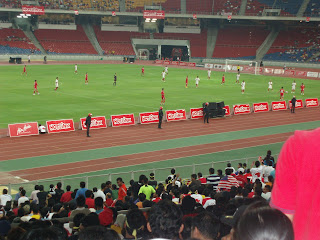 I had the opportunity to be in Bukit Jalil watching Myteam2 against the Indons. Indons had theit under 23 team playing against our kampung boys. Sad to say , our kampung boys remained as who they are ; totally outclassed by a half hearted Indonesian team. It was still however a joyous experience to be amongst the 40,000 population , and the fun of watching the game remained the same. It was trulyRAYA with all the fireworks fired up !! Sakit jantung tuu.. I wished that we had given more fight. Maybe it was a funny thing last year challenging our national team , but i think this year it is not funny any more. Its sad to go out as no hopers and end up as a fool. A good food for thought to the think tank.

I must say , even the pathetic diplay by myteam cannot match my patheticness after the game. Somehow or rather , I embarrassed myself when i forgot where i parked my car !! Ended up like a headless chicken , figuring where in the hell did i park my car ?? hahahaha.. Wonder what got me distracted ?? 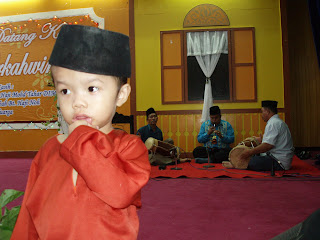 Was it you who I saw being carried upon by the hardcore Myteam supporters ? :)