The departure from Shira camp was memorable. After the morning briefing before we were about to leave, Joshua and his crew sang the magic "Jambo Bwana" song. It was lively as everybody participated and danced to the rhythm of the song. We were not fully fit but we were jumping around with the guides and porters! The sun was shining bright and the weather was cold and crisp but we did not bother that! And began was the journey to Baranco camp. The journey from Shira (3766m) was to Barranco (3983m) but we will go above 4000m before descending as this was appropriate for our acclimatization. 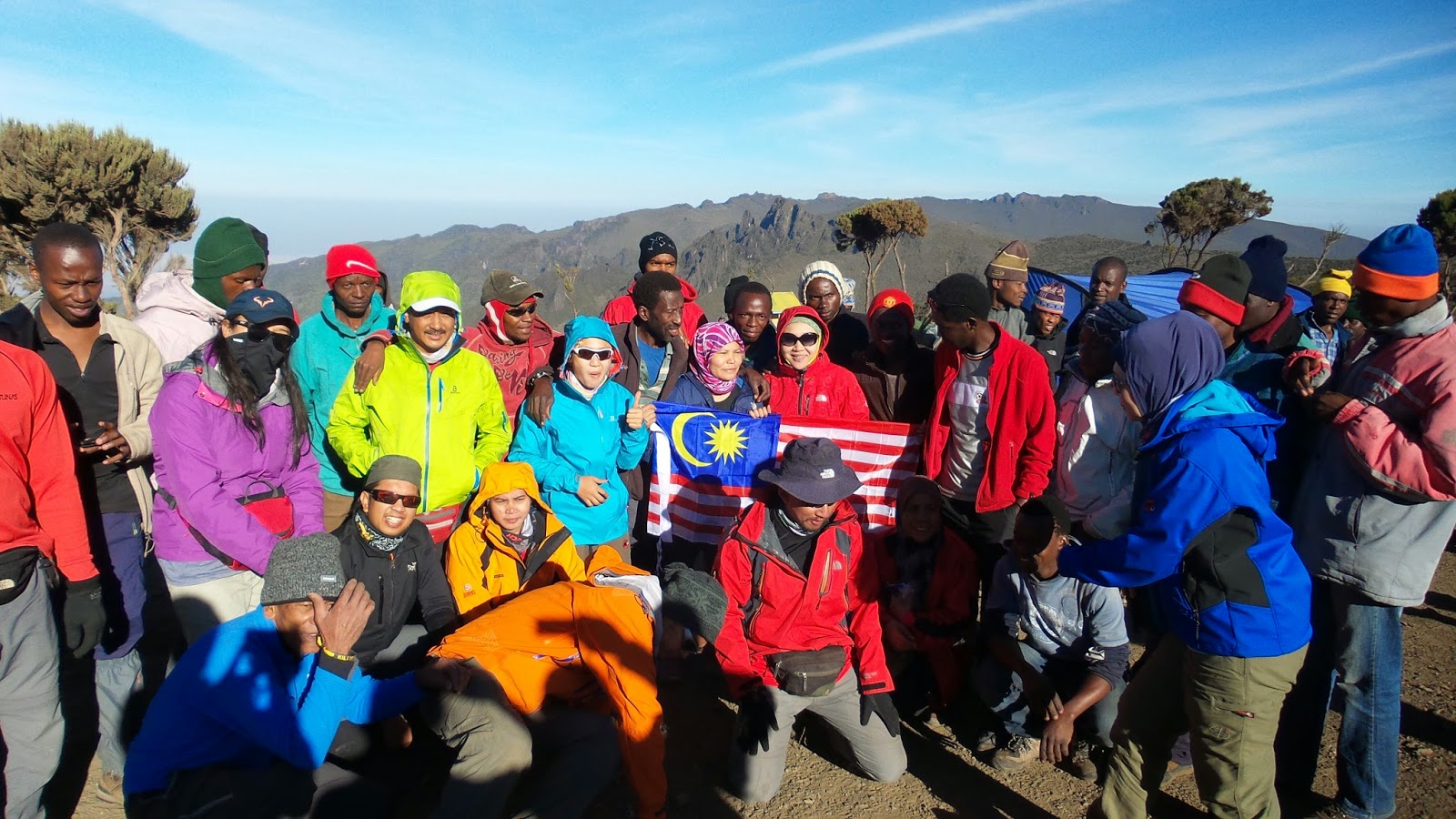 The journey was tough as again it was high and low with the sun shining bright without any cloud filter. I was walking with Azad and Mtey the guide. Of course, the scenery was legendary but knowing that we were still far away was not a sounding factor. Azad was dehydrated from yeterday's travel and to control his AMS symptoms, we needed to really move Pole Pole. 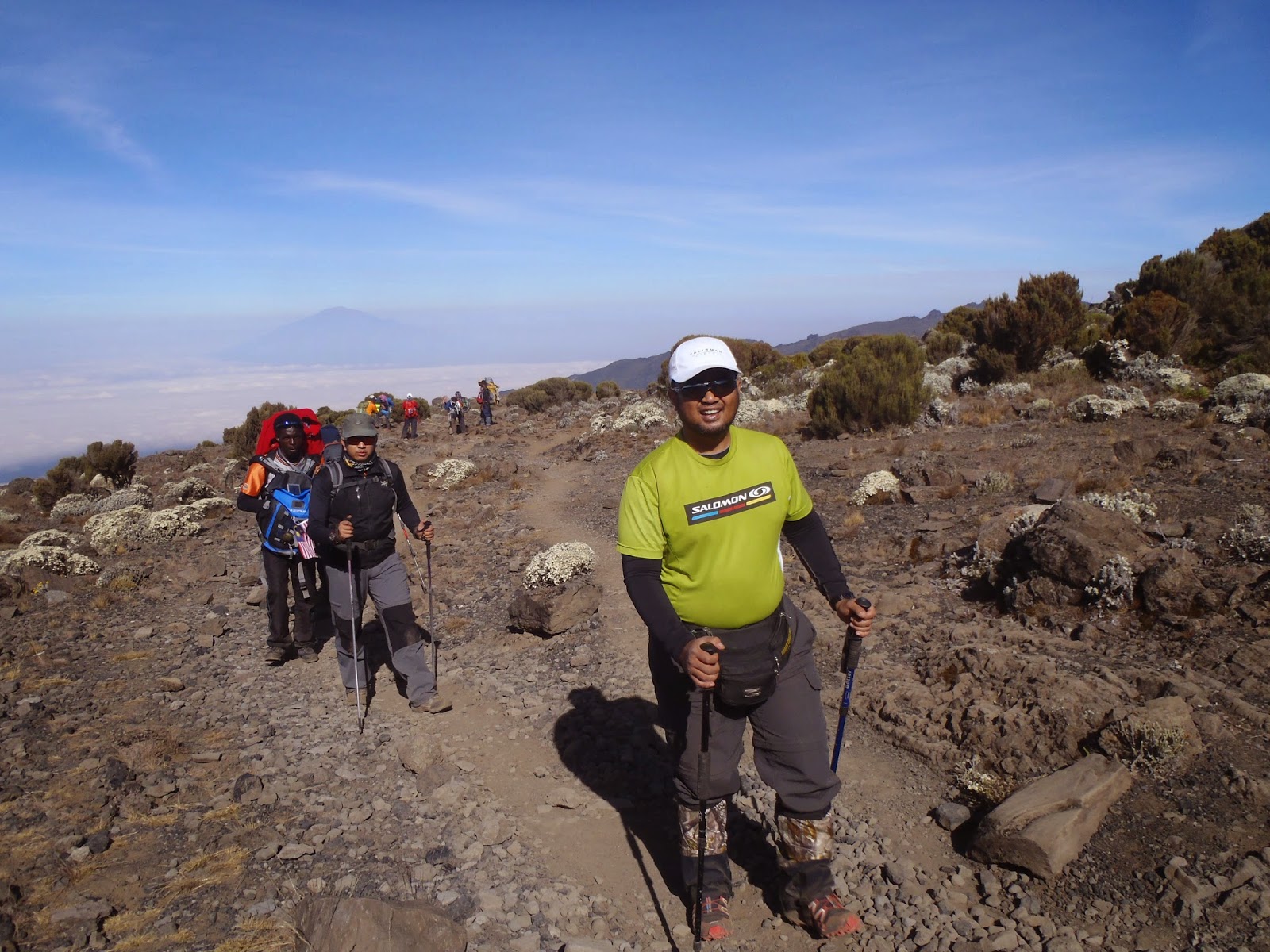 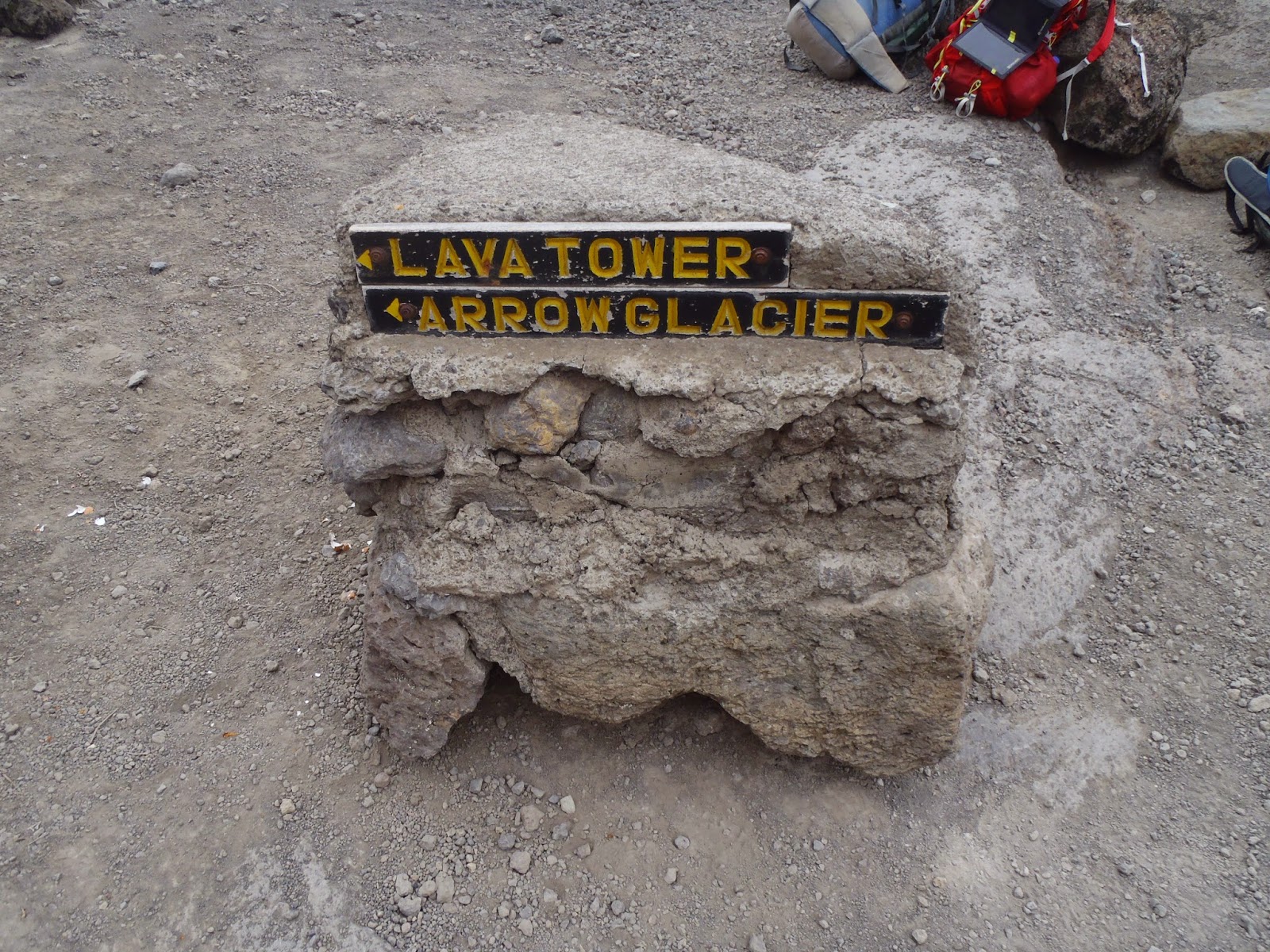 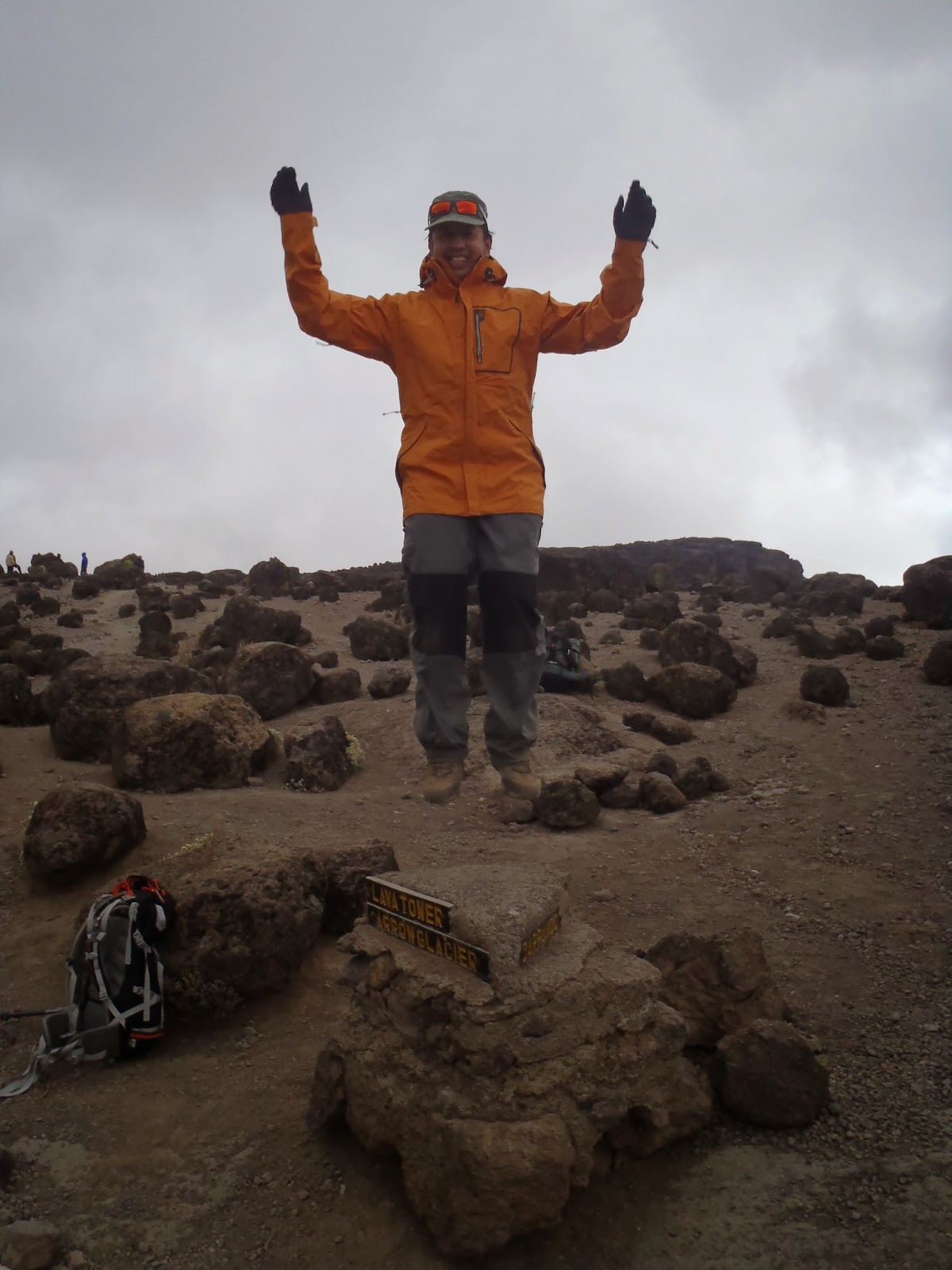 We were supposed to climb up to Laya Tower (4600m) but because the pace was not as how we wanted it to be, we bypassed it to go to Baranco camp. The junction was already above 4000m so Deeno as the team leader decided that the team was good enough to acclimatize without going to Lava. The walk to Baranco camp was never ending as Mtey keep saying," Yes Azad.. another hour to go... the camp is just there.." And for hours we walked without the slightest sight of the camp! It startedto snow as well and made the journey cold and wet! Something you would rather not have during this period of fatigue. 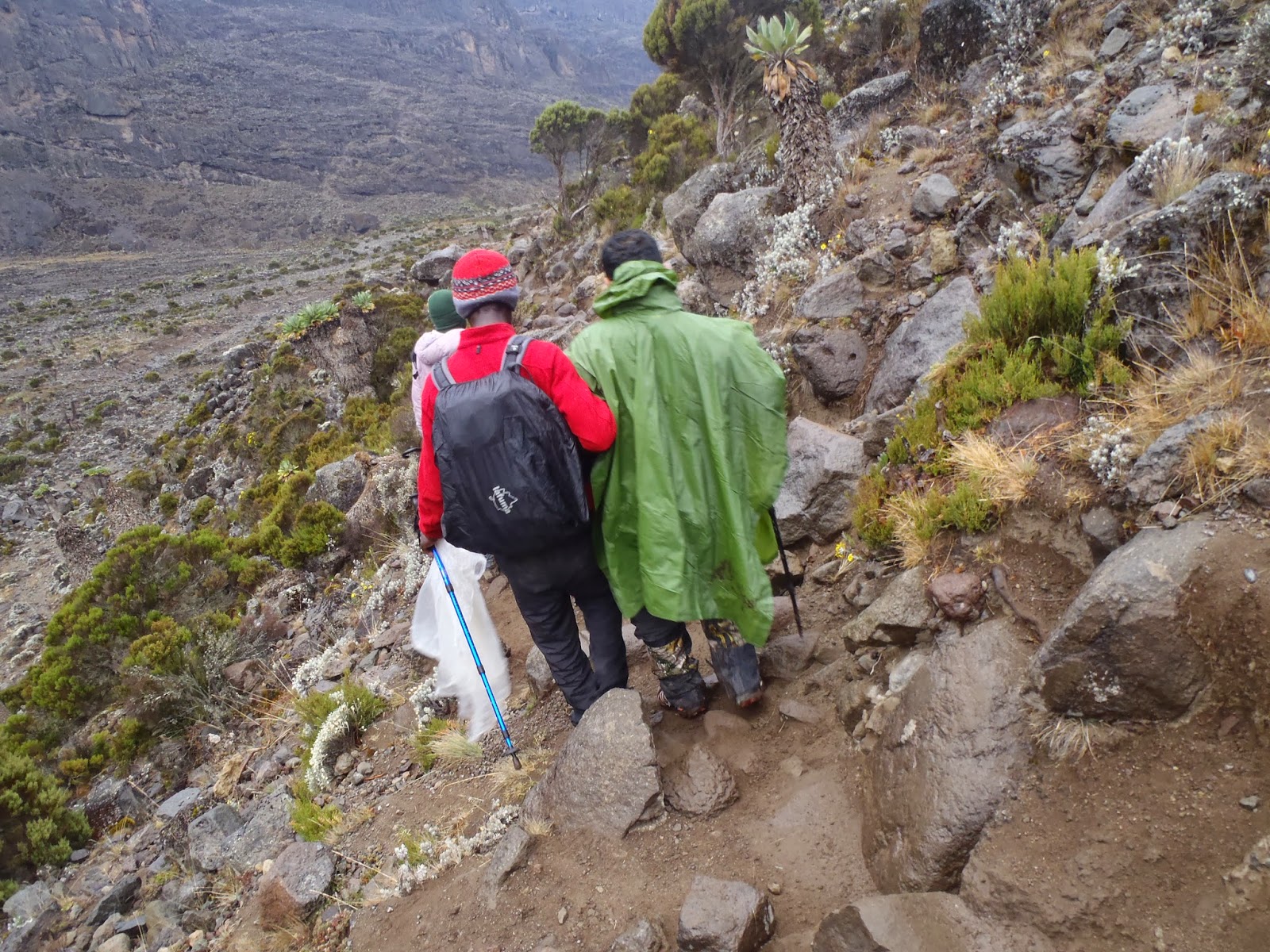 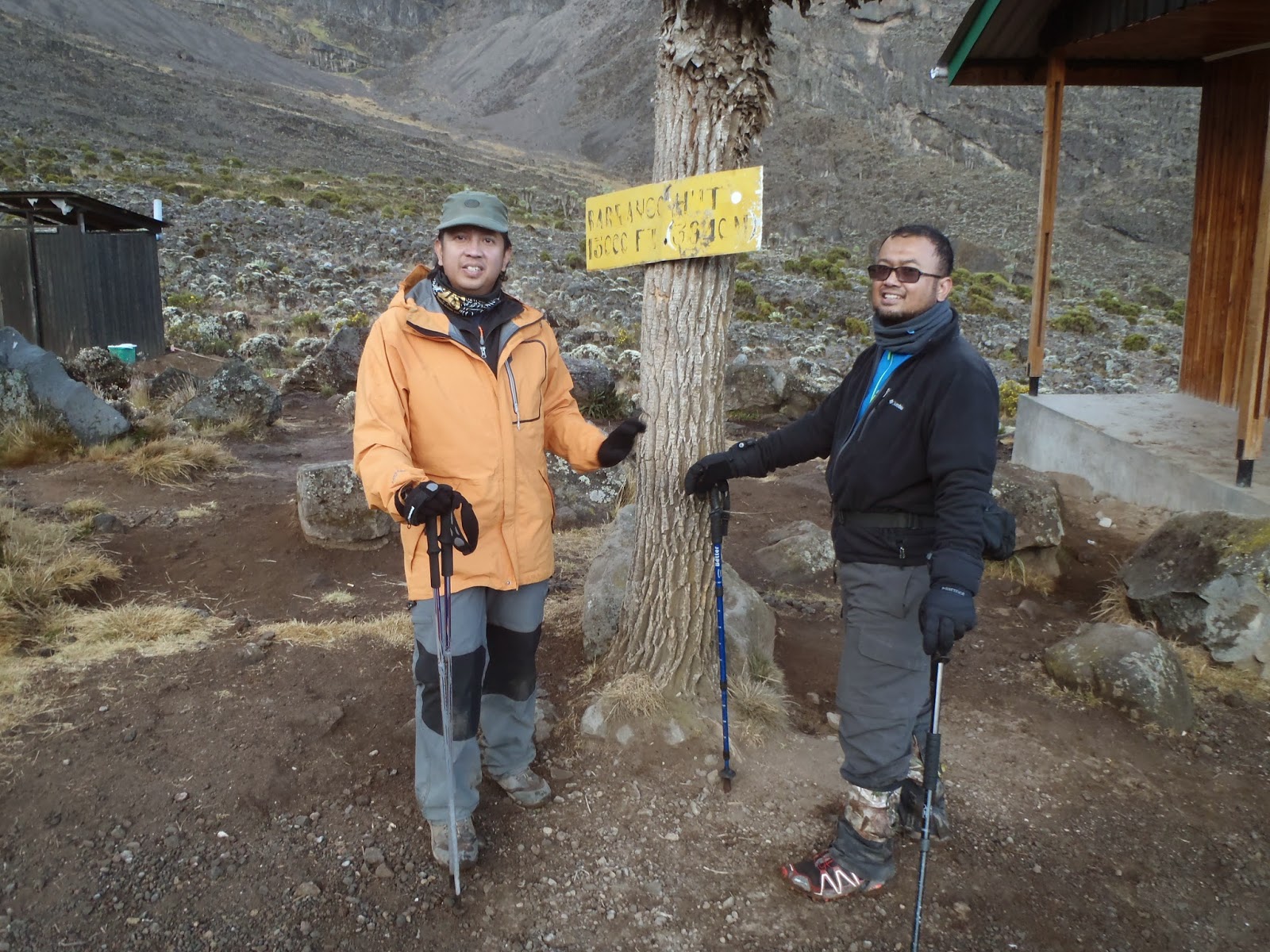 We reached the camp at 6pm and it was such a relief! What i was keen on was the scenery as this camp was hidden in between the valleys at near 4000m above sea level. Simply breath taking. Kilimanjaro peak was certainly our background. Looking at the majestic peak of Africa, some of us were doubting whether we can achieve it in the next few days. 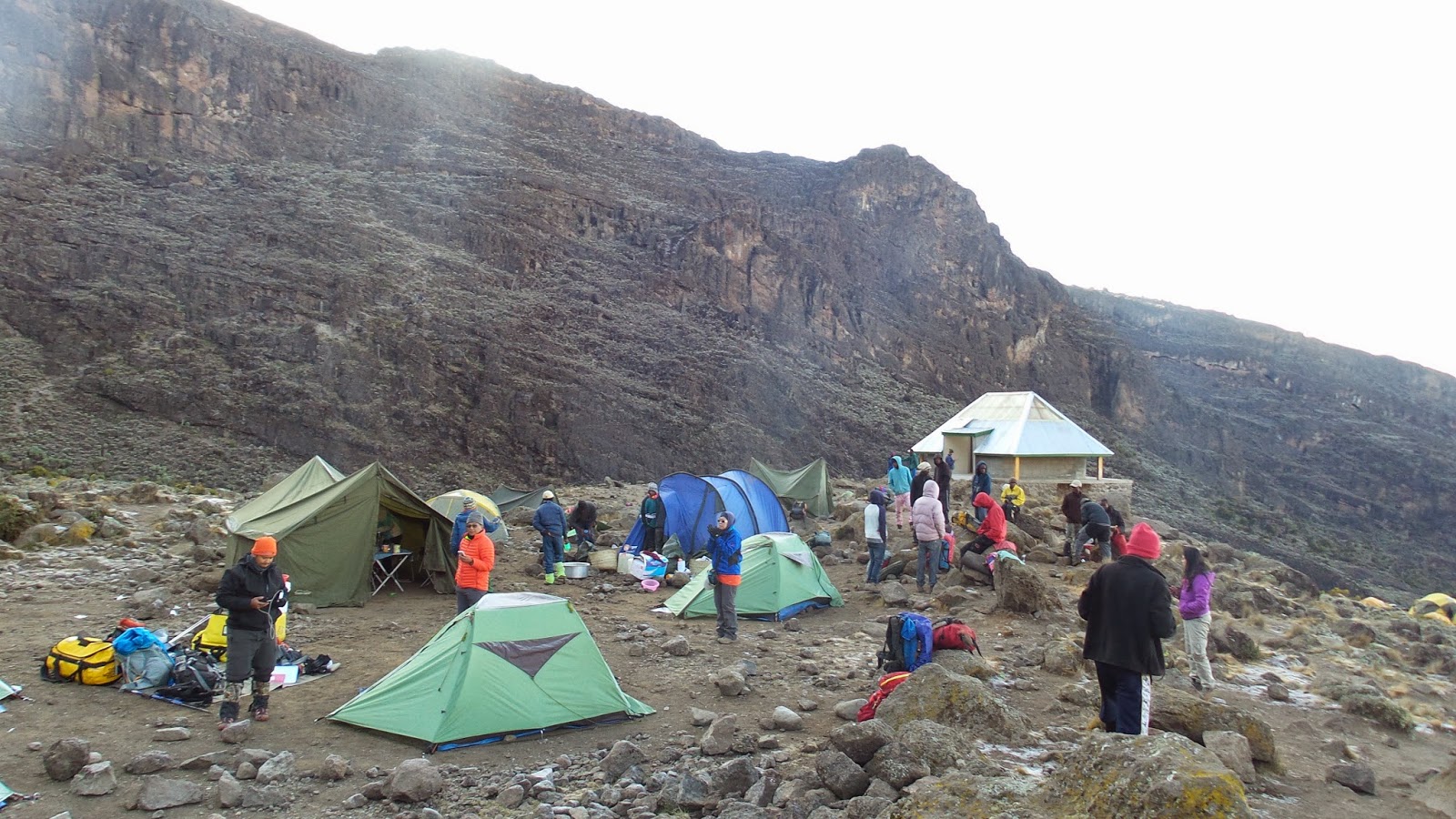 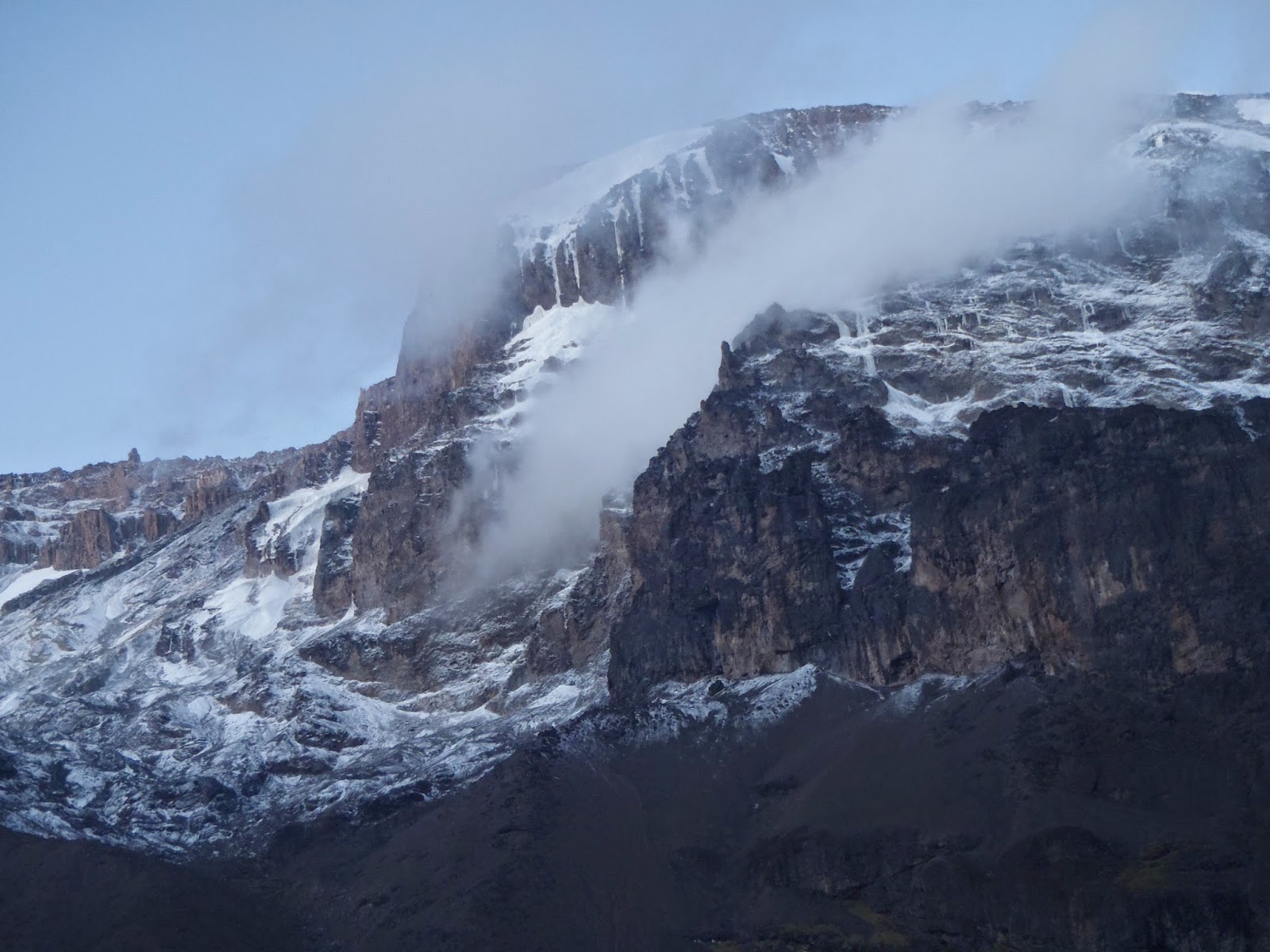 The trek to Barafu camp the next morning had its unique challenges. The first was to climb the vertical Barranco wall. It was not technical but we did not have that much room to walk. the pathway was small and we were lucky that it did not rain the night before. The view was amazing and i wouldn/t know if i want to repeat it again as we ascend to 4800m above sea level. Barafu camp would be the base camp before we summit. Few of the team members were superly exhausted. I had to give Abie his daily Arcoxia dose for him to survive everyday. It is amazing to see how he recovers overnight and fit and well to begin the next day's climb. 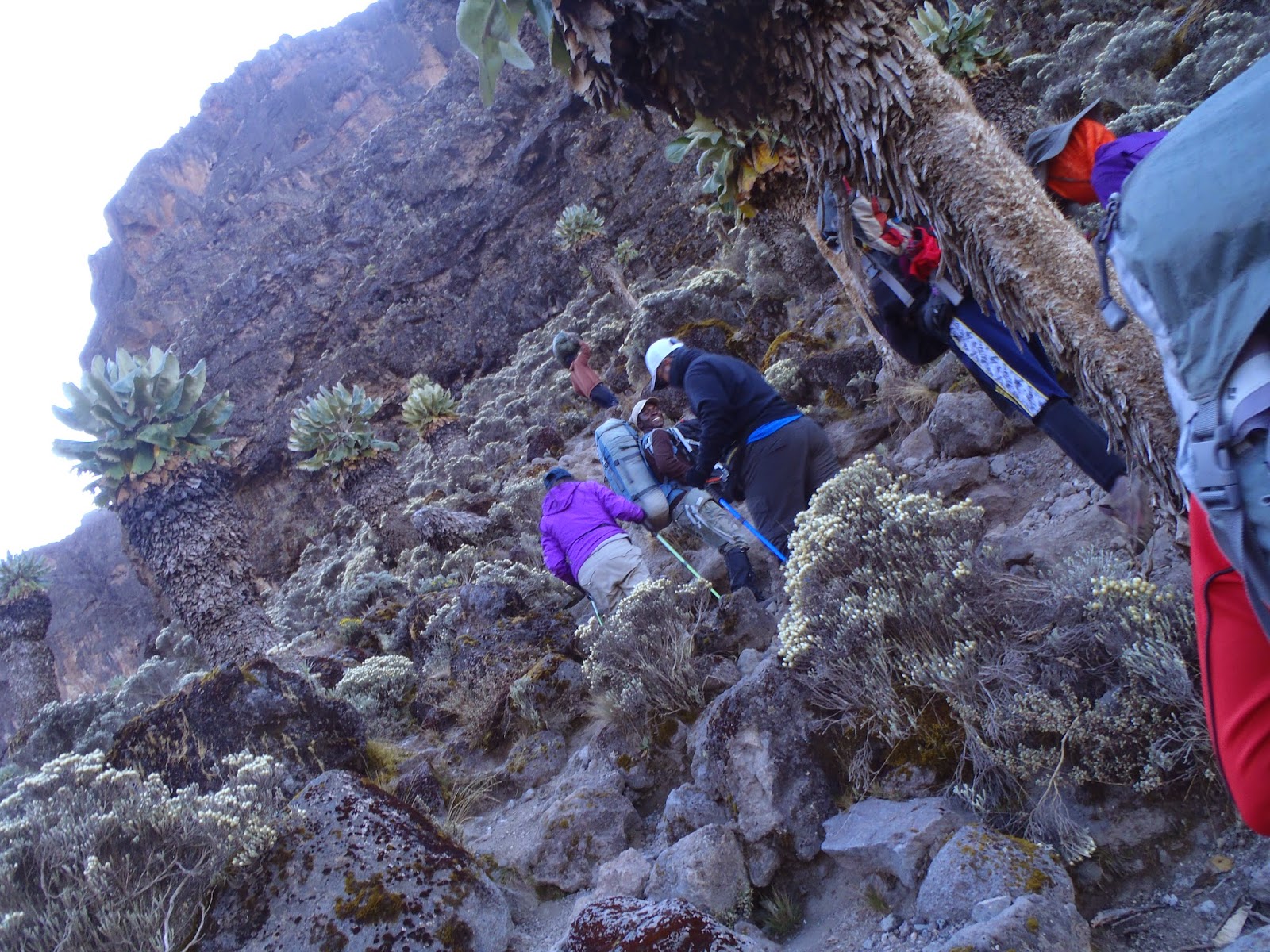 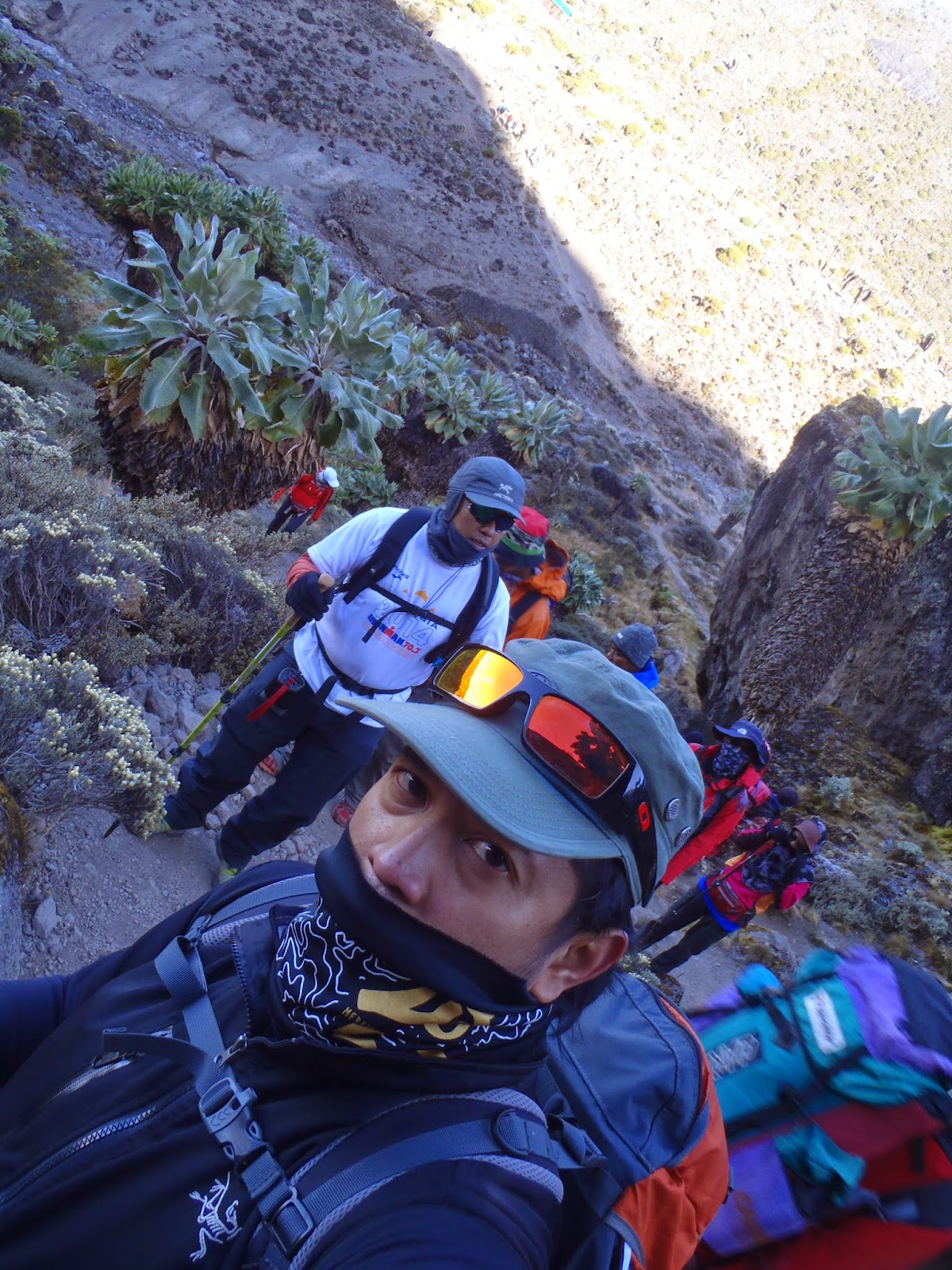 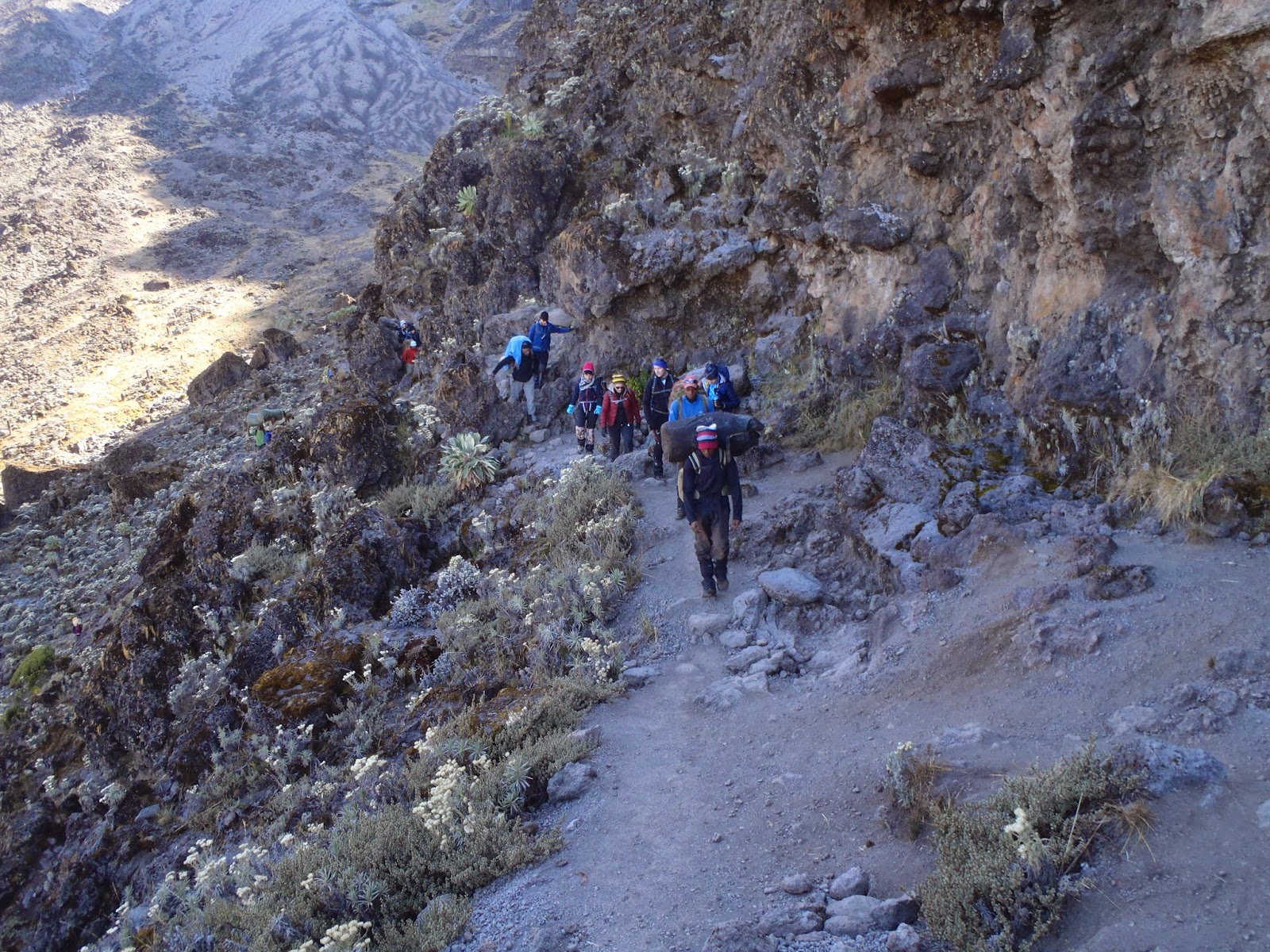 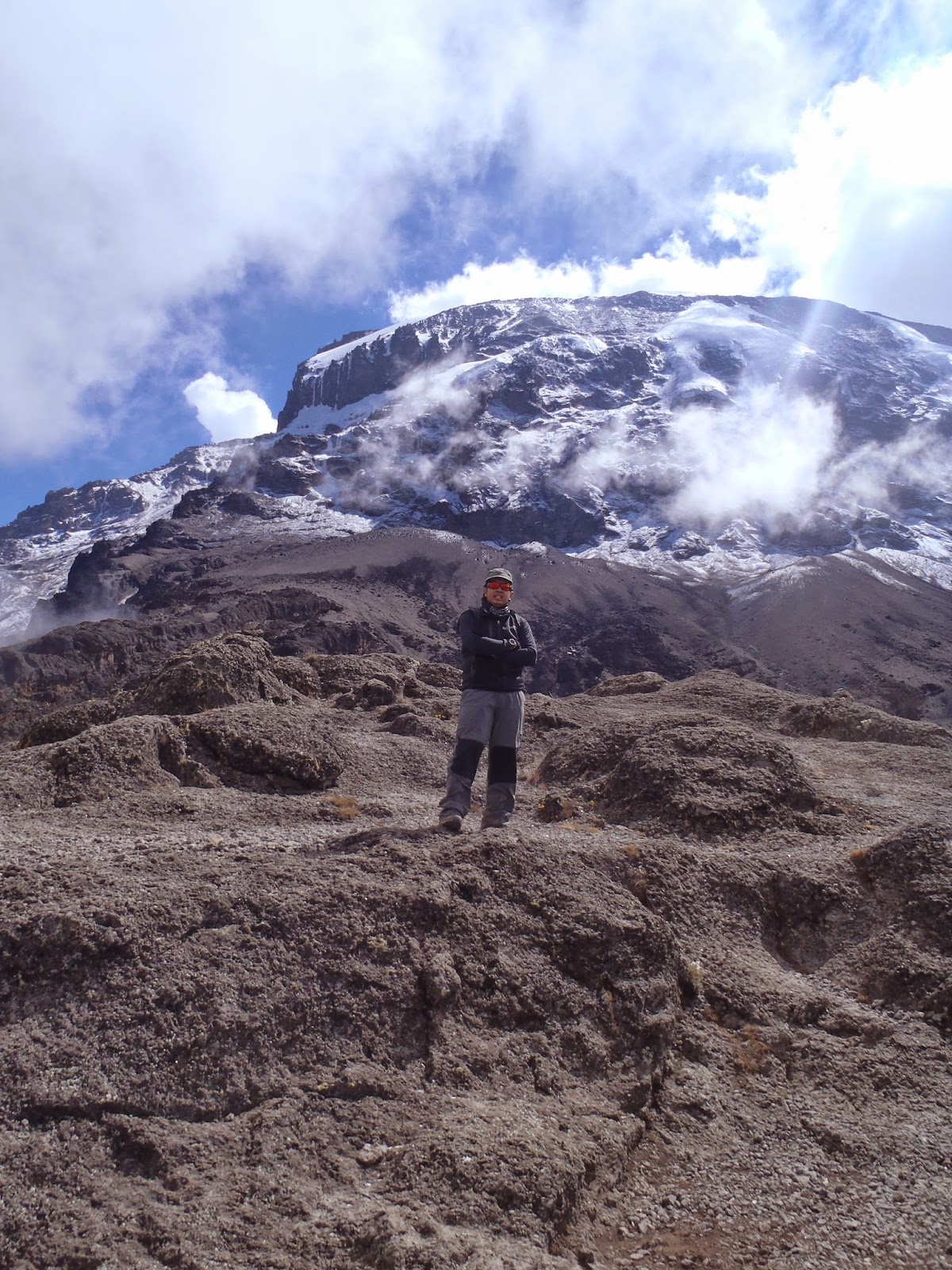 Midway climb, we arrived at Karanga Hut which where we planned to have our lunch. Everything was set when suddenly the rain hit us hard. It was heavy that the ground was flooded! Imagine flood at 4000m above sea level! hahaha And of course, there would be snow and that was what greeted us till we arrived in Barafu. It was becoming colder as we went.At this point, I have moved with the front group.. namely Kicok, Mawi, Azman, Kak K and Tokki who i guess were the fittest amongst us. 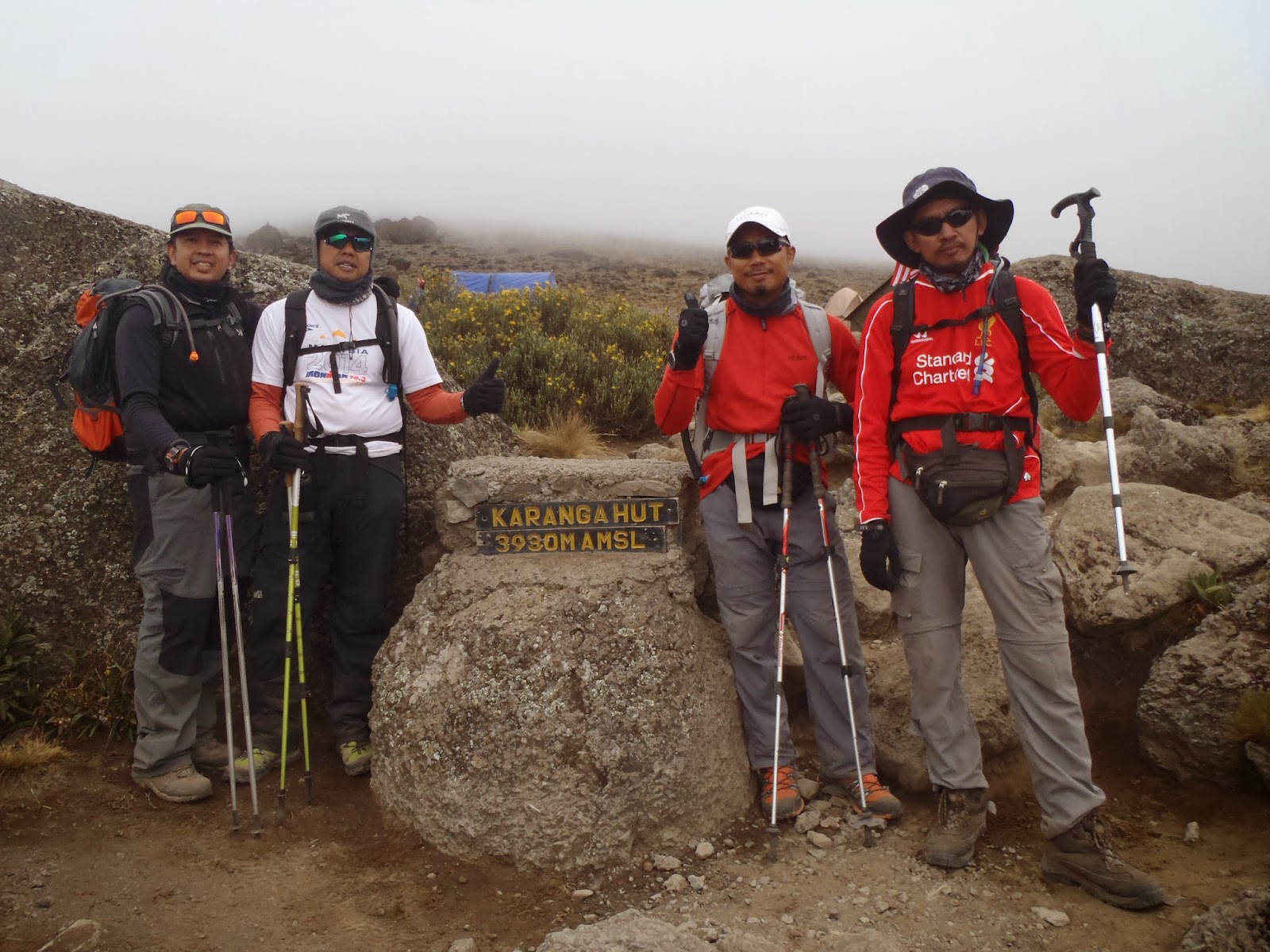 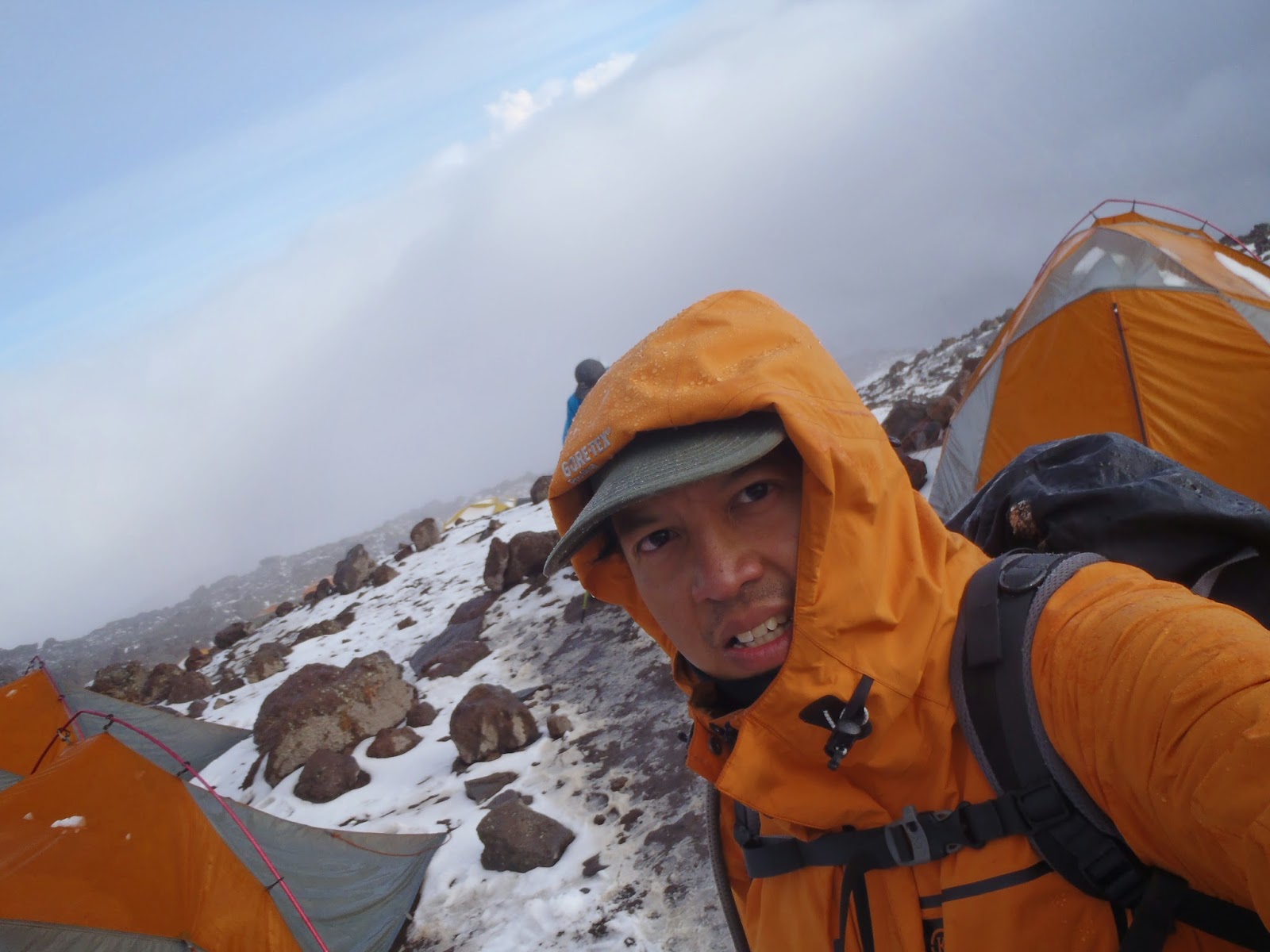 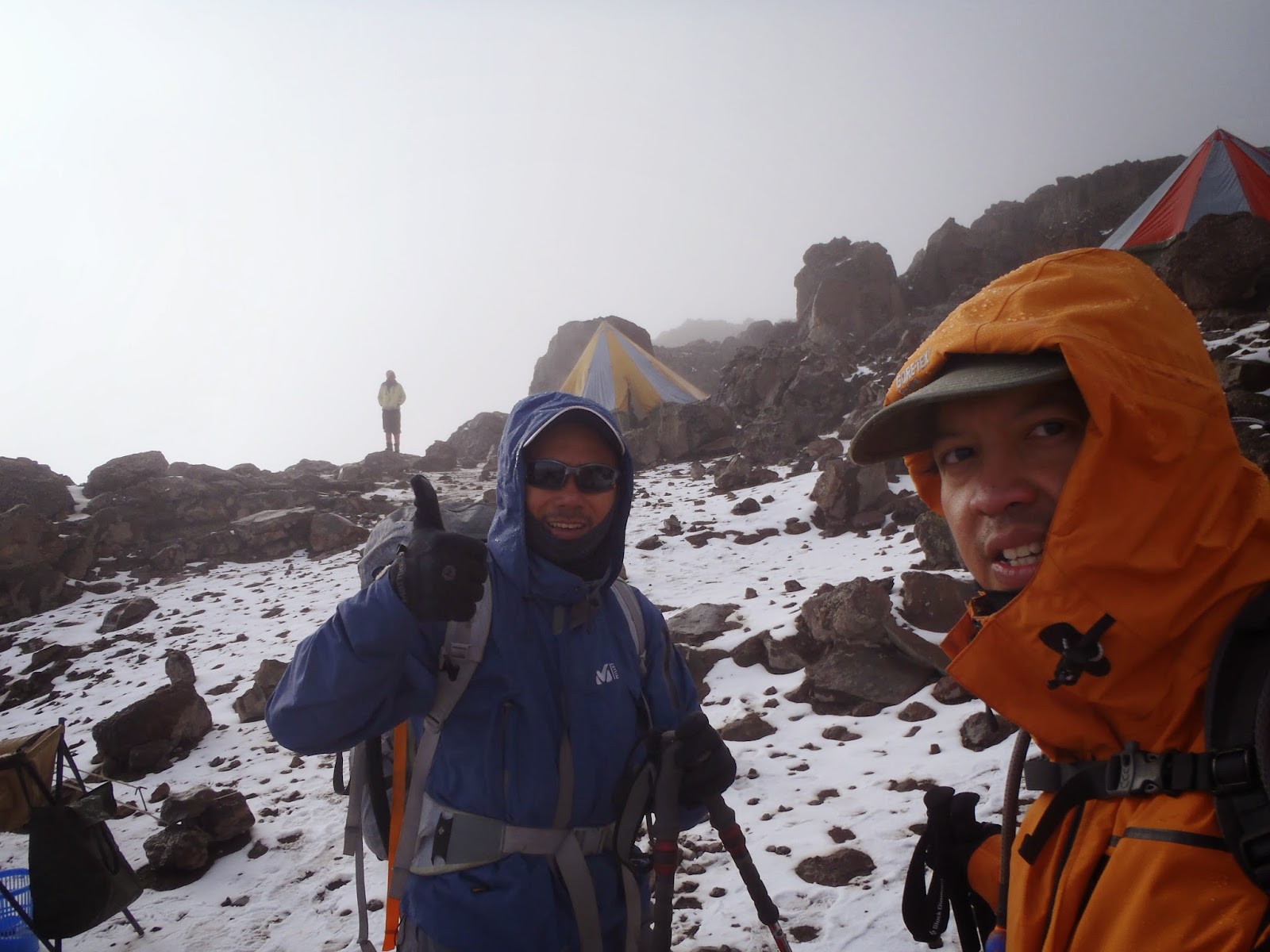 We arrived in Barafu at about 4pm. It was cold.. so cold that i was shivering like mad eventhough i was wrapped in Azad's sleeping bag.(my bag has yet to arrive). I did not have a carry mat with me and i guess.. NOW I KNOW.. why you bloody need the carry mat! The ground especially the hard stone surfaces were really cold up to one's shivering spine! Down jacket is definitely the best to be used! Most of the team members arrive quite late in the evening and i can see how exhausted they were. And imagine.. we were supposed to start our summit at midnight with some rest in between... 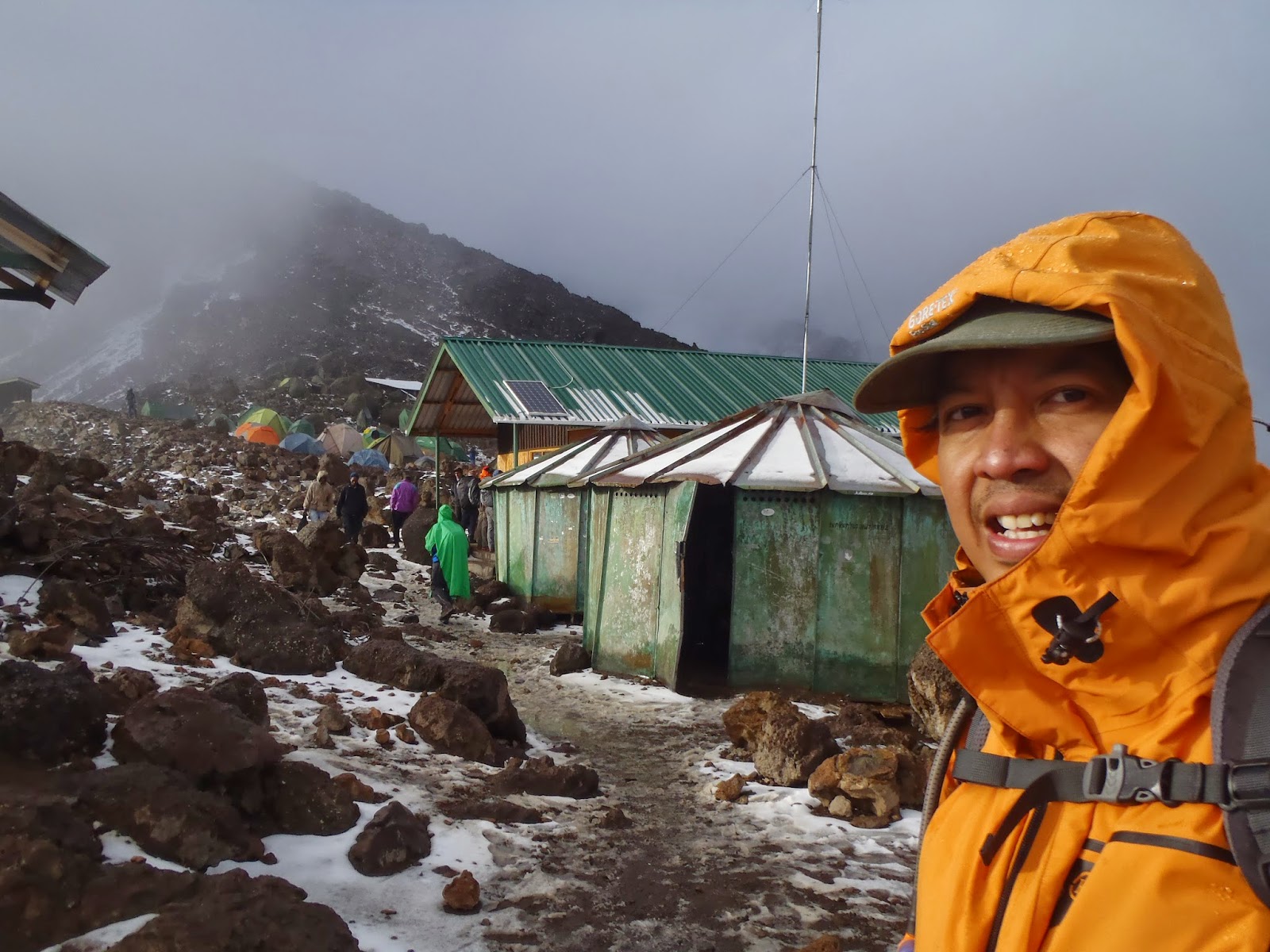